Wyndham Lewis demonstrates his aptitude for unsentimental depiction in ‘The Crowd’ (1915), showing us a conflict between two factions.

The people, however, are displayed like Tetris shapes. Dronelike, mechanistic cogs or insects, it is the modern industrial city which emerges as the main protagonist of the piece, rising up and dividing the people as it ascends. Lewis doesn’t appear to take sides; the perspective offered to the viewer is a god’s eye view, more like turning over a rock and looking down at the writhing mass beneath than being connected or subject to it oneself. 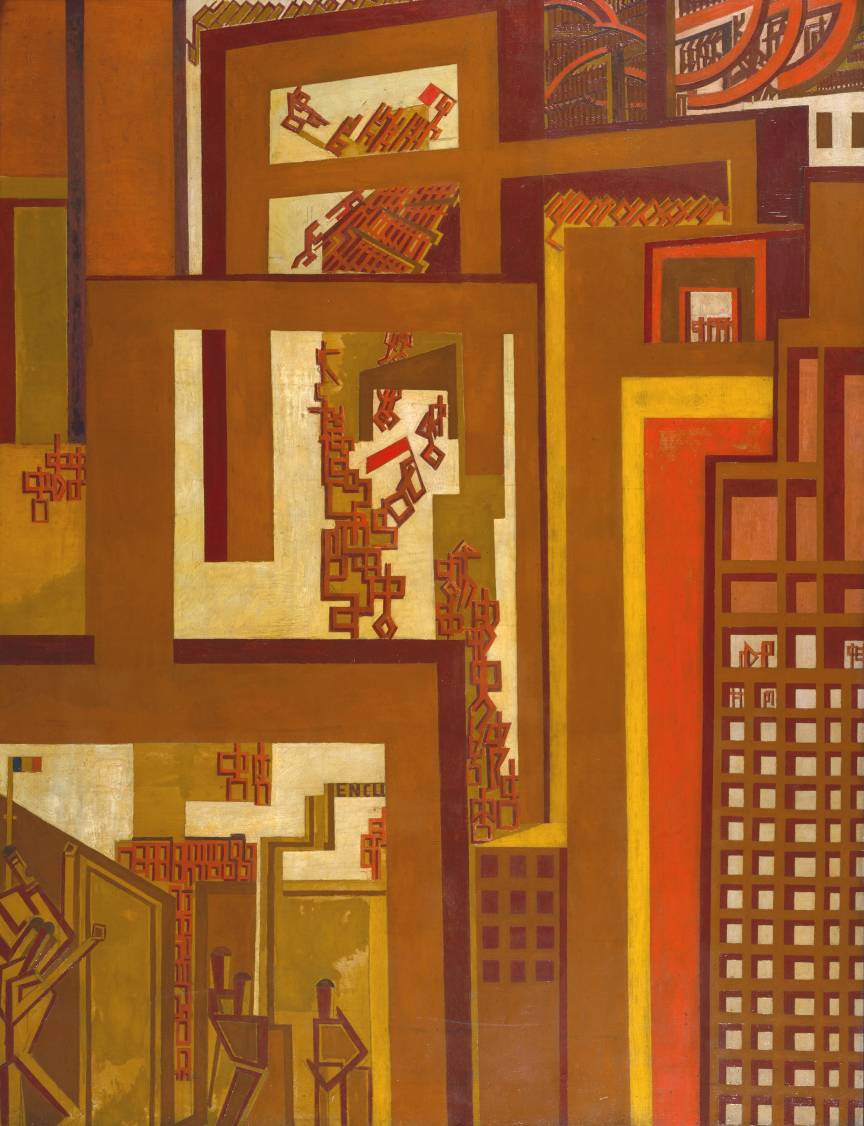 As if to offer a chilling conclusion to that division and the thrall-like violence of the blank figures we see ‘Inferno’ (1937). This image might be the outcome of the drone conflict in ‘The Crowd’, a great pillar of blood red emanates from piled up bodies whose dead faces seem to mock the viewer’s assumed sympathy. There is also something unsettling in how that image seems to predict a scene which, while fantastic at the time, would become real in the years to come with the full extent of nationalism, WW2 and the Holocaust yet to unfold.

While stylistically the images are quite different, the apparent lack of identification Lewis has with the protagonists is common to both images. These images prefigure much of the Chapman brothers’ output and show a precedent for the so-called brutal tragic comedy (which brings the Chapmans much praise for its apparent originality). Jake Chapman, for example, talked about removing Goya’s¹ heroic ego from the old master’s famous ‘Disasters of War’ series, which in its original state clearly depicts the artist’s cataloguing of horrendous events, subject to his enlightenment morality. For the Chapmans however, “…we cannot hear Goya’s words and cannot learn from our mistakes – we can only denounce the violence we are condemned to repeat…” – Jake Chapman, Insult to Injury: the Marriage of Reason and Squalor, 2003.

In this gesture they (the Chapmans) eliminate the dignity of Goya’s artwork and the potential for, in their minds, a false kind of identification or pathos which would decrease the real horror of history. In what sense is this a problem? The gesture only achieves replacing one so-called fake defensive position: lame sentimentality (the ability for the viewer’s horror, shock and ultimate agreement with Goya to contain the idea of war within the territory of meaning, in short – to avoid trauma) with another, assumed distance. A kind of Pilate’s clean hands approach to the social field.

The Chapmans repeat the mistake of Lewis himself; they allow a privileged position or perspective to become a sense of elitist superiority, they open no doors for the viewer (unlike Lewis) and, like the aforementioned Perry or Baddiel, they represent a different style of rejection to project making or, if you prefer, to responsibility. 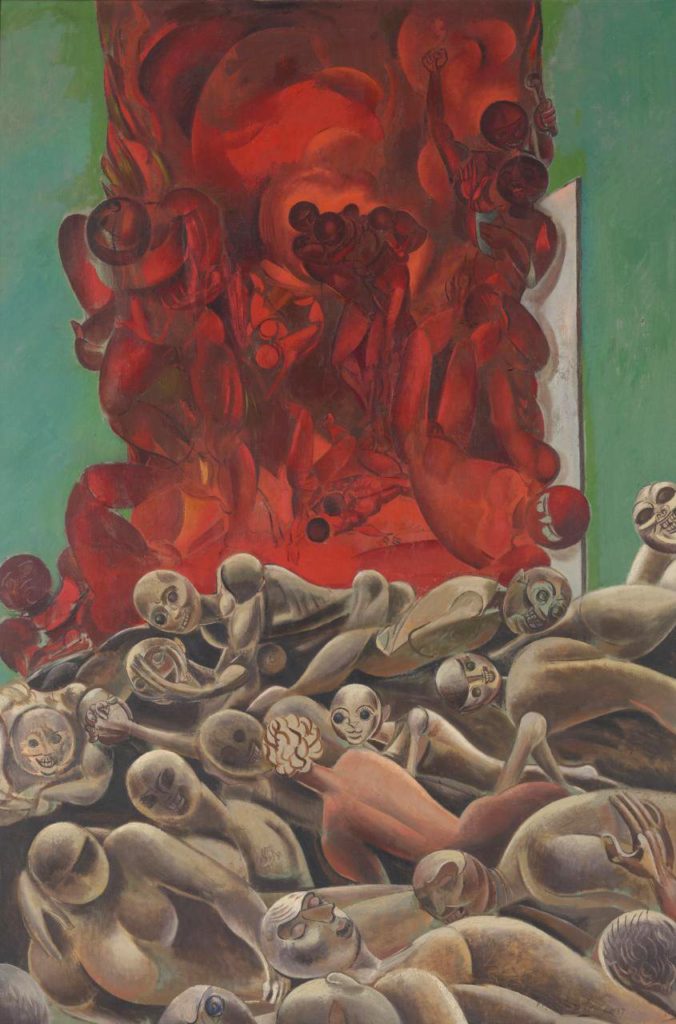 If Grayson Perry won’t tell us what to do because he respects our right to ignorance, and Baddiel won’t become the great modernist writer for fear of transforming into an ego monster, then the Chapmans simply join this pair to make a holy trinity of impotence. For them, we aren’t even worth saving at all! We are simply doomed like lambs to the slaughter.

The horror confronted (man’s inability to escape the sausage machine of history) is not so deluded as the horror avoided. Even the Chapmans’ brutal black hole of an oeuvre, if identified with, gives the viewer this distanced perspective – a sense of separateness from the mechanisations of the automata. A sense of us, of safety from the mass. Jake Chapman confirms this. On being asked by Mark Kermode, ‘What do you want people to take from the work?’:
“A small group of people will go away with a smug sense of robustness” (Jake Chapman interviewed on The Culture Show. 2007.) 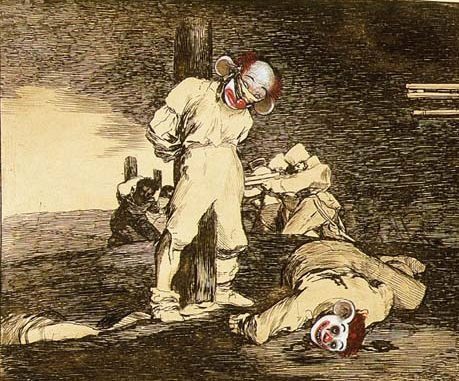 Their practice might have some of the overintellectualised superiority knocked out of it when seen as a huge defence against the need for a positive project and the will to make it happen. Instead it’s just another, albeit veiled, form of affirmation for a slightly different audience². All three practices represent a certain kind of rationalisation of why they won’t build a positive project, evidence that so many creative voices are still suffering the aftershocks of two world wars and the holocaust. No one wants to be responsible or even wrong, and that is stultifying for the audience.

However it is also worth pointing out that the position of the Chapmans doesn’t work even if they really are as misanthropic as they pretend to be, since the distance opened up by their work is purely performative, for show. All that vitriol and scorn for the enlightenment or religion does nothing to actually protect them or their small group of robust, smug audience members from either history or the future.

Although Wyndham Lewis himself is often bitterly negative about the masses, and has little good to say about the political or educational programs which attempted to advocate for them (“Revolutionary politics, revolutionary art, and oh, the revolutionary mind is the dullest thing on earth… What a stupid word! What a stale fuss!” – Wyndham Lewis quoted in ‘Modernism, Cultural Production, and the British Avant-garde’ By Edward P. Comentale.), he did propose a positive project to his audience, twice trying to get this off the ground (1914 and 1920).

Vorticism’s dynamism its aggression and atavism was an attempt to take deadly serious the implications of abstraction and the way image making might express a mentality affected and changed by modernity. There is both a desire for something new in Vorticism (especially in the context of a rather dry Edwardian art scene in England) and a re-positing of a primitive or rather ancient energy in the arts. The inclusion of jagged diagonals, simplified forms and bold colour brings to mind the violence under the surface of a culture channelled and transferred by the Vorticists into the sphere of art. It marked a shift brought on by many prompts, among those Lewis identifies:

The Relativity theory, the Copernican upheaval, or any great scientific convulsion, leaves a new landscape. There is a period of stunned dreariness; then people begin, antlike, the building of a new human world. They soon forget the last disturbance. But from these shocks they derive a slightly augmented vocabulary, a new blind spot in their vision, a few new blepharospasms or tics, and perhaps a revised method of computing time.

– Wyndham Lewis, “The Great God Flux”, The Art of Being Ruled.

Lewis’ relationship with the sciences and technology is sceptical, and this is important in acknowledging what makes Vorticism more useful that Futurism to modern creatives keen to avoid the stalemate described previously (Perry, Baddiel and Chapman).

¹The Disasters of War ( Los desastres de la guerra) are a series of 82 prints created between 1810 and 1820 by the Spanish painter Francisco Goya (1746–1828). Goya protests the horrors of the Peninsular War and its effects on the human psyche.

²Perry affirms an audience eager for superficial identification to whom he panders decorative works that parody or make homage to folk culture. This is also reflected in his programmes, that often include confessionals meant to humanise the people in question. Baddiel in his turn, is affirming a type of artist/audience who likes to think they fall short of greatness because they are morally superior or intellectually less eccentric than the egomaniac creatives they secretly admire. The Chapmans simply complete this triad by appealing to the ironic and cynical and reassuring them that their passivity is probably justified, since anything else will lead to another failed utopia. What a mess we’re in!