British Artist Gail Olding born in London, studied for her BA (Hons) at The London College of Printing in Photography in the late 80’s and during the 90’s went on to study at The University of Westminster and Central St Martins to complete two MA’s in Photography and in Fine Art.

Olding studied painting with the Painter Hermann Nitsch in Austria, whom she also assisted. She has worked with and assisted the late Photographer Fay Godwin. She was nominated for Becks Futures in 2003 and won the Eastern Arts Award in 1999.

Gail is currently a guest student/associate at The Kunst Academy Dusseldorf studying with Georg Herold and Richard Deacon. She also works as a lecturer and lives and works in London.

Gail has exhibited and had work published nationally and internationally. Olding is currently represented by Thompsons Gallery (Marylebone) and Avison Gallery (Highgate) and has been asked to show with the European Cultural Centre at Venice Biennale 2024.

“I made the piece at my studio which is on a farm, during lockdown in May 2020. It was inspired by reading the gospel of Mary Magdalene and happening upon the Vesica Piscis; the point at which two equal circles overlap. This is known in the scientific community as the womb of the universe. It is where all mathematics and geometry are born from. It is the birthplace of creation, making it the centre of the universe.

The sacred feminine is explored, highlighted and celebrated within this work. Its success lies in its inherent ancient symbolism, which creates a point to ponder the boundless, the limitless and even the possibility of magic. Circles represent god in sacred geometry, no beginning and no end. Things move in circles as cycles. Planets, suns, life, etc. It is important to me because it contains a certain spirituality, a realisation of the boundless. It is both peaceful and sexy. Simple and complex.”

Artist prints are included free with each subscription. 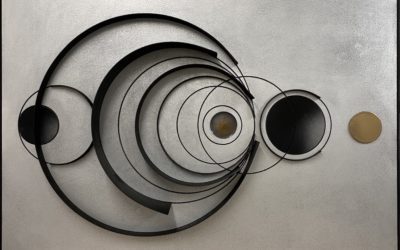 An excerpt from Trebuchet 9 : Materials. Conceptual Artist Gail Olding on the use of things.
Read more

Lungs of coral, hearts of stone

The Poetry & Potency of Presence