Friends as Enemies and Enemies as Friends…. (Wyndham Lewis)

He had good friends who outright disagreed with him at the deepest political level (Rebecca West); enemies he made out of people (like Filippo Tommaso Marinetti) who might have been natural allies, and he changed his mind on Hitler, turning against him as time progressed. We can however see Lewis as a type of iconoclast and generally a destructive force. It is destruction which inspired the appropriation of vortices for his art movement after all, and the creativity that came out of that destruction which gives Vorticism its dark appeal. Saying that however, Futurism was in part influential on Lewis, despite his efforts to distance himself from the movement and despite his criticisms of Marinetti:

Futurism, as preached by Marinetti, is largely Impressionism up-to-date. To this is added his Automobilism and Nietzsche stunt. With a lot of good sense and vitality at his disposal, he hammers away in the blatant mechanism of his Manifestos, at his idee fixe of Modernity.

The strong resistance of Lewis to Italian Futurism is in part due to his individualism and his ownership of the movement he had founded, wanting desperately to define it as distinct from what was happening in Europe. This approach, combined with his nationalism and the sheer size of the egos involved, prevented Vorticism from becoming a longer lasting international movement. An extract from Lewis’s account of a conversation with Marinetti shows just how resistant to Marinetti’s advances Lewis was:

But you Wops insist too much on the Machine. You’re always on about these driving-belts, you are always exploding about internal combustion. We’ve had machines here in England for donkeys’ years 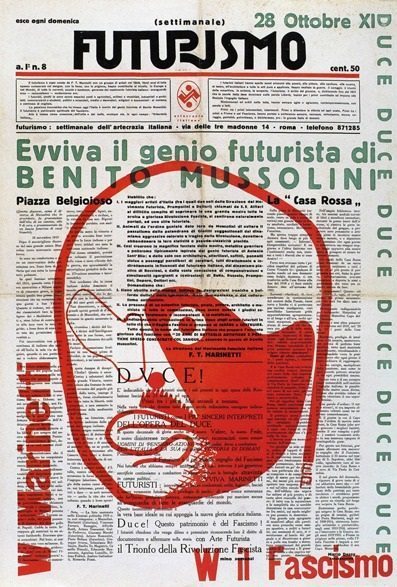 Futurism, taking as a starting point the aesthetic insights of Picasso and Braque, imbibed their movement with an enthusiasm for speed and a general celebration of technology and the future, in direct antagonism with tradition. Among modernist movements, the Futurists rejected anything old and looked towards a new Italy. This was partly because the weight of past culture in Italy was felt as particularly oppressive. In his Manifesto, Marinetti asserted:

We will free Italy from her innumerable museums which cover her like countless cemeteries.

This background and its concomitant anxiety of influence provided Marinetti with a striking contrast to assert and champion his movement against:

They were all Italian; to be Italian then was to inherit a culture dominated by the weight of the Tuscan and Roman Past and by a technologically backward economy.

With the rise of fascism in Italy, the historical background that once helped to highlight Futurism began to change, and the movement was pulled into open support of Mussolini. Marinetti and the Futurists believed that the energetic and aggressive approach of the new regime was in line with their own unsentimental ideology, famously referring to the hygiene of war, its cleansing quality to rid the world of superfluous people:

We will glorify war -the world’s only hygiene, militarism, patriotism, the destructive gesture of freedom-bringers, beautiful ideas worth dying for, and scorn for woman.

Mussolini though was not a total convert to Futurism. He, like Hitler, was not modern enough for modern art and, like Hitler, rejected it in favour of a more Roman, traditional aesthetic. Wyndham Lewis then, through sheer stubbornness and inflated ego (rather than sound judgement) avoided further association with Fascism.

The Futurism of the Left

Futurism in these two men’s movements was either a brash 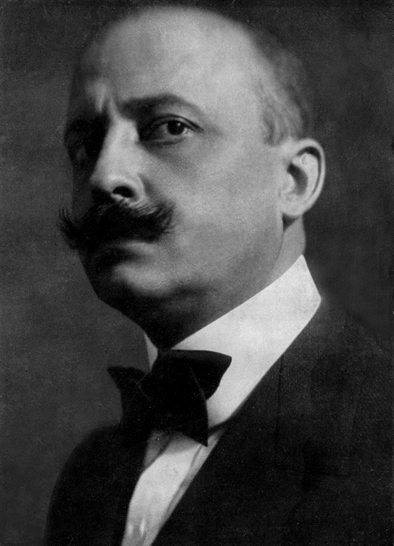 celebration of technology (Marinetti (pictured right)) or a hard-edged attitude to the masses and tradition (Lewis). Either group might have benefited from a friendly (or antagonistic) relationship with H.G. Wells, who was a little older and politically left leaning, such as the relationship the Surrealists enjoyed later with Freud and his writing on psychoanalysis. Wells was well equipped to enrich and broaden the horizons of each movement, subjecting technology and social change to criticism and celebration while maintaining a strong optimistic belief in socialism. He was well ahead of his time in exploring the ‘integral accident’ (Paul Virilio, 1999).

Works such as The Invisible Man, and The Island of Doctor Moreau, as well as his formal understanding of science might have offered greater detail to the artists’ enthusiasms. Since both Marinetti and Lewis were politically right wing, and since both regretted their initial enthusiasm for Fascism they may have also benefited from greater exposure to Wells’ politics.

There is circumstantial evidence to suggest that Marinetti was influenced by Wells in his work ‘The Untameables’ (as investigated by Maria Teresa Chialant¹). And for Lewis, Wells was a familiar figure in London’s literary circles (Ford Maddox Ford linked both men, as did Rebecca West). Lewis received a letter of praise from Wells regarding the novel Childermass, which Lewis then put on hold only to reply years later. The missed opportunity of a truly international Futurism with Wells providing the soul is an alternative future worth exploring.

Read Part One of this essay here.

Next Story:
Want Smart and Legal Mood-Enhancement (for Men)? Read On