With power comes reponsibility, as Wyndham Lewis (and Spiderman) knew well. Art is power, not voyeurism.

He was no socialist or liberal (postures fashionable with the literary intelligentsia to which he belonged), but provoked from the position of the right. Lewis was a committed individualist, was influenced by the ambiguous Nietzsche, flirted with fascism and regarded the masses and women (or rather feminization) with utter contempt, so in what sense can such a man be useful in furthering a left-leaning agenda, and why is his voice so important for the arts today?

The Need for agency and the Master

Recently the Marxist philosopher and equally individualistic public intellectual Slavoj Zizek declared that politics needs a ‘Thatcher of the left’ perhaps most notably in his April 2013 New Statesman piece:

What we need today is a Thatcher of the left: a leader who would repeat Thatcher’s gesture in the opposite direction, transforming the entire field of presuppositions shared by today’s political elite.

Zizek is not simply suggesting a toughened left winger should punish the right, he is imagining a figure, a new ‘master’¹ with all the attendant charisma and authority, who will change or punish all the mainstream ‘liberal’ positions of the modern world which lack authenticity and energy. A master whose presence would disrupt the equilibrium that has been established and who is a problem experienced by all sides. A figure like this would be an enemy to all those committed to the status-quo.

In art, we need a Wyndham Lewis of the left! An enemy who will punish or show up the lack of authenticity, phony generosity and general greed of the current art world. A service industry where serious or difficult ideas are not pushed on the masses. Rather, they (or we) are pandered to, patronized and distracted. The serious left has abandoned the field, has moved into obscurantism, practice-led research degrees, academic infighting and writing for each other in terms not easily accessed by anyone outside their clique. Meanwhile, the right swing between ruthless opportunism or a retreat into stale tradition and quaint tired practices, bemoaning the pretentiousness of an art world saturated with glib sentimentalism or total frivolity, but mount no attack whilst profits can be made.

There is trend in the arts that sees an outwardly money-and-fame orientated attitude (personified by the now-old YBAs, their media stunts and yuppie ethos) evolving into a more superficially concerned and traditionally liberal, sympathetic mien. Pundits like Grayson Perry in visual arts or David Baddiel in literary circles embody the trait. Both men have recently attempted to sympathize with the masses and deconstruct masculinity.

Baddiel goes for those at the top, exploring Thomas Carlyle’s Great Man theory – the view that history is formed by the impact of certain charismatic men – in his addition to the BBC’s Arts Night and in his book, The Death of Eli Gold. Therein he imagines the last great man of writing, a Phillip Roth type, on his deathbed surrounded by people he has wounded and inspired, his dirty laundry aired and life assessed.

Perry spreads his net a little wider over three programmes on Channel Four. ‘All Man’ explores masculinity, and in his first outing Perry visits men in the North East obsessed with fighting and mired in postindustrial strife. He laments at one point that men sometimes don’t know they are sad, and calls traditional masculinity a ‘callus’ on a human being. What’s the problem with this? Well it represents a simplification of masculinity and a misunderstanding of why a culture, in this case that of the North East, may lapse into a kind of cultural cringe.² It is lack of purpose and education which breeds this problem, not machismo (which is simply a side-effect). Lewis observed:

Men were only made into “men” with great difficulty even in primitive society: the male is not naturally “a man” any more than the woman. He has to be propped up into that position with some ingenuity, and is always likely to collapse. – Wyndham Lewis, ‘Call Yourself a Man!’ The Art of Being Ruled

It’s not that Lewis should be employed to celebrate what the fighters in ‘All Man’ are about. Rather that he would have discerned the problem faster and more accurately. His words above acknowledge the performative and collaborative essence of masculinity. Indeed, Lewis was less than impressed when watching Ezra Pound boxing with Ernest Hemingway, his and Hemingway’s differing interpretations of the event are explored in David Trotter’s review, ‘A most modern misanthrope’. Lewis is cool-headed in the face of these sorts of display.

Perry on the other hand is already celebrating the fighting culture, he sees their (the fighters and old miners) issue as one of not being in touch with their feelings, or of being too tough to talk about their past rather than as a result of their fascination with physical violence and neglect of personal agency. This is wholly false. The men in the film are all too ready to discuss their personal tragedies and squishy feelings, it is this which is essential to their he-man acting out. It rationalises their violence and is a part of their self-mythologizing. At one point a fighter with a criminal past talks candidly about the death of his brother to Perry and the camera crew he’s just met.

A man only goes and confesses his faults to the world when his self will not acknowledge or listen to them.’ – Wyndham Lewis, Tarr

Perry fails these men. He won’t tell the men in the program they are wrong or foolish because he doubts his own position as the one who knows or has authentic authority and so, despite the best possible intent, he offers them no agency. He simply smiles sympathetically and leaves them as he found them. The things he says and the work he makes as a result of meeting them further affirms the cycle they are all caught in, by celebrating their world and adding the wrongly assumed missing element: feelings which were ever present. The same fighter remarks, ‘I think all fighters have a story’. How right he is.

The intelligence suffers today automatically in consequence of the attack on all authority, advantage, or privilege. These things are not done away with, it is needless to say, but numerous scapegoats are made of the less politically powerful, to satisfy the egalitarian rage awakened – Wyndham Lewis, The Art of Being Ruled.

It is authority that’s in question rather than masculinity, and it is authority that’s lacking. While this may be linked to masculinity it is not a wholly male problem, there are female masters too. The old modernist expert type like Lewis had this authority and made declarations. One could agree or disagree with the modernist master. They did not go out of their way to pander to the masses, but at least the way was clear. Lewis was not afraid of being disliked, even hated, and was unconcerned with producing a positive legacy. 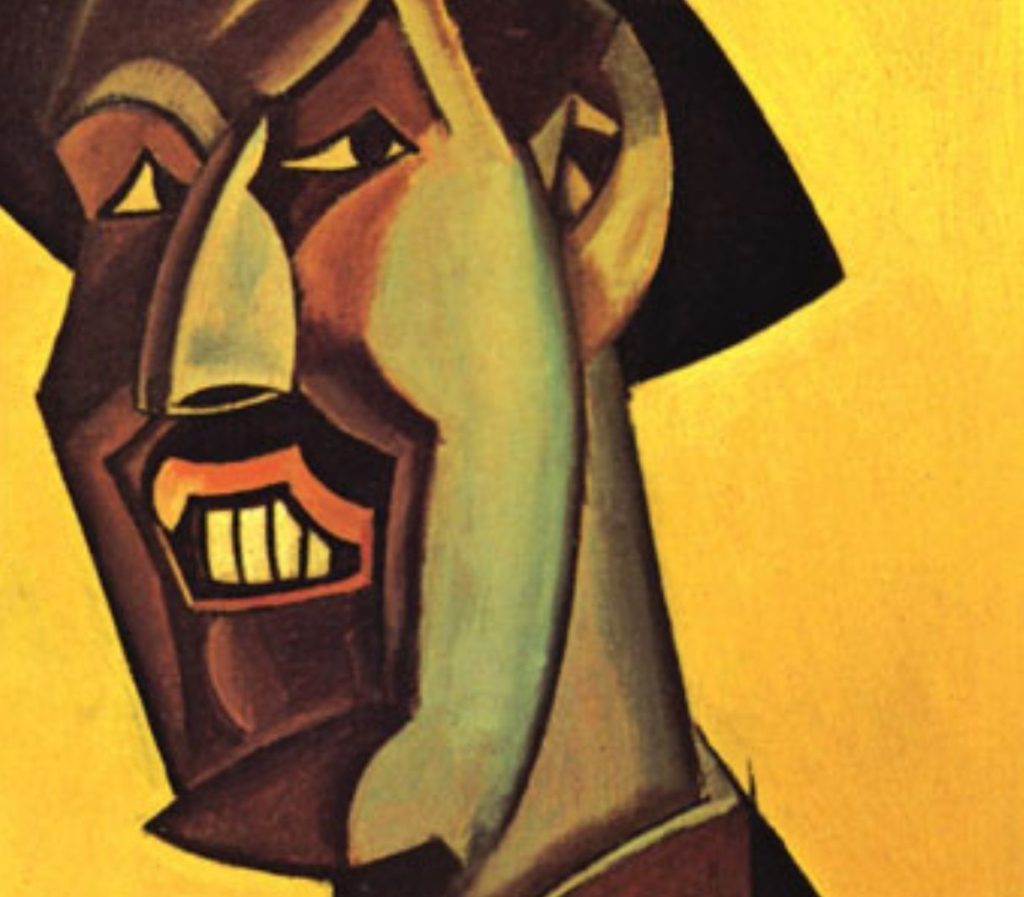 Instead of abdicating from the responsibility of being this agent (Perry) or picking over the carcass of the old modernist master (Baddiel), why can’t Baddiel and the so-called men he represents further their own project and identify with their own ideas with conviction? Instead, they mythologize the modernist master: his great intellect, his womanizing, his seriousness, while wagging a finger at the misogyny and hubris they feel they have avoided.

Baddiel, interviewing a sympathetic fellow writer, makes a point of mentioning he changes nappies and is fully involved in his family life. Were all the great men of the arts really so difficult? If so, why does this matter? It matters to Baddiel because (and it doesn’t take a psychoanalyst to see it) part of him really wants to be this master. The idea this might disrupt his family life is avoidance of the worst sort; you don’t need to become a womanizer or neglect your children just to act, what’s really at stake is being wrong and being called out on it.

Lewis knew this only too well with his book on Hitler (Hitler, 1931) and in subsequent works which retracted, so to speak, the sentiments of that book.³ Lewis is not consistent, but then, who is? It isn’t infallibility which is important for the master but the courage of their convictions and the ability to make clear decisions. This is the opening that we need in order to have agency. Both Baddiel and Perry have elements of this voice; the ‘callus’ of masculinity they both bemoan and characterize as the lack of empathy men have for themselves (Perry), or for others (Baddiel). This is not a trait of the master but of the past. Many people in the early 20th century were racist or misogynistic. Many men who achieved nothing also neglected their families. Instead of doing so to write a book or paint a picture they drank or whored or fought. The projection of this problematic behaviour onto greatness, seeing it as an inevitable side-effect (and as such, to be feared and avoided) is an excuse not to bother, and a fear of responsibility.

Right or wrong, Wyndham Lewis didn’t have this problem.

¹I am applying this term in the Lacanian sense (as in the ‘masters discourse’). Lacan’s concept identifies four discourses; Master, University, Hysteric and Analyst, and suggests that these relate dynamically to one another. The discourse of the master is based on Hegel’s ideas of the master/slave dialectic. It is however simple enough to say that the master makes decisions and is essential for agency.

²The term comes from cultural studies and social anthropology and is thought to have been first applied in Australia by the poet Henry Lawson. It describes an inferiority complex that leads to an anti-intellectual attitude and macho acting out due to factors such as economic decline or colonialism.

Next Story:
Magnetic Resonance Imaging for Ham – A Touch TOO Heston?