Philip K. Dick had two novels published in 1970: Our Friends From Frolix 8 and A Maze of Death.

They were leftovers from his phenomenal sixties output, rehashes of earlier ideas, and he didn’t care much for either of them.

His mood had grown dark following his separation from his fourth wife Nancy and their child Isolde. Drugs and drugged people filled the vacuum. He became fascinated by the fragile and untrustworthy inhabitants of the shabby drug subculture he now inhabited and wrote nothing for two years. He just used and observed the users, largely unaware that ‘out there’ (especially in Europe and the UK) his sixties work was finding a new audience.

In particular his novel The Three Stigmata of Palmer Eldritch which joined The Lord of the Rings, The Naked Lunch, Titus Groan and Stranger in a Strange Land on every decent counter-culture bookshelf. In Germany the novel was re-titled The LSD Astronauts. John Lennon mused in an interview about buying the film rights but someone else beat him to it. Unfortunately the film has not yet been made.

1972 saw the release of yet another left-over novel from the sixties, We Can Build You, 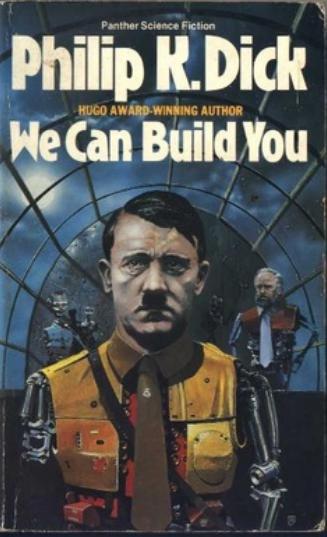 which plays out the recurring ‘how human can artificial intelligence become?’ theme as a small scale family drama, with wry humour supplied by a robotic simulation of Abraham Lincoln. Phil liked this one a little better but was still unable to write anything fresh.

He had other things on his mind – like cleaning up his act.

In order to make a break from the ultra-paranoid world of hardcore amphetamine users Phil moved to Canada for a brief period only to discover, on his return, that his Orange County home had been broken into. The damage was considerable: every door shattered and all windows broken. Plastic explosives had been used to open his filing cabinets and many important manuscripts, letters, notes and possessions were missing.

There were prints of combat boots in the rubble which confirmed Phil’s suspicion that the incident had been a quasi-military raid.

The damage to the psyche of a vulnerable amphetamine addict was even more considerable. Phil could never let the incident go. He scratched at it over the years like an irritating scab on the corpus, constantly revising his theories of who did it. Was it Neo Nazis annoyed by his left wing profile? Something related to the drug culture experiences? Government Agents sending him a message? (Phil was on public record as a person who loathed and despised the vindictive President Nixon and had also been the subject of an investigation by the FBI as far back as 1952).

Perhaps something in his futuristic writing had inadvertently predicted a new weapon or technique that the Pentagon was actually working on. This notion is actually the plot of the entertaining seventies movie 3 Days of the Condor starring Robert Redford.

No wonder Phil was confused.  All of his life he had been convinced that ‘they’ were out to get him and the raid was proof positive that he had been right along. Bruised and battered by the events of the last few years he did the only thing he could. He sat down at his typewriter and got back to work.

Flow My Tears the Policeman Said was first published in 1974. It transforms all of Phil’s hurt, anger and psychic disarray into a moving, elegiac tale of the black hole at the heart of celebrity culture.

The hero, Jason Taverner, is a selfish and self-obsessed television star with a celebrity girlfriend. He hosts the most popular TV chat show in history and is part of genetically enhanced elite known as the Sixes. He is also a first rank singer whose biggest hit is entitled ‘Nowhere, nothing, fucked up’.

While visiting an unhappy ex-girlfriend, she attacks him using a vicious organic machine. He falls into a life-threatening coma and when he recovers his senses a unique reverse amnesia has taken place. Although he remembers everything, the rest of the world has forgotten him completely. He has been erased from public record, his girlfriend and manager have no idea who he is and his credit cards no longer work.

Utilising only his good looks, enhanced charisma and a well-cut suit he must survive a brutal descent into the harsh underbelly of a Police State. The Policeman of the title, who pursues Taverner through the hell world of ‘ordinary people’, carries with him an overwhelming sense of grief and loss in stark contrast to Taverner’s confident pursuit of his own lost status. These two men are connected by their different relationships with the same woman: a user of a strange drug with dangerous side effects.

It’s a classic in a class of its own.

With this novel Phil had finally broken the new ground he had been longing for and, during the writing, he had met and married his fifth and final wife Tess. Their son Christopher was born in July 1973 and everything was set fair for a sustained period of creativity and domestic bliss.

On the second of March 1974 he opened the front door to collect a package. The dark haired girl who delivered it was wearing a golden necklace in the shape of a fish. Phil showed an interest in the curious design. ‘This was a sign used by the early Christians,’ she said, then left. Phil believed that, as the sun glinted off the gold pendant, its reflection caused the generation of a ‘pink beam’ that mesmerised him.

‘I had experienced an invasion of my mind by a transcendentally rational mind, as if I had been insane all my life and had suddenly become sane.’

At the age of 46 Phil fell deep into the arms of mystery, and stayed there for the rest of his life.