Moments after Daniel Morden has been introduced to the Crick Crack Club audience and begun his first story – one involving the god Apollo – a latecomer enters the auditorium.

A tall man, dressed all in black. Like a flash of lightning Morden is upon him: “Are you Apollo?” The latecomer plays along, declining to deny or confirm either way. “It pays to be respectful to strangers”, offers Morden, motioning towards the latecomer, “you never know when they might be a god in disguise.”

And so begins Morden’s deft and dextrous handling of the audience’s attention, always tuned in, always in real time. A symbiotic audience-performer relationship is of course live storytelling’s USP, with Morden himself more than fit for the task. Taking up the atmosphere in the room like so much fabric, he measures the weight of it and throws out a well-judged joke as a counterbalance – that this being the Soho Theatre, he imagines most of his audience will be here thinking he, Morden, is a comedian, in which case they are bound to be disappointed. Whilst a comedian he is not, a storyteller he most definitely is.

Epic themes abound in his tales of The Empty Hand, rising up from mythic story structures which are universally and eternally relatable: love, fear, death, rebirth, trial by the gods and of course by the original man in black (no, not Johnny Cash), the Devil himself. 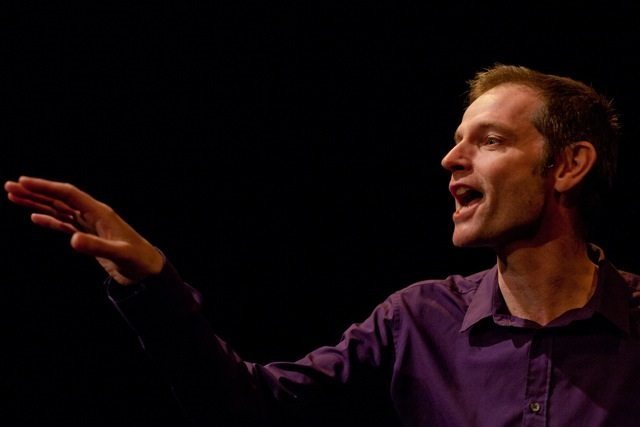 His characters may come from the world of myth and folklore, but they are human and flawed just like us. A young king, having taken a wife, is looking forward to spending the rest of his life as a happily married man when he is visited on his wedding night by Hermes, the winged messenger, with the news that this hour shall be the king’s last. The king’s desperate response is to hunt his castle high and low for someone who might love him enough to take his place, stopping at nothing and no-one: his old and devoted nanny, his parents, his gardener, even a young and innocent child.

The imperfections of even Saint Peter are similarly brought to life, as Morden spins a yarn of how the guardian of the gates of heaven is browbeaten by his cantankerous, rotten-to-the-core mother to pull some strings and get her out of hell in a bid to sneak her (wholly undeserved and on a straw so implausible Donald Trump would not balk to clutch at it) through the pearly gates instead.

The Empty Hand continues with the story of Moira, a headstrong peasant woman’s daughter who descends into the depths of hell for eight long years in order to set a loved one free from the devil’s chains. Dark matter, yet Morden knows when to ease off the heavy dramatics and bring in a light touch, peppering each tale with comedic moments. “Are you alright?” he has one character ask the beleaguered heroine on her emergence from the underworld, “You look like you’ve been to hell and back.”

One of Morden’s skills as a storyteller is that he knows how to handle live performance, deftly working the audience like a baker knows just how to handle dough by working with it, not against. He weaves the story before our eyes and ears; a gesture here, a moment of silence there. His physicality is subtle yet arresting, hooking our attention with gestures and movements that relay everything we need to know. Overblown play-acting is not necessary here; a storyteller such as Morden says it all with his richly conceived and expertly delivered text.

About Crystal Bennett 8 Articles
Crystal Bennett was a ship yard worker in northern Italy, a royal butler in Casablanca and a movie star in the Republic of Georgia before joining the Trebuchet team as art editor. "Truth is stranger than fiction." - Mark Twain