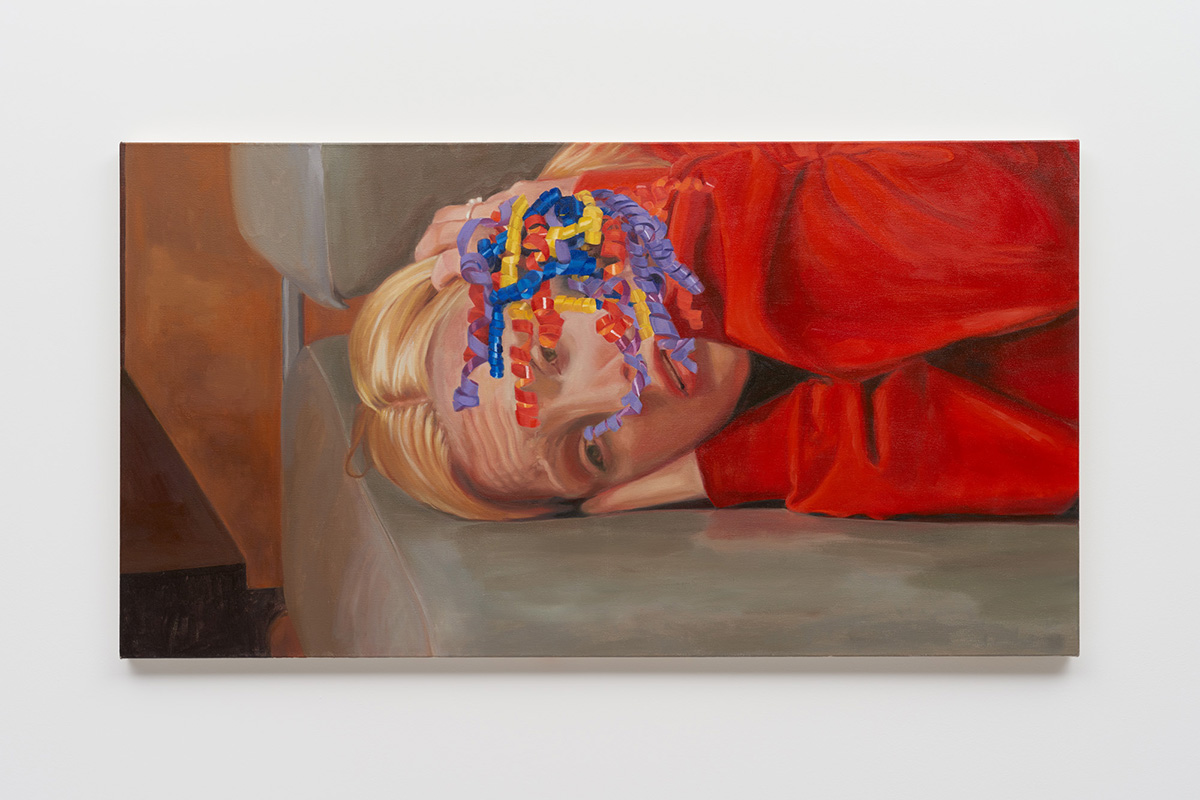 For her first solo exhibition in London, Shannon Cartier Lucy presents a new series of seductive and unsettling paintings of women set amidst the domesticity, chaos and excess of a party.

Here, the artist discusses her inspirations, disrupting the expectations of the gaze and why she likes the feeling of uncertainty.

Your work feels very narrative-driven. Do you see yourself as a story-teller?

Rather than point to a story, I want to invoke a feeling because feelings inform thoughts which inform feelings and so on, which creates an experience. An abstract painting, because it isn’t pointing necessarily to figures and objects which are recognisable, isn’t really expected to have a narrative. I think with figurative painting, there’s an expectation for familiar figures and objects to make sense and be cohesive. And with surrealism or fantasy painting, we can still logically point to that and say, “That’s fantasy, it’s not realistic.” I guess my paintings live somewhere in between. We can look at them and say, “I see an image rendered realistically, but I don’t really know what’s going on here.” The image is intriguing and sexy and scary or odd, depending on who is seeing it. Painting somehow elevates the image, whatever it is, because the craft and its physicality can stop you, draw you in and convince you of its presence.

Tell us about Cake on the Floor. What interests you in the dramas and settings of a “party”?

Actually, it was after making a few paintings that I thought, “How do all of these relate to each other?” One of those paintings was a piece of cake on the floor, so I liked the idea of simply using Cake on the Floor as the show title.  It’s interesting and fun to find that a title can automatically guide our minds in a direction, a way of seeing the rest of the paintings. I always get nervous when it’s time to title a show because I am so afraid of limiting it somehow. I felt like this title made the most sense because it didn’t make much sense, but it could also mysteriously tie the rest of the paintings together.

What symbolism does the ribbon hold for you in these works?

From a very young age, I would watch my mum take scissors and curl the ribbon into those tight springy curls, so that particular image carries a lot of nostalgia for me, it’s comforting and familiar.

What generally inspires your compositions? Do you work with models or source imagery?

I use both images and models, depending on the scenario. For this show, I had a model wear a child’s multi-coloured raincoat that I had bought on Etsy. I also made my boyfriend begrudgingly pose for me with ribbon on his face and hanging from our light fixture. I source imagery from lots of different places.

The clothing, interiors and colour palette often seems to suggest a time period that’s neither contemporary nor nostalgic – it feels almost like you’re creating a kind of dream space.

That is interesting. I guess it is my dream space because it’s what I am conjuring up. I think there is a very classic style element to the interiors and clothing in my paintings that’s timeless in a way.

Your protagonists are generally captured at awkward angles, bending over or their backs turned, and we rarely see their faces. Is your intention to place the viewer in the position of a voyeur, and if so what do you find interesting about that kind of perspective?

Faces tell so much that they can be distracting. Sometimes, it’s a figure in a space that I am pointing to and not the way the figure feels in that scenario. We, as viewers, get to feel something. I have painted faces, though, and usually it’s because I want that face, that expression, to be at the centre of what the painting is about.

I wouldn’t necessarily consider myself a voyeur and I’m not sure that I have the intention of placing the viewer in that role, although that is not really up to me.  I simply want to create pictures that make sense to me in a very visceral way and I want other people to see what I think is beautiful. Very awkward, dark or even painful experiences are quite poignant and have been a huge part of my life, and I assume I am not alone in this.

Many of these latest paintings depict food and/or the act of consuming – half-eaten pieces of cake, thick icing and greasy lips. How does the idea of excess fit into the wider themes that you’re exploring in these works?

I am usually attracted to images with a sensual quality to them. I think food in my painting is generally used as a prop to create a mood, a scene that is relatable, that we can recognise. We all relate a piece of cake to a particular feeling. It references something specific. For me, it’s a reward of some sort. So, why is it on the floor? I just thought that’s a funny and interesting scenario that could have so much meaning.

Despite the domesticity or everydayness of the scenes you paint, there’s often an underlying strangeness that can feel uncomfortable or even threatening. How does this relate to your thinking around femininity and womanhood?

I can’t necessarily speak for anyone else’s experience of womanhood, but from my own point of view, I just happen to be a woman and I guess I could say I embrace my femininity. The figures in my paintings are closest to what I know best, so I generally paint female figures. When I am coming up with an image to paint, I also want to experience seeing the image as somewhat strange and not really know what’s going on because I find that intriguing. I don’t, as the creator, have the secret backstory. I like the feeling of mystery, of not knowing, of subtlety because, to me, that is truth, but I think it may make a lot of people feel uncomfortable. People like knowing what everything is and where everything is supposed to be, and how figures on a canvas are supposed to be arranged, but to me, that’s delusional and boring.

What are you working on currently?

I am working on my next show which will be in New York City in the fall. Each painting involves a table, that is all I can say.  The show will coincide with the release of my first book of all of my paintings to date with Hassla Books. I just hope it all comes together. I am so excited!