Imagine another world in which extra-terrestrials roam or slide with their cyborg affiliates. Imagine their futuristic habitats, their disasters and their strange ways of breathing, approaching, greeting, eating; more strange for being only slightly removed from our own familiar ways. You are now inhabiting Crashing, Lee Bul’s new show at The Hayward.

It is all so delicately done.

A small fan blows in an ever repeated arc. The air slightly billows light cotton round the foot of a thing. (Is the thing seated in repose?) It makes the thing breathe.

There are individual polythene bags filled with liquid in which sequinned and bejewelled dead fish lie motionless. I am sorry to say this exhibit had been removed shortly after opening. (The image in the catalogue is beguiling.) The rotten fish were prone to self-combustion.

A large series of the work on show is Thaw. One piece in this series has a block of ice (Is it ice in this twin earth?) melting and as it does the stream is made up of black jewellery that glitters like polished spinel. Certainly it is the frozen head of former dictator, Takaki Masao. As his head thaws the black, beautiful, evil stream spills into a pool of glistening oil.

There are sequins and other delights that somehow take on a sinister tone in these uncanny pieces.

In his catalogue essay, “Horror and Hope”, Michaël Amy writes,

Lee Bul’s rich, complex and often visually stunning models for utopian architecture expose the workings of the mind. Though steeped in the history of art – with a focus on avant-garde practice and the history of thought – her most successful works are never overbearing or dry. Lee Bul’s darwings and sculpture offer multiple points of entry and rewards that satisfy both mind and eye, for those who are willing to join her in making the leap into the unknown. This may be her ultimate triumph: that the deeper one digs, the richer the work becomes. (Amy, 2018)

It is interesting to note that Lee Bul, in interview, declares an interest in theatre – she was disappointed with art school for the lack of interaction with other artists concerning ideas.

No wonder, then, she found an interest in architecture.

Many of the pieces are concerned with avant garde architecture, and she shows a developed knowledge of its practitioners, for instance, Archigram. Her floating buildings would seem more at home in the architectural debate than in contemporary art.

It is with the idea of habitation that she crashes the boundaries of the ‘lived in’ built environment and the contemplated work of art.

One work, “Live Forever III” appears as a three-dimensional model of the duck/rabbit ambiguouis figure. That figure was introduc ed into gestalt psychology by American psychologist, Joseph Jastrow.

It was tasken up and made use of in Wittgensteain’s Philosophical Investigations. (Wittgenstein, 1973). The single figure can be seen as either a duck or a rabbit, but (arguably) not both at the same time. Such examples are used to show that the mind contributes to interpretive seeing.

Lee Bul’s work, especially the series concerned with cyborgs, is highly ambiguous. Are such ‘creatures’ humans or machines/More difficult to answer is the question as to whether there could be sentient machine. Try seeing “Live Forever III” as an anime duck or as an anime rabbit.

In fact it is a pod into which one person sits whilst listening to and singing along to Karaoke. 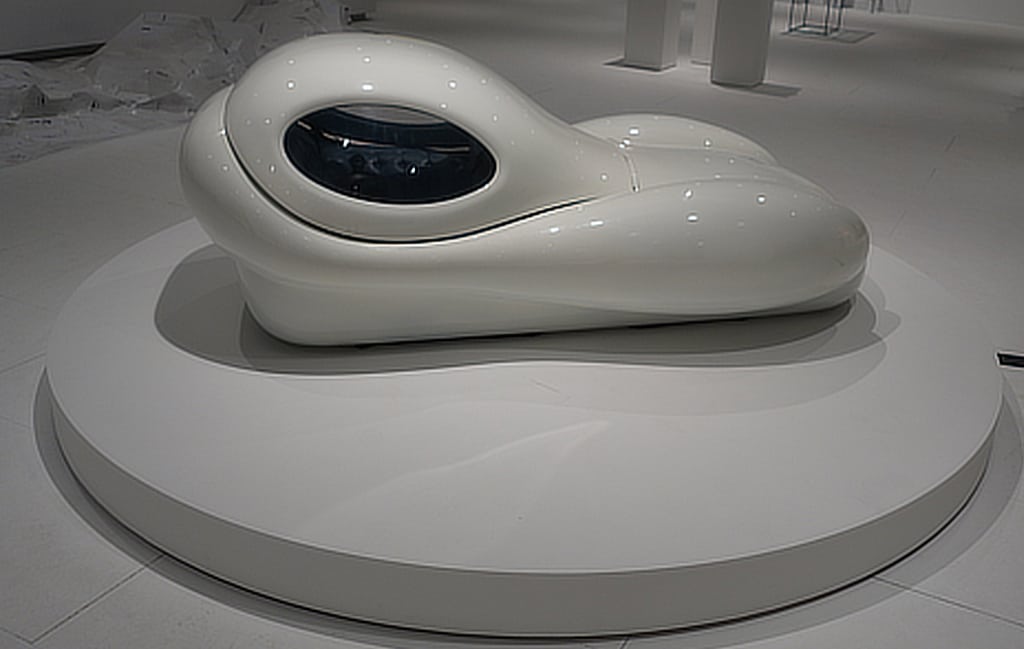