An Explosion in the Hayward

We are creatures. We flourish as bits of nature. However, it has been claimed that we survive our natural life to live in the spirit world, or something like it.

There is something uncanny about the lives of imagined creatures from beyond our world. It is as if an extra terrestrial is somehow supernatural.

Thus Lee Bul’s show at The Hayward Gallery disquiets the specvtator with its monsters and cyborgs. The former are familiar enough from our childhood anxieties.

Cyborgs, however, are fairly new to the scene. Million Dollar Man, we might think, is an early example. It is the thought that we are now beginning to develop parts of brains that might restore sight to thre blind; artificuial limbs and so on.

Prosthetic devices in general extend our capacities as human beings in ways that are not only remedial but are extensions of the self into the environment. The devices are not themselves creatures, but become the means by which creatures can insert themselves into mthe world.

No wonder, then, that military research is the mother of new prosthetic invention – think of heat sensitive monitors that enable soldiers to ‘see’ the enemy moving during pitch black nights in the theatre of war.

Lee Bul’s works invent and imagine part monsters, cyborgs and sentient machines. Her wonderful pieces are at once lavish, bejewelled and exotic; whilst also being creepy.

The work is said to have reekede to high heaven, wherever that might be. Sadly, shortly after installation at The Hayward Gallery, the fish sponaneously combusted! I wonder what happens to your soul, if your remains explode.

The gallery hopes to reopen on Friday.

London’s Hayward Gallery has been forced to close on the opening day of a major solo show dedicated to the South Korean artist Lee Bul. One of her works caught fire yesterday, forcing the private view of the exhibition “Lee Bul: Crashing,” to be called off.

“During an incident yesterday, an artwork caught fire in a contained space within the Hayward Gallery which required attendance from the fire brigade,” a spokesperson for the gallery confirmed to artnet News.

The artist and the museum decided together to remove the artist’s work Majestic Splendor (1991–97) from the exhibition for safety purposes ahead of the opening, but a small fire broke out during the de-installation. While the press preview yesterday morning went ahead, the evening opening was canceled at the last minute.

This isn’t the first time the work, which comprises a fish decked out in sequins, has caused trouble. The smell of Majestic Splendor made visitors to Bul’s 1997 show at the Museum of Modern Art so nauseous that it had to be removed. To avoid the same problem, the fish have since been placed in a sealed plastic bag with the chemical potassium permanganate. But the presence of the chemical increased the chances that other already flammable materials would catch fire.

“Superficial damage was sustained in a confined section of Gallery 1,” the spokesperson said, explaining that the gallery will remain closed today and tomorrow to deal with “remedial cosmetic work.” Staff anticipate reopening on Friday, June 1, to inaugurate the show, which will run through Hayward’s 50th anniversary in July and close August 19.

One security contractor was assessed for the effects of smoke inhalation as a precaution in the wake of the blaze, the spokesperson said. The Hayward reopened its space in London’s Southbank Centre at the end of January after a two-year closure for refurbishment. For its latest show, Lee has taken over the gallery’s expansive space with more than 100 works spanning the late ‘80s to the present. The show includes installation, painting, and performance, transforming the space into a futuristic landscape replete with alien bodies, cyborgs and Kusama-like mirrored environments.

The artist’s work recalls everything from science fiction stories to Korea’s own quickfire urban development and presents an environment teetering on the edge dystopia. Indeed, the fire broke out among a number of depicted disaster experiences that include a monumental foil Zeppelin, Willing To Be Vulnerable – Metalized Balloon (2015–16), that references the 1937 Hindenburg disaster, and a new sculptural work, Scale of Tongue (2017–18), which references the sinking of the Sewol Ferry in 2014, an event that left 304 people dead. Lee received an honorable mention at the 48th Venice Biennale in 1999 for her contributions to the Korean Pavilion and Harald Szeemann’s international exhibition. She later received the Noon Award for established artists making experimental work at the 10th Gwangju Biennale in 2014.

“Lee Bul: Crashing” is on at London’s Hayward Gallery from May 30 through August 19.

Want to stay ahead of the art world? Subscribe to our newsletter to get the breaking news, eye-opening interviews, and incisive critical takes that drive the conversation forward. The wildfires currently raging out of control in Los Angeles and Ventura County have claimed 150 homes and triggered the evacuation of more than 27,000 people. Meanwhile, cultural institutions are dealing with fallout from the blazes, and carefully eyeing the effects. Both the Getty Center and Villaand the Skirball Cultural Center have announced that they will remain closed today because of smoke conditions.

“Today we chose to close our administrative offices for the safety of our staff as well,” Skirball spokesperson Mia Cariño told artnet News via email. “Essential security and engineering staff are on site, in close touch with LAFD and LAPD, monitoring the situation,” she added.

Further north, the Santa Barbara Museum of Art said frequent power outages due to the fire prompted its closure. Later in the morning, the Hammer Museum also announced it was closed for the day in order to protect artworks from smoke conditions.

Last night, a Getty spokesperson told artnet News last night that both the Getty Center and Villa were not at risk as the fires were nowhere near them. That changed, however, when a third fire—now being called the Skirball Fire—broke out early this morning just northeast of the Getty Center and east of the San Diego Freeway. The institution was monitoring the situation and said will issue updates as they are available.

By yesterday, before the Skirball Fire had broken out, the museum was already closed to protect the collections against smoke. “All Getty buildings have sophisticated filtration systems, but their effectiveness can be compromised by heavy traffic going in and out of buildings. We will continue to close the Getty Center and Getty Villa to visitors [December 6] due to continued smoke.” (The Villa was closed to the public yesterday as per its usual schedule.)

According to an update from Los Angeles Fire Department Deputy Chief John Todd, as of 4:20 p.m. EST, the Skirball Fire in the Bel-Air Area was spread over 150 acres and the 405 freeway has been closed at Sepulveda Pass (near the Getty Museum). The fire has led to power outages on the Westside of LA and an unknown number of structures have been damaged and lost. artnet News confirmed that at least four homes have been destroyed so far. 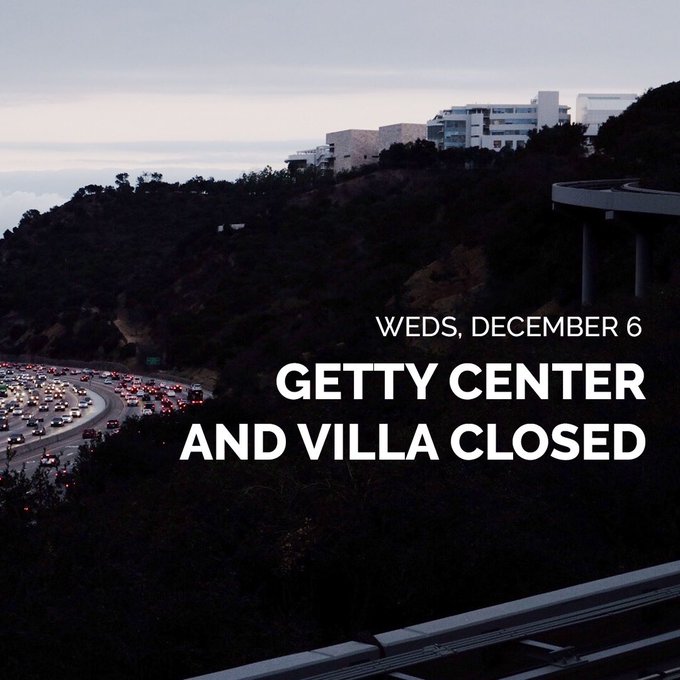 Due to continuing smoke from fires in the region, the Getty Center and Getty Villa will remain closed to visitors tomorrow, Wednesday, Dec. 6, 2017.

Social media posts this morning documented the worsening conditions, including one describing a six-acre hillside fire off the 405 freeway.

Firefighters are battling a raging 475-acre brush fire that shut down the 405 Freeway near the world-famous Getty Center for part of Tuesday afternoon, prompting mandatory evacuations for residents… 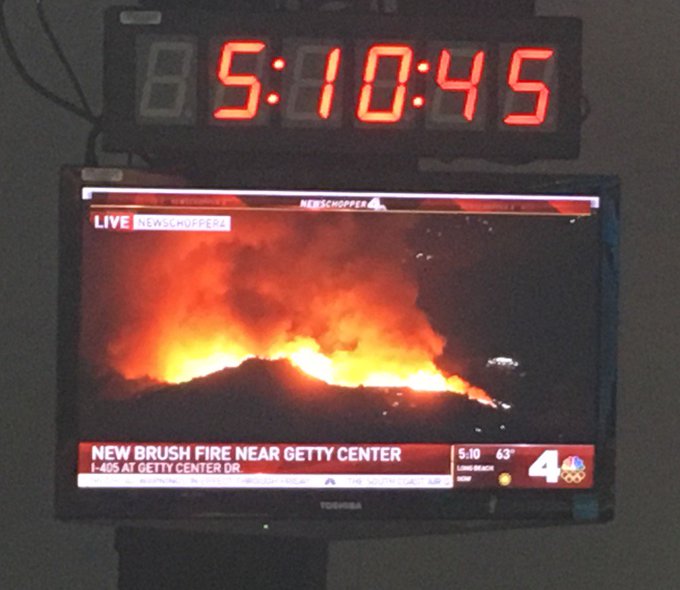 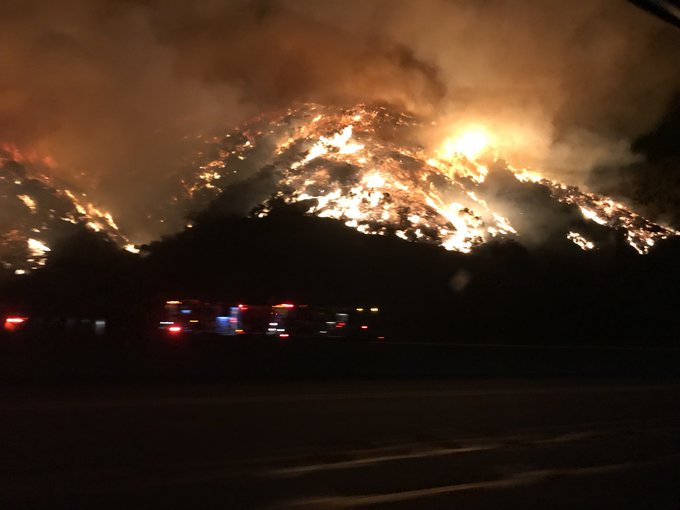 Driving to LAX just as they’re closing the 405 for this roaring hillside fire near the Getty exit. Car windows are hot. Stay safe, LA.

Another tweet from an NBCLA reporter reads: “5th fast-moving fire uphill and threatening structures near The Getty Center. 405 northbound shutdown.”

There are now reportedly five discrete fires burning in southern California. An LA County fire that started near Kagel Canyon is being called the Creek Fire and covers 11,000 acres. The Ventura County blaze, started near St. Thomas Aquinas college and known as the Thomas Fire, covers 50,000 acres. Firefighters are working around the clock to both contain the blazes and evacuate people.

Want to stay ahead of the art world? Subscribe to our newsletter to get the breaking news, eye-opening interviews, and incisive critical takes that drive the conversation forward.

Next Story:
Equivalence & the Loss of the Engaged Human