Equivalence & the Loss of the Engaged Human

Does postmodernity gradually traumatise the population, and is this happening in such a way that our senses cant quite grasp it?

Postmodernity as a condition of being for those of us who inhabit the developed world in the later 20th and early 21st century can be difficult to fully grasp. Given we are effectively embedded in it and subject to it, it can be difficult to get a clear perspective on how it’s different from living in other epochs.

Also since many of us have never lived in any other epoch our normality is so saturated with certain modes of behaviour and habits that we simply aren’t shocked by a loss that we effectively experience as ordinary. Taking the approximations of previous articles (Postmodernism ‘Phoenix’ In Commas) as to when postmodernism begins; 1972, when the modernist building project Pruitt-Igoe was blown up, (date proposed by Charles Jencks the architectural historian and cultural theorist) we can be clear that those born post 1972 are children of postmodernity, and have experienced the full effect of the period. One of the profoundly negative results of postmodernity is the ‘flattening of affect.’

The notion of the flattening of affect is sometimes applied in medical circles to indicate the lack or near absence of an emotional response to stimulus; it is observed in trauma sufferers, in severe depression and in schizophrenia. An extreme example would be the victims of the holocaust who, at the end of their imprisonment and torture in concentration camps and despite surviving physically, were near catatonic and unresponsive to their liberators (of course this was not true of all survivors) Sometimes referred to as ‘muselmann’ these tragic figures shocked and haunted the soldiers who found them. 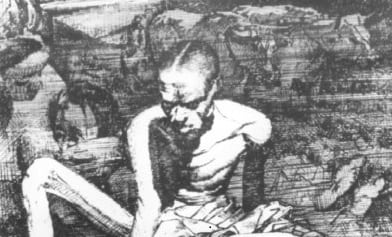 * Flattening of affect is a scientific term describing a person’s detachment and lack of emotional reactivity.
* Used in the postmodern literature to describe technology’s dehumanizing impact.
* A key example is the movie 2001: A Space Odyssey where the main characters lose their humanity whereas the computer HAL gains “his”.
www.onpostmodernism.com
________________________________________

Those of us born post 1972 are clearly not, on mass, suffering from the severity of the ‘flatting of affect’ personified by the tragic ‘muselmann’ but it is proposed by none other than the eminent Fredric Jameson, American literary critic and Marxist political theorist, that we are subject to dramatic shift under postmodernism where our emotional responses are simulated and that Dr. Jeanne Willette observes Jameson experiences as a directly felt loss, 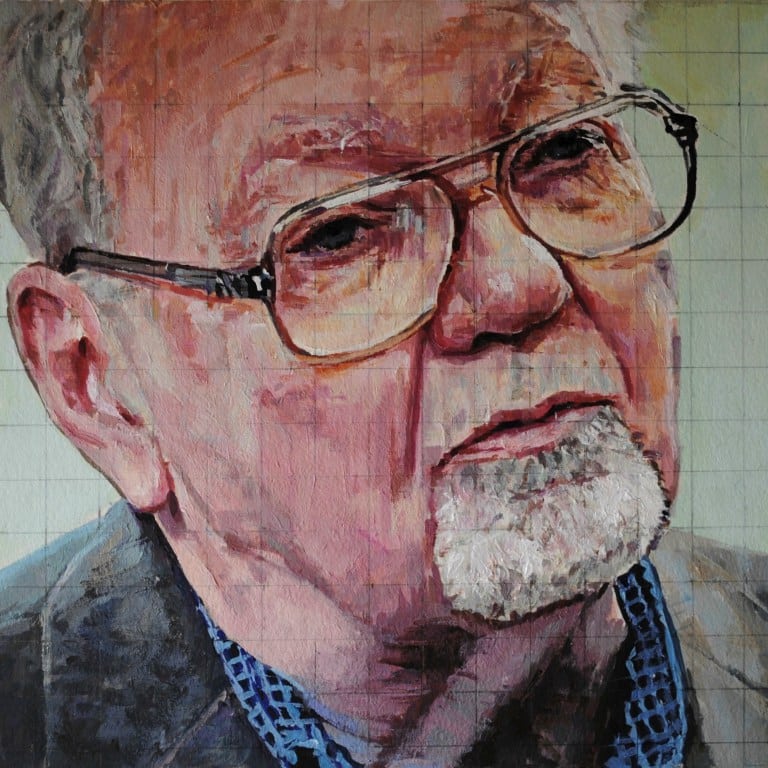 “Jameson wrote, ‘…aesthetic production today has become integrated into commodity production generally…’ The lack of order and hierarchy during “Late Capitalism” extended to a “flattening” effect in which the border between the real and the simulacra was erased because once capitalism turns everything into a commodity, everything is equalized. The “flattening effect” is extended to emotions which can no longer be real and can only be simulated. Within the realm of capitalism, images make money or not and it makes no difference to the system whether the “art” commodity comes from Rachmoninoff or the Rolling Stones. The sub-text of Jameson’s work is one of regret at the passing of Modernism and a veiled condemnation of the Postmodern. The essay is elegiac, shot through with a sense of loss and longing for a legendary past,” Dr. Jeanne S. M. Willette, 2012

The hollowing out of meaning which occurs in the stages of the simulacrum is discussed previously in ‘Postmodernism: Living a Lie Dreaming the Truth’ and I won’t repeat that here; (also noted is the difference between effect and affect) an alternative useful contrast in understanding difference in the forces of modernism and postmodernism comes from Jameson himself,

“Jameson illustrates his point of depthlessness by two thematically related works: Van Gogh’s “A Pair of Shoes” which represents high modernism and Andy Warhol’s “Diamond Dust Shoes” which are obviously postmodern. Jameson quotes Heidegger’s interpretation of Van Gogh’s works as one which invites the reconstruction of a whole peasant world and dire life and offers another possible interpretation of his own which follows the basic notion of addressing something which is beyond the actual shoes in the painting. In contrast, “Diamond dust shoes” do not “speak to us”, as Jameson puts it. Different associations are possible when looking at a Warhol’s work, but they are not compelled by it nor are they necessarily required by it. Nothing in the postmodern work allows a lead into a hermeneutic step. Warhol’s work is therefore an example of postmodern depthlessness because we cannot find anything which stands behind the actual image,” The Cultural Reader, 2011

Jameson (Born, 14 Apr 1934, age 84) was able to get all the way to 38 before postmodernity got into full swing (in 1972) his formative years and even a good deal of maturity developing up to that point. It’s difficult to fully take on Jameson’s stance since the ‘legendary past’ only exists for us today in the form of historical media, and the accounts of people like Jameson who were there. We can’t step into a modernism to see if it makes us feel differently and we can’t be sure that our interpretations even of recent history are not coloured by a nostalgia or bias,

“there no longer does seem to be any organic relationship between the American history we learn from schoolbooks and the lived experience of the current, multinational, high-rise, stagflated city of the newspapers and of our own everyday life,” Frederic Jameson 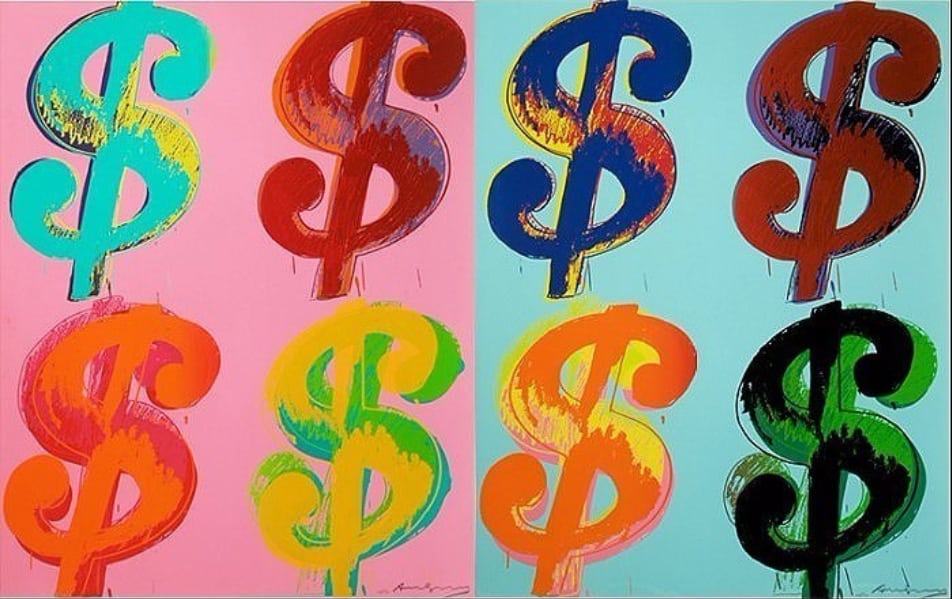 We can see that the notion of equivalence and the commodification of practically every aspect of modern life, is a moral as well as economic problem. The ‘organic’ relationship that Jameson refers to can’t be felt by us like moving between atmospheres but can be understood as a lack of guarantee from above, there is no hegemony accept the capitalist economy and as such everything is subject to that logic.

Not being able to feel the difference is an obvious thing to say, the point of labouring this is to highlight how people are not good at noticing problems that don’t come in the classic form of a threat, the kind of threat that we recognise animally: violence, atmospheric severity, starvation, and so on.

The trauma of the ‘muselmann’ was induced quickly by just such animal forces, awful levels of violence and subjugation; quickly in that the effects were felt by the individuals directly within their life time and had obvious outcomes, each of those victims would have at some point before their mental destruction have resisted and been acutely aware of the danger, that in effect combined with not being able to do anything about it must have been a major factor in their psychic fragmentation. Is something like this happening to us slowly and in some other more abstract form?

“The end of the bourgeois ego, or monad, no doubt brings with it the end of the psychopathologies of that ego–what I have been calling the waning of affect. But it means the end of much more–the end, for example, of style, in the sense of the unique and the personal, the end of the distinctive individual brush stroke (as symbolized by the emergent primacy of mechanical reproduction). As for expression and feelings or emotions, the liberation, in contemporary society, from the older anomie of the centered subject may also mean not merely a liberation from anxiety but a liberation from every other kind of feeling as well, since there is no longer a self present to do the feeling,” Jameson 1993

The problem of ‘equivalence’ and the result being a flattening of emotional response is a horrifically circular, self-propelling/fulfilling issue which means almost nothing to most people in terms of threat. The animal threats sadly is where most of our radars are busy despite our lives in western culture being almost entirely defined by forces that require higher critical awareness to grasp.

Michael Eden is the Arts Editor for Trebuchet Magazine, an artist and researcher working in London and the south east, his artistic practice is concentrated on painting and he divides his time between this and lecturing in art history and contextual studies.

Previous Story:
An Explosion in the Hayward