Add to that the already verbose lexicon of wine snobbery and things could well become painfully poetic. Brace yourselves for some liberal label loquaciousness as global warming extends the winebelt northwards into the granite latitudes of the Orkneys.

Many factors go into making good wine: grape variety, harvesting practices, a vineyard’s slope and aspect, soil, climate and so on–that unique combination that adds up to a wine’s terroir. Year-to-year weather also matters greatly. In much of France and Switzerland, the best years are traditionally those with abundant spring rains followed by an exceptionally hot summer and late-season drought. This drives vines to put forth robust, fast-maturing fruit, and brings an early harvest. Now, a study out this week in the journal Nature Climate Change shows that warming climate has largely removed the drought factor from the centuries-old early-harvest equation. It is only the latest symptom that global warming is affecting biological systems and agriculture.

Temperature is the main driver of grape-harvest timing, and in the last 30 years, progressive warming has pushed harvest dates dramatically forward across the globe, from California to Australia, South America and Europe. In France, where records go back centuries, since 1980 harvest dates have advanced two weeks over the 400-year mean. These earlier harvests have meant some very good years. But existing studies suggest that regions here and elsewhere will eventually become too hot for traditionally grown grapes. Vineyards may then have to switch to hotter-climate varieties, change long-established methods, move or go out of business. The earth is shifting, and terroirs with it.

In the new study, scientists analyzed 20th and 21st-century weather data, premodern reconstructions of temperature, precipitation and soil moisture, and vineyard records and going back to 1600. They showed that in the relatively cool winemaking areas of France and Switzerland, early harvests have always required both above-average air temperatures and late-season drought. The reason, they say: in the past, droughts helped heighten temperature just enough to pass the early-harvest threshold. Basic physics is at work: normally, daily evaporation of moisture from soil cools earth’s surface. If drought makes soils dryer, there will be less evaporation–and thus the surface will get hotter. The authors say that up to the 1980s, the climate was such that without the extra kick of heat added by droughts, vineyards could not get quite hot enough for an early harvest. That has now changed; the study found that since then, overall warming alone has pushed summer temperatures over the threshold without the aid of drought. On the whole, France warmed about 1.5 degrees Celsius (2.7 Fahrenheit) during the 20th century, and the upward climb has continued. 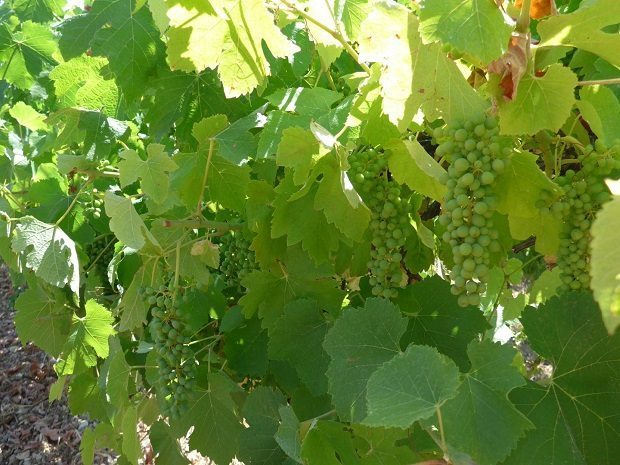 “Now, it’s become so warm thanks to climate change, grape growers don’t need drought to get these very warm temperatures,” said lead author Benjamin Cook, a climate scientist at Columbia University’s Lamont-Doherty Earth Observatory and NASA’s Goddard Institute for Space Studies. “After 1980, the drought signal effectively disappears. That means there’s been a fundamental shift in the large-scale climate under which other, local factors operate.”

The regions affected include familiar names: among them, Alsace, Champagne, Burgundy, Languedoc. These areas grow Pinot Noirs, Chardonnays and other fairly cool-weather varieties that thrive within specific climate niches, and turn out exceptionally after an early harvest. Study coauthor Elizabeth Wolkovich, an ecologist at Harvard University, said that the switch has not hurt the wine industry yet. “So far, a good year is a hot year,” she said. However, she pointed out that the earliest French harvest ever recorded–2003, when a deadly heat wave hit Europe and grapes were picked a full month ahead of the once-usual time — did not produce particularly exceptional wines. “That may be a good indicator of where we’re headed,” she said. “If we keep pushing the heat up, vineyards can’t maintain that forever.”

Across the world, scientists have found that each degree Centigrade (1.8 degrees Fahrenheit) of warming pushes grape harvests forward roughly six or seven days. With this effect projected to continue, a 2011 study by Lamont-Doherty climate scientist Yves Tourre suggests that a combination of natural climate variability and human-induced warming could force finicky Pinot Noir grapes completely out of many parts of Burgundy. Other reports say Bordeaux could lose its Cabernets and Merlots. A widely cited though controversial 2013 study projects that by 2050, some two-thirds of today’s wine regions may no longer have climates suitable for the grapes they now grow. But other regions might beckon. Grapes no longer viable in California’s Napa Valley may find suitable homes in Washington or British Columbia. Southern England may become the new Champagne; the hills of central China the new Chile. Southern Australia’s big wineries may have to land further south, in Tasmania. “If people are willing to drink Italian varieties grown in France and Pinot Noir from Germany, maybe we can adapt,” said Wolkovich.

However, this begs the question of whether vineyards, or for that matter anything can just be picked up and moved. The earth is increasingly crowded with agriculture and infrastructure, and land may or may not be available for wine grapes. If it is, the soils, slopes and other exact conditions of old vineyards would be difficult or impossible duplicate. And, grape harvests are only one of many biological cycles already being affected by warming climate, with uncertain results. Many insects, plants, and marine creatures are rapidly shifting their ranges poleward. No one yet knows whether many species or entire ecosystems can survive such rapid changes, and the same almost certainly goes for wine grapes.

Liz Thach, a professor of management and wine business at Sonoma State University, said the study is telling growers what they already know. “Some people may still be skeptical about global warming, but not anyone in the wine industry,” she said. “Everyone believes it, because everyone sees it year by year–it’s here, it’s real, it’s not going away.”