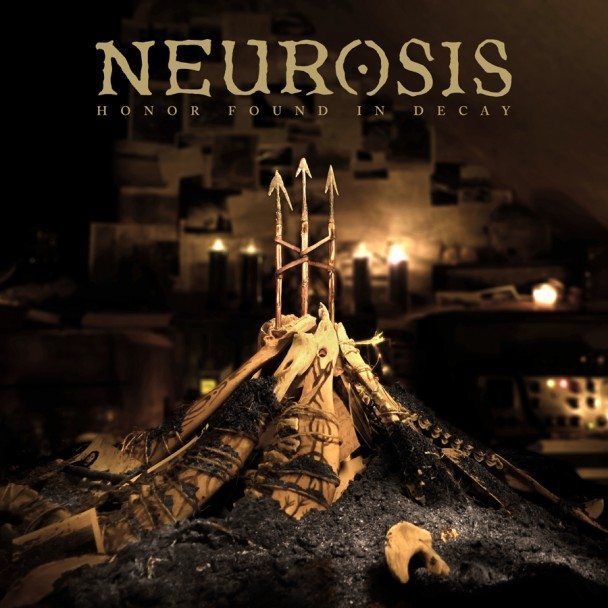 Progressive metal titans Neurosis have never been the sort of band to release a Spring record every year, however this year we have an album released just in time for the red fang of Christmas.

By far the most direct record Neurosis have released, the psychedelic weirdness that once differentiated this band has now been diluted by a legion of copyists… and perhaps wisdom. The sulphuric anger that burned out of the middle period releases (Through Silver in Blood 1996,Times of Grace 1999, A Sun That Never Sets 2001,) has been tempered, the wildness coalesced into sweeping melodies, a deeper truth exhumed.

To use a Radiohead analogy, for a band that repeatedly made one KID A-esque abstract expressionist masterpiece after the other, here they’ve taken a step back and made the introspective Ok Computer of tribal militarism; Honor Found in Decay.

The album opens with We All Rage in Gold, subtle guitars chime in against a peel of high pitched electronic howl and then builds into a chug-a-long narrative concerning blood and water.  It’s simple stuff, almost forgettable, until we reach the two and half minutes mark and an ominous slow change that reminds us what it is that Neurosis do well; build monolithic atmospheres humming with enough grindcore swing that you’d be forgiven for assuming it was a mastodon trumpeting at the end of a pendulum.

This alone doesn’t make Neurosis a great band but it lays the best foundations for the upper register melodies and chilling samples that, with carnal post-Swans drumming, defines the Neurosis sound. 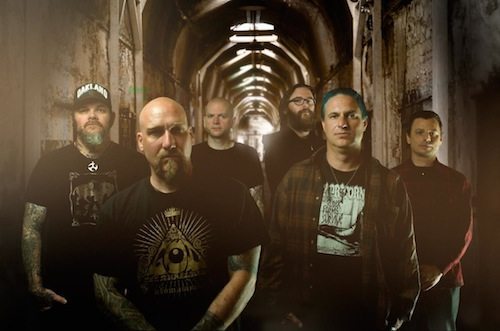 Fans of A Sun that Never Sets (and who isn’t) are given a classic piece of Neurosis-ness in At the Well, which contains a lot of the sturm and drang of the immortal classic From the Hill, echoing a lot of the latter’s dynamic power.

That Neurosis never exhibit any waste on their recording shouldn’t be a surprise to anyone at this time however the focus shown on Honor takes economy to a whole new level. Every note is careful chosen and played with a terse gravitas that clenches the listener throughout the album.

True to form the guitars of Scott Kelly and Steve Von Till avoid every heavy music cliché, tracing instead modal, medieval baroness and European folk figures, interlocking naive melodies which conjure dark age apocalypses as much as their post-nuclear counterpoints.

Of all the elements that make up Neurosis hardly enough attention is ever paid to Jason Roeder’s percussion work. There is something sublime about his playing that keeps a glacial groove going without ever losing the sense of pressure or movement that makes the band so special. It remains to be seen whether drumming gets any simpler than it does on Casting of the Ages but rarely are the drums played with so much feeling and expression.  When responding to a fellow drummers surprise at the size of Roeder’s kit (“a single rack and single floor tom”*) given the size of his sound Roeder replied:

“What else would one need? I’ve been playing a four piece since I was 12 and I still don’t feel like I’ve mastered it.” 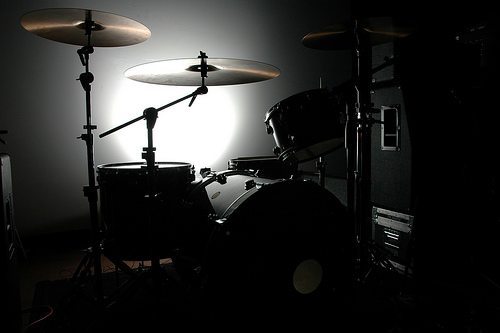 Roeder’s drumming on Honor presents several masterclass lessons in almost any aspect of drumming that could be imagined and hats off to Albini and Co. for recording them so well. The sense of warmth, presence, and space makes this album vital listening for anyone interested either drumming or the recording of percussion.

New endings. What will surprise many listeners is a shift in the tone of many of these recordings as the band seem to flirt with major scale conclusions to their compositions or in other terms the songs mature into a soaring, albeit hard won, optimism. Of course Neurosis tracks on previous albums reach an inevitable end but the result was more a statement of strength than actual optimism.

Honor Found in Decay could very well be the moment that their fans have been waiting for. It’s feels like a conclusion to everything the band has set out to achieve. Where each proceeding album seemed to strive on many levels; the spiritual, the physically, the emotion and the musical, this album is the final ascent, the moment where the protagonist clears the clouds and goes beyond the material.

A phenomenal piece of work and without question crucial listening for anyone who yearns for music that fancies more than the flesh.

The snare I am currently using is custom built by me. 7×14 solid segmented construction, made of bloodwood (also known as satine). I used this on Given To the Rising and all live shows since. Before that was a 6.5×14 GMS maple that I used since Times of Grace.  My main kit is custom built w/ maple shells. I aIso gig and rehearse on a new PDP Platinum series.  I use DW hardware exclusively. Cymbals are all Paiste 2002 rides.  24″ Ride – above kick on right. Older 24″ ride cut to 23″ – above hats on left, 20″ Ride – far right above floor tom, Hihats: two old 22″ Power Rides cut to 17.
Drummerworld Discussion Forum.

industrial listen to this you swine Metal songwriting