It was a bouffant creature, hapless and discreet, flitting its flitty way around the US/Mexico border with nobody caring a damn about it until its resemblance to the US president brought it to the notice of the general public.

This week’s newly discovered moth is an antipodean migrant freeloading its way to European shores.

Who knew moths would become 2017’s allegorical insect of choice?

As travelling in the 21st century is easier than ever, so is for species to make their way to new areas, sometimes increasing their distributional range, or even establishing whole new habitats. On the other hand, when they leave their natural predators and competitors behind, and find abundance of suitable resources somewhere else, they are running the risk of becoming invasive.

Nevertheless, such is not the case of a small, darkish brown moth from the southern hemisphere that is now resident in central Portugal. There, the species do not exhibit invasive behaviour, and so far has been only observed in very low numbers. The discovery is published in the open access journal Nota Lepidopterologica by an international research team, led by Martin Corley, CIBIO-InBIO, Portugal.

In 2012, Jorge Rosete, one of the co-authors of the study, spotted a female specimen that he could not identify near his house. When Martin took a look at it, he placed it in the concealer moth family (Oecophoridae), but was unable to recognise neither its species, nor its genus. It did not took long before a few more specimens were found, including males.

Initially, Martin thought the moth might originate from Australia, given the abundance of eucalyptus plantations in the area where it was found, and the fact that there are more concealer moth species in Australia than on any other continent. However, despite their efforts and contacts with other researchers, they failed to find an Australian species to match the Portuguese specimens. As a result, the mystery remained for the next four years, until a molecular study into moth DNA pulled the curtains. 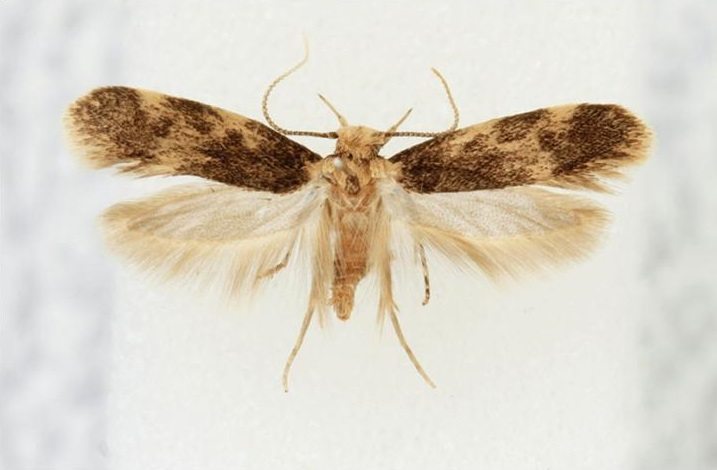 A fragment of DNA, also called DNA barcode, matched three other genetically identical unnamed specimens, originally collected from South Africa, in the DNA database BOLD. Further collaboration with Alexander Lvovsky, Russian Academy of Sciences, allowed the assignation of the specimens to a species name: Borkhausenia intumescens, known from South Africa. However, it did not end there. Further research into museum collections showed that in fact this species had been previously described from Argentina as Borkhausenia crimnodes, and therefore should be named as such.

The origin of the Portuguese specimens remain a mystery, but it is evident that the species is now established in central Portugal. The larvae of other species in the same genus feed on decomposed plants, so this is likely the case with the moth species as well. It might be that it has entered the country through Figueira da Foz port along with imported timber from South America intended for the paper industry.

It is not known if this is a South African species that had first been transported to South America, and then – to Portugal, or if it is originally South American. It is also possible that it is not native in neither of these areas, and instead originates from another country, where it has not even been discovered yet. The moth favours warm temperate zones and potentially might appear anywhere in the world with suitable climate.

Next Story:
They Say the Devil’s In the Deep End