In Gaza : ‘They Gassed Us in Our Beds’

F-16s roar across the sky, drones buzz, and the deep thud of shelling can be heard. 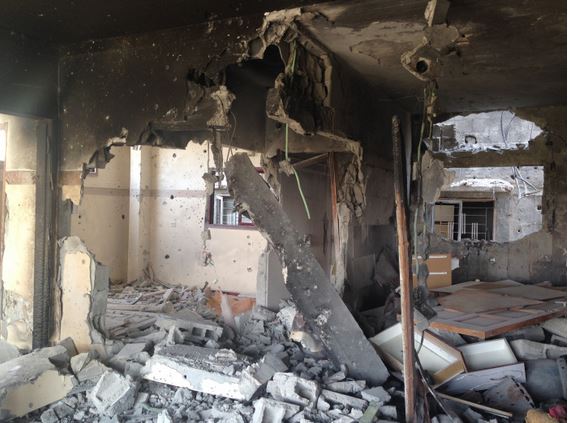 On 31st July, Israel launched a full scale assault on its residents, using poison gas, F-16 and ground troops. Whole neighborhoods have been flattened to rubble, many others are littered with shattered buildings, leaning precariously, their innards exposed to the elements.

Four and five storey apartment buildings used to border one road we drive along, now the road is lined with 20 feet high mounds of detritus. I see doors, window-frames, cribs, wheels – the remnants of homes and lives that no longer exist.

I am here to speak with residents who lived through the horror of that night.

We speak with the al-Masrani family in the shell of their former home.  They lived on the first floor of a five storey building,  There are only three storeys left, and the facade of the building is now rubble in the street.  We make our way carefully up the stairwell, making sure not to fall through the gaping holes or trip on the foot-deep debris.

Remains of the al-Masrani’s apartment

There is no door to their apartment, and it is utterly devastated.  To my left, what remains of a toilet – filled with dust and broken bricks, with the door blown off its hinges. To the right of that, a double bed is just visible, a Minnie Mouse doll perched on the mattress, amid fallen beams, dust and chunks of cement. The family bathroom is knee-deep in the remains of the collapsed ceiling.  We stand in the lounge – before us, the devastated apartment and behind us, devastated Shejaia.  If I take a step backwards, I will simply fall out of the living room into the street.  The wall is gone.

I speak to the patriarch first – he is peaceful and communicative in a way I find unimaginable given the terror to which he has so recently been subjected.  His voice is soft, his eyes bright.

“They gassed us in our beds” He says of the Israeli armed forces.

He tells me that first came the gas, then the apartments above them were hit by a missile. [quote]As I write this, Israel is commencing

another attack on the strip.  Reportedly in

response to Hamas rocketfire which none

of us here have seen or heard[/quote] So in the height of fear, they were forced to choose between remaining in their apartment and likely being blown to pieces like the families above them, or to flee and likely be gassed, shelled or shot in the street like their other neighbours.  They chose to run, at least giving themselves a chance.  This elderly man, his wife and their two sons (in their 20s), took to the streets of Shejaia.

They managed to make it a few blocks before they turned to see their apartment obliterated.  They would not have survived had they remained for mere minutes longer than they had.

He tells me all of this in the sort of understated manner one might discuss a car breaking down.

When you see the video below, of what this family lived through that night, and what they returned to when they came home – you will understand why stoicism is a prerequisite for life in Gaza.

As I write this, Israel is commencing another attack on the strip.  Reportedly in response to Hamas rocketfire which none of us here have seen or heard. I’ve been up and down the Strip and have yet to see a single piece of evidence supporting Israel’s assertions.

F-16s roar across the sky, drones buzz, and the deep thud of shelling can be heard.  All are bracing for a long, hard night.  I think of the Al-Masranis who I left just hours ago: they have nowhere to hide.