[dropcap style=”font-size:100px; color:#992211;”]I[/dropcap]t is always a joy to observe economic theorists struggle to get to grips with humans who do not share their own (often equally speculative, irrational and faith-based) worldview.

On the subject of witchcraft and the ‘evil eye’ curse, a study from American University highlights the but-if-they-don’t-have-a-monetary-system-how-will-they-buy-Coke? bamboozlement of economic imperialism when faced with a culture impervious to its hollow promise:

It’s like explaining to David Cameron that there are migrants in the UK who don’t actually want to integrate into UK society and become model British citizens.

You can almost hear the exasperated foot-stamping.

Believing in witchcraft is a salient feature of daily life in many parts of the world. In worst-case scenarios, such beliefs lead to murder, and they may also cause destruction of property or societal ostracism of the accused witches. The first large-scale economics study to explore beliefs in witchcraft, broadly defined as the use of supernatural techniques to harm others or acquire wealth, links such beliefs to the erosion of social capital.

Where witchcraft beliefs are widespread, American University Economics Professor Boris Gershman found high levels of mistrust exist among people. Gershman also found a negative relationship between witchcraft beliefs and other metrics of social capital relied upon for a functioning society, including religious participation and charitable giving.

It’s long been argued that witchcraft beliefs impede economic progress and disrupt social relations, and Gershman’s statistical analysis supports that theory. From a policy perspective, Gershman’s results emphasize the importance of accounting for local culture when undertaking development projects, especially those that require communal effort and cooperation. Gershman and other social scientists believe that education can help foster improved trust and decrease the prevalence of witchcraft beliefs.

“Education may contribute to an environment with higher levels of trust and mutual assistance, insofar as it helps to promote a rational worldview and reduce the attribution of any misfortune in life to the supernatural evil forces of other people in the community,” Gershman said.

Witchcraft beliefs in Africa and beyond

A major focus of Gershman’s findings involves regions of sub-Saharan Africa. The study draws on survey data on personal and regional witchcraft beliefs, primarily from the Pew Forum on Religion and Public Life. A respondent is assumed to believe in witchcraft if she claims to believe in either “witchcraft” or “that certain people can cast curses or spells that cause bad things to happen to someone.”

Many anthropological case studies document how fears of witchcraft attacks and accusations erode trust and cooperation in African societies. Evidence on the corrosive effects of witchcraft beliefs comes from fieldwork conducted in Tanzania, South Africa, Cameroon, Namibia, Mozambique, Zambia, and other countries, where witchcraft-related fears manifest themselves in diminished cooperation, breakdown of mutual assistance networks, avoidance of joint projects, mistrust in community members, and general decline in social interactions. Gershman’s analysis of the Pew data documents that a systematic pattern of this sort exists in regions in 19 countries of sub-Saharan Africa.

The relationship between witchcraft beliefs, trust and erosion of social capital extends to many places beyond sub-Saharan Africa. Using additional survey data from 23 nations (including those in Asia, Europe, North Africa, and the Middle East), Gershman compiled a broader country-level dataset on witchcraft beliefs. His analysis also reveals a negative association between witchcraft beliefs and generalized trust in the cross-section of countries, similar to that observed for African regions.

Witchcraft may be alone among supernatural beliefs for having a negative correlation to trust. Beliefs in heaven, hell, reincarnation, angels, miracles, and evil spirits have no relationship to trust, Gershman found.

Why believe in witchcraft?

It’s difficult to understand why witchcraft beliefs persist and what purpose they serve. Noted economist and jurist Richard A. Posner theorizes that witchcraft accusations against wealthy community members force them to share their surplus, so witchcraft beliefs promote mutual insurance in societies that lack conventional methods for redistributing resources. Other theories suggest the belief in witchcraft reduces social tensions or de-escalates conflicts; yet that explanation doesn’t square with the fact that witchcraft accusations sometimes lead to cascades of ritual killings. 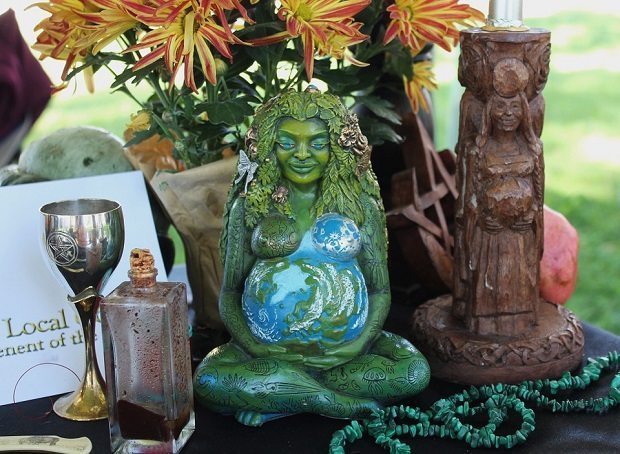 “A belief in witchcraft may be a way to keep order in society, but it’s definitely not the best way,” Gershman said. “It forces one to conform to local norms because any deviation may lead to an accusation.” This type of forced conformity under fear leads to immobility and interferes with wealth accumulation and adoption of innovations.

The consequences of such behaviors likely exceed any potential benefits of witchcraft beliefs, Gershman added. Gershman, who studies the social costs and benefits of culture, has also published research on the “evil eye,” a cultural belief that a person’s envious glance leads to property destruction. The evil eye belief is also harmful to economic progress but in a different way, Gershman said.

“Witchcraft beliefs are likely to erode trust and cooperation due to fears of witchcraft attacks and accusations. The evil eye leads to underinvestment and other forms of unproductive behavior due to the fear of destructive envy, where envy is likely to manifest in destruction and vandalism involving those who own wealth,” Gershman said.