[dropcap style=”font-size:100px; color:#992211;”]B[/dropcap]ouldering – the less dangerous (and consequently more dynamic) version of rock climbing has been singled out by Arizona psychology experts as being an effective anti-depression treatment.

No scorn from us. Although we might also consider walking, running, cycling, or other non-motorised outdoor activities. Depression is a chemical, physiological disorder far beyond a simple case of recurring mopes, and ‘getting a bit of fresh air’ is nowhere near enough intervention to eradicate it fully.

But it definitely helps.

A growing body of research suggests that bouldering, a form of rock climbing, can help build muscle and endurance while reducing stress — and a new study co-led by a University of Arizona doctoral student of psychology suggests that the activity also may be used to effectively treat symptoms of depression.

UA researcher Eva-Maria Stelzer and Katharina Luttenberger of the University of Erlangen-Nuremberg led a team that involved more than 100 individuals in a bouldering intervention in Germany, where some hospitals have begun to use climbing as a therapeutic treatment.

The participants were randomly split into two groups. One immediately began the intervention, while the other group had to wait to start bouldering, which involves climbing rocks or walls to a moderate height without ropes or a harness. Each participant bouldered for three hours a week over the course of eight weeks.

The research team measured the depression of group members at different points in the study using the Beck’s Depression Inventory and the depression subscale of the Symptom Check List Revised, known as SCL-90-R.

The team’s major finding was that, during the therapy, the immediate intervention group’s Beck’s Depression scores improved by 6.27 points, but for the same time period the group that was initially wait-listed improved by only 1.4 points. This drop in score reflects an improvement of one severity grade from moderate to mild depression levels.

“Bouldering, in many ways, is a positive physical activity,” said Stelzer, who began researching the benefits of bouldering while completing her master’s in psychology at the University of Erlangen-Nuremberg in Germany and is now completing her doctorate at the UA. “There are different routes for your physical activity level, and there’s a social aspect along with the feeling of an immediate accomplishment when bouldering.”

Stelzer will present the study and findings during the 29th annual Association for Psychological Science Convention, to be held Thursday through Sunday in Boston.

In addition to Stelzer and Luttenberger, University of Erlangen-Nuremberg researchers involved were Stefan Först, Elmar Gräßel, Matthias Schopper, Johannes Kornhuber and Stephanie Book. The team has since expanded the study to compare the bouldering intervention with cognitive behavior therapy involving individuals in Erlangen, Munich and Berlin.

“I hope this study and future studies are able to impact a life,” Stelzer said. “Depression is a severe illness. It is one of the most common mental disorders in the United States and worldwide. Even though a variety of treatment options exist, less than one-third of people receive treatment for their symptoms.”

The National Institute of Mental Health reports that anxiety disorders, including depression, are the most common mental illnesses in the U.S. About 18 percent of the nation’s adult population, or about 40 million people, cope with anxiety disorders. 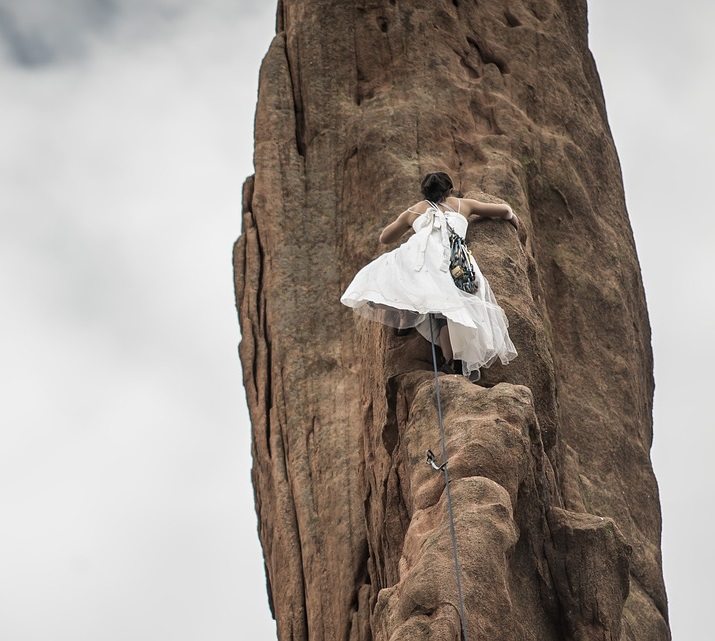 Invested in improving interventions to aid with such conditions, Stelzer, Luttenberger and Schopper, who have offered bouldering sessions for patients at a care center in Germany, drew on their own experiences as avid rock climbers and boulderers to investigate the benefits the sport could provide to those dealing with anxiety, depression, social isolation and self-esteem issues.

“Patients enjoyed the bouldering sessions and told us that they benefited greatly,” said Luttenberger, a psychometrics expert at the University of Erlangen, located just north of Nuremberg in Germany, about the sessions Schopper offered. “Since rumination is one of the biggest problems for depressed individuals, we had the idea that bouldering could be a good intervention for that.”

For the study, most of the patients involved were new to bouldering.

Also during the study, both groups were taught about how to cultivate positive social interactions and about meditation and mindfulness throughout the study. All told, the study involving the intervention and follow-up lasted 24 weeks.

Stelzer explained that bouldering has a number of other important characteristics that make it especially beneficial for the treatment of depression, namely that it helps boost self-efficacy and social interactions — both of which hold innate benefits for dealing with depression.

“You have to be mindful and focused on the moment. It does not leave much room to let your mind wonder on things that may be going on in your life — you have to focus on not falling,” Stelzer said.

“Bouldering not only has strong mental components, but it is accessible at different levels so that people of all levels of physical health are able to participate,” she said, adding that because many people who are depressed deal with isolation, bouldering as a treatment could bolster physical activity and be used as a social tool allowing people to interact with one another.

Given the positive results, the team believes that bouldering may be used to complement traditional care for clinical depression. Team members are now working to develop a manual that could be adopted for an eight-week program integrating bouldering and psychotherapeutic interventions for groups.

Said Luttenberger: “I’d always encourage patients to do the sport they like — may it be climbing or something else — as sport is a wonderful possibility to prevent all possible sorts of illnesses, mental and physical.”

Next Story:
Glug! No Grave But the Sea (Alestorm)