What makes red algae so different and why should we care?

[dropcap style=”font-size:100px; color:#992211;”]R[/dropcap]ed algae. Should be in your parents’ Sunday supplements later this week.

Because frankly, girl, acai shakes and buddha bowls are so ITV right now.

The red algae called Porphyra and its ancestors have thrived for millions of years in the harsh habitat of the intertidal zone–exposed to fluctuating temperatures, high UV radiation, severe salt stress, and desiccation.

Red algae comprise some of the oldest non-bacterial photosynthetic organisms on Earth, and one of the most-ancient of all multicellular lineages. They are also fundamentally integrated into human culture and economics around the globe. Some red algae play a major role in building coral reefs while others serve as “seaweed” foods that are integral to various societies. Porphyra is included in salads (as are related genera of algae), is called “nori” in Japan, where it is used to wrap sushi, and “laver” in Wales, where it is a traditional and nutritious food ingredient.

Despite Porphyra‘s ecological, evolutionary, and commercial importance, there is still relatively little known about its molecular genetics and physiology. 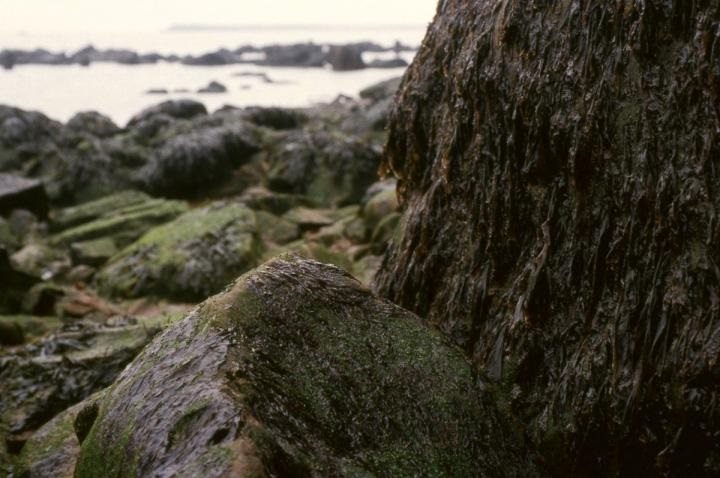 That’s why a team of plant scientists, including Carnegie’s Arthur Grossman, sequenced and analyzed the complete genome of the red algae Porphyra umbilicalis. The genetic makeup of this extraordinarily hardy organism has provided researchers with a better understanding of red algal evolution and the ways in which these organisms cope with their brutal intertidal habitat.

Their findings are published by Proceedings of the National Academy of Sciences.

The team’s analysis showed that Porphyra and other red algae have minimal structural elements that make up their cellular cytoskeletons as compared to other types of multicellular organisms. This may explain why the multicellular red algae tend to be “small” in stature.

Likewise, the team found genes for cellular processes that help Porphyra and its ancestors survive under extreme duress–including “sunscreen”-like compounds for protection from UV radiation and other compounds that allow them to withstand desiccating conditions, in addition to various proteins that ameliorate the potentially toxic consequences of absorbing strong sunlight. Furthermore, the extremely resilient, flexible walls of Porphyra cells allow them to dramatically change their volume as they lose water when they are baking in the sun and drying in the winds, and to withstand the forces of beating waves.

“The information we gleaned from the Porphyra genome shows us just how different red algae are,” Grossman explained. “But it is also interesting to note that organisms evolutionarily related to the red algae have had profound impacts on human health and marine ecosystems.”

For example, one group of organisms that evolved from the red algae, the apicomplexans, is non-photosynthetic and includes the plasmodium parasites that cause malaria. Another algal group that evolved from the red algae, the dinoflagellates, is responsible for toxic red tides, but is also the provider of nutrients that sustain corals, which serve as the foundation of reefs (which are homes for numerous animals).

As Grossman states, “As we learn more about the different algal groups and their evolutionary histories, we are learning more about the biotic pillars that continue to be a major foundation for sustaining and shaping life on our planet.”