Community bonds in human groups have a long prehistory, as a newly-examined megalithic tomb in central Spain demonstrates.

And for faddish followers of dietary snake-oil salesmen – the staple food around 6000 years ago was mainly grain. Low-carb Paleo that, if you will.

People of the Neolithic age around 6,000 years ago were closely connected both in life and death. This became evident in a detailed archaeological and anthropological of a collective grave containing 50 bodies near Burgos, northern Spain. In the pioneering study, researchers used a whole array of modern methods to examine the way of life in the region at that time. Published in the academic journal PLOS ONE, the research was conducted by anthropologists at the University of Basel and archaeologists from the University of Valladolid.

The collective graves of the Neolithic period were made mostly of stone and were large enough to hold many bodies in a communal space. The megalithic tomb in Alto de Reinoso, Burgos differs from this in only one respect: the burial chamber had originally been made from wood over which a stone mound was erected afterwards. Radiocarbon dating suggests that the tomb was used by a community living between 3700 and 3600 AD and spanning about three to four generations. At least 47 bodies have been found. “While the lower layer has been relatively well preserved, numerous disturbances have been observed in the upper layers such as missing skulls, which could be due to a certain kind of ancestral worship,” says Prof. Manuel Rojo Guerra, from the University of Valladolid, Spain. 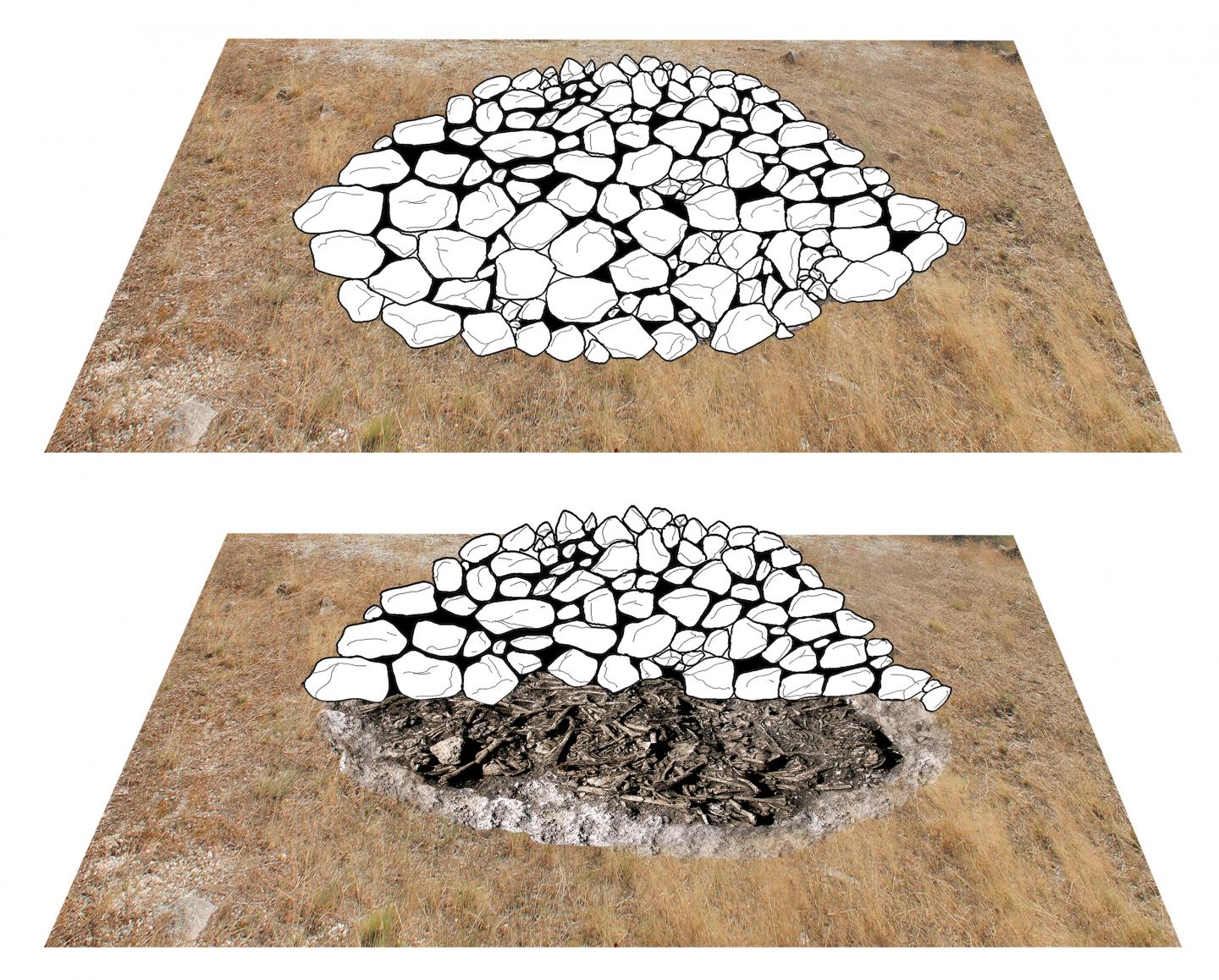 Reconstruction of the original appearance of the megalithic mound.

In order to examine the Neolithic community’s way of life, researchers used modern methods to collect individual data such as age, sex, body height, disease, stress markers and signs of violence. This data was also supplemented by information about diet, area of origin, mobility and familial relationships. “This is the first study that presents a detailed picture of how Neolithic people were connected in life and death,” says lead author Prof. Kurt W. Alt, visiting professor at the University of Basel.

Almost half of the deceased were adults; the other half were children and adolescents. The average body height was 159 cm ± 2 cm for men and 150 cm ± 2 cm for women. The adults showed skeletal stress markers and various stages of degenerative diseases of the spine and joints, healed fractures, head injuries and dental diseases such as caries.

Molecular genetic studies also revealed the relationships between individuals in the group, especially on the maternal side. Furthermore, there is evidence that bodies buried close to each other were in some cases also closely related genetically. Apart from three individuals, all of the deceased grew up in the area around the collective grave. A reconstruction of the diet further demonstrates the homogeneous structure of the farming community: the staple food for everyone was cereals (wheat and barley) and animal proteins (sheep, goat and pig in particular).