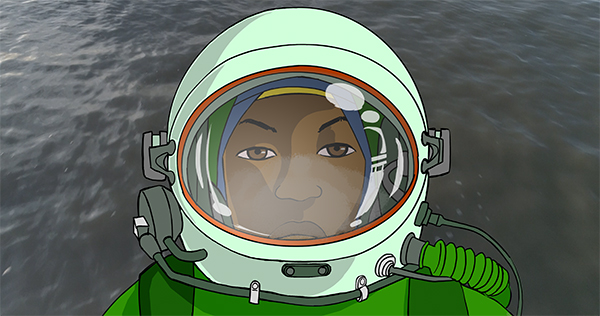 The narrator of Reliquary 2, a new film by Larry Achiampong, conjures an image of Big Ben, London‘s iconic landmark and the world’s most famous clock, bending and melting like a ‘marshmallow’ as striking drone footage draws our gaze over the skeleton of a building anchored in the midst of the sea. These are the audio-visual contemplations of Achiampong, created as a direct address to his children at a moment of reconfiguration. ‘Time, as we know it, has become formless,’ he says.

The film was commissioned by John Hansard Gallery in response to the ongoing pandemic and enforced periods of isolation, and whilst the narration is not by the artist himself, the language used sets an intimate, thoughtful tone that negotiates the gap between childhood innocence and the pervading presence of illness, grief and death. The artist’s original score further adds to the atmosphere whilst also demonstrating Achiampong’s acute awareness that the work is the forming of a personal and collective memory, that will echo through the future.

Reliquary 2 is a continuation of the artist’s Relic Traveller series (2017), a multidisciplinary project that investigates a postcolonial perspective informed by technology, agency and the body, and narratives of migration. Like the other works in the series, the film features an alter-ego character, dressed in kind retro-futuristic space suit, although here the character has been animated by London-based illustrator Wumi Olaosebikan to appear as an avatar, referencing the virtual spaces that we have been occupying in absence of social interaction, digital communication technologies, video games, and an apocalyptic vision of a drowned planet that bears connotations of climate change, but more directly, implies the devastation of the virus and the subsequent, reshaping of normality and conventional truths.

However, despite the trauma and injustice the narrator illustrates, this is also a film of immense beauty, and hope. As the avatar traverses the screen, Achiampong’s drone footage shows us the perpetual movement of sea, the golden sunlight dripping onto the surface of the water, the sky deepening into a warm sunset. While the contextualisation of our own existence within the context of nature’s cycle of deterioration and regeneration is, generally speaking, obvious and overused, the artist builds a much richer audio-visual narrative that embraces fragility as a source of hope and freedom in contrast to the macho, racist culture of the ‘old world’ (our recent past), which is deliberately described as non-human: ‘a machine that will try to turn your lights out at a hint of any resistance to its ways.’

In this light and against the striking visuals of natural landscapes, the presence of a non-human figure – the avatar – is occasionally jarring, but it is a necessary layer that prevents the work from becoming either overly romanticised, or didactic, and also, serves as an important symbol of more fluid and inclusive perspectives, and future ways of being.

Previous Story:
MACRO Radically Rethinks the Role of the Museum 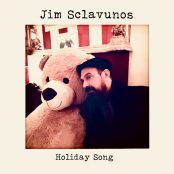