Looking at paintings requires an ability to place works in the historical context of the medium. Only then can we see the human significance of the work. It is no good looking inward to brain patterns. That is not where human significance is to be found.

It has an intriguing press release written by New York critic, David Rimanelli, in which you will find the following curious reflection,

“[W]hen you look at the unconscious mind – that is, literally look, with your eyes – what do you see?  After sitting for a while in a dark room, or when you’re about to doze off at night, what you see is [sic] phosphenes: those patterns, dots, grains, and swirls of (initially) weak color on a dark background caused by the more or less random firing of neurons in the retina itself.  These usually start off more abstract but, as the brain’s automatic visual system begins to interpret them, they take on more figurative features, until the stage where they’re called hypnagogic hallucinations – not any of the types of stronger hallucinations that arise in the brain, but something so unmediated that even less conscious animals than ourselves – insects?  planaria? – might often see something very similar.”

An aside: Planaria do not see. They have eyespot regions which are photoreceptors; but these eyespots do not have lenses. They produce reactive behaviour in the planarian by activating light avoidance. Here is an image of one such – its eyespots looking like they’re looking right-back-atcha.

Insects have eyes of compound lenses. However, it is eccentric, to say the least, to wonder what experiences flatworms and bluebottles might have, that could compare with, or inform, our appreciation of the visual arts. Neither worms nor bugs can close their eyes. Neither worms nor bugs have, in any interesting way, unconscious minds; nor are they capable of acting intentionally. We cannot either praise or blame the flatworm or insect for its moral or aesthetic outlook.

Nuwar is a storm worm. But it is also the name of a certain sort of malware. So Kimmel’s work, Rimanelli means to tell us, can be seen as the unseeable goings on that confound our computers. The analogy between the two manifestations, however, will only hold so far.

Nevertheless, what is interesting about Rimanelli’s passage is its audacious challenge to the commonly accepted view of perception. It holds two surprising theses.

First, it assumes (indeed, it presumes) that we literally see the unconscious mind. This is a bold thesis, and one that I think is supportable and has explanatory value when considering works of art. It relies upon the idea that there is more to looking at something than mere colour reception. Indeed, Rimanelli writes, ‘the brain’s automatic visual system begins to interpret,’ the random firing of the neurons in the retina. Although, how, quite, the brain can interpret random neural activity escapes me.

The second view is that we see things with our eyes closed. That seems false to the facts; and places too strong a burden on our conception of perception.

To sketch the thought: We literally see intentions in works of art. When I look at a Jackson Pollock, for instance, I see the gesture in the art as that stands before me on the canvas; feel the weight of the throw, so to speak. We see the painting as the extension of Pollock’s thought.

Against the idea that the brain interprets – rather than the mind – we might consider the following: that whilst every event in the physical world seeks a causal explanation, this cannot be true of the mental.

The following two thoughts have a logical – rather than a causal – connection. (1) Grass is green. (2) Something is green. The connection, that is, lies in the structure of consciousness; and not in the structure of the (physical) world. Note that the truth of (1) need not deter us. For the structure of the logical connection is, If grass is green, then something is green. The logical structure of consciousness is not to be framed in the causal networks of neural activity. Brains aren’t minds. Many creatures, planaria and bugs included, have brains; but few have minds – arguably, only human beings; and, some have thought, not all of these. Brains process; Minds interpret.

This gets us to see that perceptual experience can contain more than mere sensation. I have drawn the following freehand. I remember, as a boy, in a school examination being asked to prove that two sets of angles in a parallelogram were necessarily equal.

The examinee had to provide proof that ∠ABC = ∠ADC; and that ∠DAB = ∠DCB. To so prove the necessary equivalence, we were to draw upon Euclidean axioms. Whilst I cannot now remember those axioms, I can see that the drawing is a parallelogram (given the chevrons). However, once I see the parallelogram, not only do I see that angles specified are equal, I see that they are necessarily equal; and that means I can see facts which are necessarily true. This is quite a telling feature about human perception.

The second reflection is wrong-headed. We do not see with our eyes closed (even if we do have visual sensations). Hallucinations (strong or weak) are not perceptions. ‘Perceive,’ is what philosophers call an ‘achievement verb’. If I perceive some state of affairs, then that state of affairs obtains. I cannot perceive with my eyes what is not there to be seen.

What am I supposed to see when I close my eyes? If I undergo visual experience, it is merely at the sensational level. I do not see sensations. Sensations have no depth; no determination. They are merely visual arrays; not even patterns. To see patterns is to organize sensations. Into what are we to organize these (or this) internal phenomena (phenomenon)? There is no way of identifying objects within the experience – if, that is, we are to count it as an experience.

So, pace Rimanelli, when I close my eyes and see stars across a blood red sky, I am providing metaphorical content to mere sensation. I do not shift my attention to look left or right. I do not direct my eyes upon discreet objects; nor do I focus on the near, middle or far distance; nor do I squint, shield my eyes from the light; nor do I do any of the things I do when looking. I merely undergo some sensational activity that, at its best, is mildly irritating. 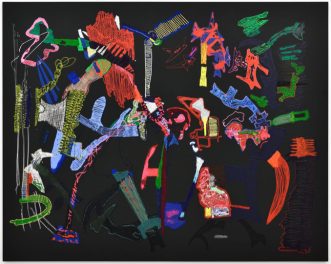 The paintings themselves have all sorts of features that require perceptual acuity of the sort unavailable to bare sensation. Passages of colour are built up in lattices requiring overlap and the cake-icing application calls upon binocular vision to get us to see the actual depth laid out across the surface. 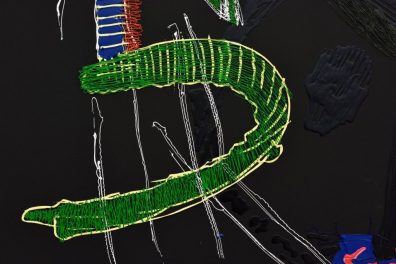 Rimanelli attends to the black support, ‘Kimmel’s abstract biomorphs skitter through pitch black abyssal depths…’ Not really. It’s more ‘blackboard black’, even and flat. Indeed, had Kimmel paid more attention to the painting of the ground, it might better have looked as if the discreet objects that inhabit his black world were more at home; sitting down, so to speak.

Nevertheless, the paintings, allowed to speak for themselves, belong to a history of semi-narrative painting. They have about them, the object incorporated into a painterly space, almost as if they are collages. The overall world of neon coloured objects, perhaps, says something about this artist’s ‘unconscious’. It would be interesting to read someone who knew their stuff writing properly about that.

There is food for thought here; and it is well worth a visit.

Next Story:
No Plastic – Folking Fantastic