Evangelion, or the beast that shouted “I” at the heart of the world. Legendary series reaches out. 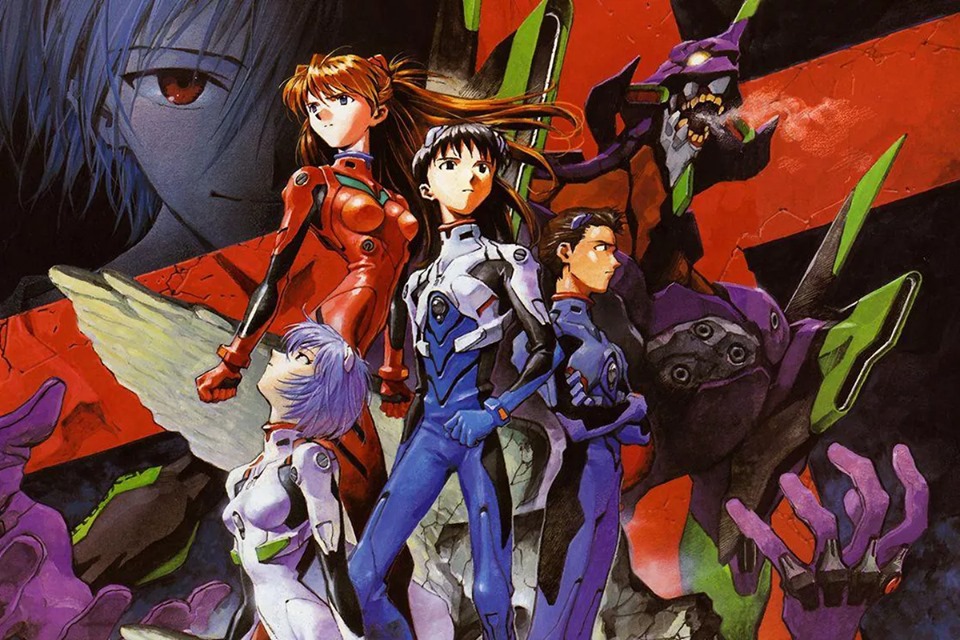 [dropcap style=”font-size:100px; color:#992211;”]S[/dropcap]o, as Neon Genesis Evangelion arrived on Netflix last week I felt, as what you could call a life-long fan, I should probably write something about it. So buckle up for a proper essay.

Whilst it certainly isn’t for every one, with the sheer amount of crap anime doing the rounds these days, it would be very easy for the uninitiated to disregard it completely and leave it rotting firmly within the pile of eye-rolling manga slurry. This would be an understandable but potentially large mistake.

At first glance Evangelion would seem to have all the usual tropes – A future Japan entrusting a group of teenage pilots with gigantic robots to fight equally huge monster invaders, squeaky twat characters, over the top comedy and some pretty tedious / awkward ‘fan service’ peeky-boo panty moments.

So I can almost completely understand people’s reservations about dipping their toes in, but now that it is available to watch uncut in its entirety on Netflix, Evangelion is now open to an entirely new audience and it would be a shame for people to pass this cultural phenomenon and miss what many millions of fans all over the world would consider to be pretty much a life changing story.

It’s always such a colossal task to try and explain Evangelion to someone who has never heard if it, or is usually put off by this kind of anime, but let’s start by saying Evangelion is not at all what it appears to be.

In the near future, the world has been devastated by the second impact (the first being the meteorite that wiped out the dinosaurs) killing around 70% of all life on the planet. In the wreckage and ruins of the disaster, humanity has worked to drag itself from the ashes and begin again, pushing the limits of scientific discovery and technology in order to heal the world.

Just as humanity begins to recover, strange beings of unknown origin known only as Angels begin attacking the earth with the intent of wiping out humanity once and for all.

Cue Nerv – a top secret scientific organisation formed to stop them. Nerv have developed a series of giant robots known as Evangelions that can only be operated by specially selected children via a psychic link.

The story begins when socially challenged and somewhat tragic teenager Shinji Ikari is called to Tokyo3 out of the blue by his estranged father Gendo Ikari, who also happens to be chief commander of Nerv.

Soon after arriving, the first Angel conveniently appears and begins its path of destruction, Shinji is abruptly told he is to be the pilot of Evangelion unit 1 and must do all he can to stop the angel and save all of humanity. With absolutely zero training. Why? Because of reasons! Not too much pressure then.

What follows over the next few episodes is a mixture of some pretty epic giant robot battles, complex sci-fi mythos, lots of giggly school kids, silly anime humour and some seriously confused disillusioned tormented teenagers riddled with angst.

BUT amidst all of that we are given occasional subtle glimpses of something altogether darker, hints that we are only really scraping the surface, beneath it something sinister is stirring, just enough to tantalise you and set your imagination whirring, it’s clear we aren’t being shown the whole picture.

It would be a crime to post any specific spoilers at this point and I wont, but believe me when I say that by the time the show has reached its mid-point, it’s hard to believe you are still watching the same series.

It is a pure descent into darkness, metaphysical torment and mind-bending cataclysm that has no equal. The finale (including the last 2 episodes and the mind-boggling film) is one of the most visionary indescribable events in cinema history that is deeply profound, confronting, dense and distressing but also awe inspiring.

You’ll need to be open minded and thick skinned to get through it, but if you do, I doubt it is an experience that will ever leave you.

Evangelion is now around 25 years old and is still considered by many film critics as one of the most sophisticated and complex pieces of modern popular culture. Its impact is felt by its fans decades on and there’s some big reasons for that i’ll come onto shortly.

Many of its themes and events were thought unfilmable and to be honest, its a miracle it exists at all.

Due to its themes and content, Evangelion will always be divisive, it has to be by its very nature, it is not for everyone as I’ve said, that is fine and understandable, but for others it is an essential work of art that has proven life-changing for some.

At this point if you are convinced, maybe hop off and get watching it. I’m going to begin writing in more detail about the origins and philosophies + impact of Evangelion. So this really is for people who have either seen it or need a little more context to invest time into it, I can’t promise there won’t be spoilers.

To understand Evangelion completely you need to understand its creator Hideaki Anno and what he was going through when he worked on the series.

We will get to that via central character Shinji Ikari. Shinji is one of those unique stand out characters in cinema, which we see so rarely – one that pretty much nobody really likes. Which is pretty bizarre, as liking the central character (or at least loving to hate them) is normally a prerequisite for a popular franchise, be it a film or TV show.

I’ve spoken to countless eva fans who all say the same thing – love the show, but damn, Shinji is just so fucking annoying and hopeless.

Shinji is an awkward, socially inept, anxious coward for whom connections with others are terrifying, as they open him up to the possibility of more pain, betrayal or hurt. He is isolated, miserable and joyless. A person that runs from any kind of challenge or conflict, finding it easier to get through life by just doing exactly as he is told.

As the story unfolds we are constantly feeling annoyed with him, angered by his actions, willing him to get his bloody act together and grow some semblance of a spine. Although we don’t particularly like him, he is somehow inexplicably engaging and for some reason we never entirely write him off.

The simple reason for this for many people is that Shinji increasingly becomes uncomfortably familiar, especially as things grow more intense.

We know him because there is a Shinji that exists in most of us, that manifests itself from time to time or at particular chapters in our life when we perhaps aren’t as confident as we would like to be.

He makes us so uncomfortable as he represents for most of us what we see as our most undesirable traits that we wish to step away from or hide from others.

The reason that he resonates with us as a character and feels so authentic is that he is in fact a brutally honest projection of a real person. And as it turns out, we aren’t so very different from one another.

That person is Director and creator Hideaki Anno.

When he began working on Eva, he had already suffered many long years of intense depression and had at times grown almost completely isolated from others. He knew he wanted to create an awesome new giant mech show but saw it as an opportunity better understand what he was going through by pouring his innermost self into the lead character.

I have never in my life seen a creator expose them self so brutally or honestly, almost like he was flogging himself publicly. Desperately trying to exorcise whatever it was that was ruining his life.

As I’ve said, Shinji appears to be a truly hopeless character, almost always isolated and cut off from others. When others try to show him love or some affection, he turns away

This grants us a very intense and personal insight into how Anno was feeling during production. Right from the first few episodes, one of the central themes is loneliness.

In one episode entitled the hedgehogs dilemma, supporting character Dr Ritsuko Akagi muses that Shinji reminds her of the plight of hedgehogs written about in poetry. They yearn for warmth and companionship of other hedgehogs, but the closer they get, the more their spines injure each other.

It is reported that half way through production of the show his depression became morbidly severe and almost killed himself.

This manifests itself harshly and severely during the series. The fun playful colourful vibe and the charming characters we have come to love are suddenly, swiftly taken from us. Their spirits so broken and crushed that one is found gaunt and starving in an old rusty bath tub after going missing for 10 days, unable to eat or drink any more following the intense mental anguish they have been exposed to. It’s harsh, deep and emotionally taxing stuff.

We are assaulted with sudden extreme violence and awful circumstances completely changing the tone of the show, and eventually spirals into total oblivion.

As Hideaki was nearing the end of the writing process it is said that he was struggling to come up with an ending as things in his personal life had deteriorated so much.

Suddenly he had a life-changing breakthrough – a friend gave him a book on human psychology and depression, a condition that had little understanding or recognition during that time.

After reading the book and researching the condition all he could, he finally understood the affliction that had been with him every day his entire adult life, armed for the first time with hope, he raced to rewrite the final two episodes.

The controversial result featuring brutal unfinished pencil lines, frenetic surrealist imagery, photographs and pounding metaphysical mental torture is an astounding heartfelt literal plea to everyone around the world who might be watching and understanding:

Please, whatever you do, do not succumb to isolation, do not give up on love or being loved. You may not like yourself right now, but perhaps you can perhaps learn to love yourself in time. It’s alright for you to be here.

It is then that you realise everything, the story, the human instrumentality project, this vast franchise, loved around the world was built purely on one man’s desire to not feel lonely any more, stunningly expressed with Shinji’s ultimate decision during the finale that changes the course of human history.

It turns out the message was received loud and clear, it’s easy to see how this series has literally changed lives, and why it is so cherished and highly regarded by so many people around the world.

Final note: Netflix has kindly provided the full series plus the end of Evangleion film. The film is a remake of the final 2 episodes of the series which take place in the metaphysical plane, the film shows what happens in the physical world during that time and is widely considered the true ending and a masterpiece of film making. So watch the series and then the end of Evangelion (in Japanese with subtitles of course!!) and you’ll be golden. You can ignore Evangelion (True) the second film currently listed – it’s merely a catch up of sorts, featuring cuts from the series. 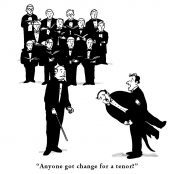 Next Story:
Seeing is Believing