[dropcap style=”font-size:100px; color:#992211;”]H[/dropcap]eard the one about the Great Beast, the brilliant rocket scientist and the science fiction writer with delusions of grandeur? If not, please read on.

But first a pocket history of Western Occultism: during the Crusades many European warrior priests became ‘infected’ by the magic of the Orient, and in particular, the Cabala, a mystical system based around emanations released from the symbol of the ‘tree of life’ by sustained concentration.

This infection soon coalesced into a chivalrous organisation known as the Knights Templar, who rapidly gained money, power and influence. So much so that the Vatican became concerned and, with the help of the King of France, organised a ruthlessly efficient coup, took possession of all Templar money and lands, then tried and executed many members of the organisation on charges of conspiracy and black magic.

Those who escaped went far and wide, organising themselves into underground cells or Secret Societies, many with Masonic connections. By the end of the nineteenth century this ‘seed scattering’ had produced a curious flower on the English cultural landscape; the Golden Dawn Society. Its celebrity members included William Butler Yeats, Bram Stoker, Algernon Blackwood, Sax Rohmer, Allan Bennet and the notorious Aleister Crowley.

In Egypt 1904 Crowley underwent a life changing experience. His wife Rose had a vivid dream, which instructed her to lead him to a particular item in the Cairo Museum. Its catalogue number was 666. His exposure to this item triggered a series of visitations from a preternatural intelligence. Over three days this discarnate entity dictated to AC, what has become known as, The Book of The Law.

This futuristic spell book is both a love song and a call to arms. It links quantum physics to ancient witchcraft and its very existence gave Crowley a terrible headache.

wickedest man in the world 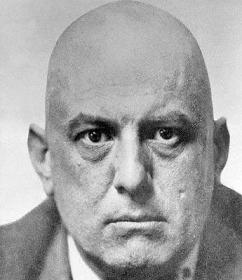 It made an abrupt end to the whole complex, ritualistic, graded systems of magic that Crowley had diligently mastered. In a sense it made him redundant. Ever resourceful the ‘wickedest man in the world’ swiftly established the book as the central pole of an organisation he had recently acquired from a German named Karl Gelmer.

It was called the Order of the Temple Orientis and its members would follow the law of Thelema, or the magical will.

By 1946 the OTO had established a chapter in Pasadena California, which was run by an admirer of Crowley, one Jack Whiteside Parsons (JWP – no relation). This handsome all-American genius was also a member of the Suicide Squad, a group of ‘can do’, ‘seat of the pants’, ‘let’s blow up stuff in the Mojave Desert!’ rocket scientists who were the pioneers of, what would eventually become, NASA.

By day JWP was a founding partner of the Cal Tech Company and had already invented GALCIT 53, a whole new category of solid rocket fuel. Over the next half century its plasticized descendents would be used to fire Polaris, Poseidon, and Minutemen missiles as well as the rocket boosters that powered the space shuttle.

By night it was a different matter.

His residence the rambling Fleming Mansion at 1003 Orange Grove had acquired something of a reputation in the neighbourhood. It was known as The Parsonage, doubled as the ‘Agape Lodge’ and housed a number of less-than-desirable-tenants including an opera singer and several astrologists.

Although no charges were ever pressed, Police visited the premises on a number of occasions. They had received various complaints: a pregnant woman had been seen jumping nude through a fire in the back garden, a 16 year old boy claimed that three of Parson’s followers had forcibly sodomised him and there were several accusations of black magic practices made by ex-lodge members.

Into this heady atmosphere, swirling with sexual tension, stepped a bulky red haired man who had recently been discharged from the Navy.

L. Ron Hubbard was in the house.