Making a Cult of Yourself: Hubbard Vs Crowley [Conclusion]

The last years of Hubbard’s life saw him deposed as leader and reduced to a figurehead in a de facto coup, led by young scientologists who had actually been born into the cult. Their argument being that even though Ron was a genius he could never actually be a ‘true’ scientologist as he hadn’t been subject to Church training until after adulthood.

[dropcap style=”font-size:100px; color:#992211;”]T[/dropcap]echnically the revenge demon Bartzabel, summoned by Parsons, was under the fire sign of Mars.

But it was a sudden, unexpected windstorm that ripped off her sails and forced the Harpoon to turn back into port. 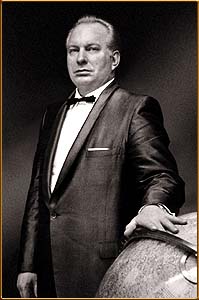 The US Coastguard rescued the crew and detained Hubbard and Betty in custody. Betty wrote that she and Hubbard were ‘desperate’ during the squall and scared that they would not make it back to shore.

The final chapter of this magical saga was enacted in the banal surroundings of Dade County Florida Circuit Court where Parsons sued Allied Enterprises, recovering only a schooner and a yacht. Hubbard retained possession of the Harpoon and was ordered to pay Jack’s legal fees.

And that was it.

Off they went into their various futures: Ron to have a child with Betty then, a few years later, create a new church, which would flourish in the nineteen-sixties and gradually develop into an organisation which now rivals the Vatican for its worship of power, secrecy and money. JWP was to live a short and troubled life with constant financial worries and an FBI investigation into his ‘communist’ activities at the Agape Lodge, followed by an explosive death.

which now rivals the

Vatican for its worship of power, secrecy and money. [/box]

On June 17th 1952 Jack was blown to pieces while working with fulminate of Mercury in his home kitchen/laboratory. He probably dropped a tin coffee can filled with the stuff. The resulting blast blew off his right forearm, broke his other arm and both legs, shredded his shoes and left a gaping hole in his jaw. Parsons was coherent enough to give the medical staff instructions as they loaded him into an ambulance. He died 37 minutes later at the Memorial hospital in Pasadena.

Aleister Crowley died in 1947 but the OTO quietly continues to function. His radical ideas on love, sex, drugs and their ritual power infected what Otis Redding called ‘the Love Crowd’, influencing Leary, Lennon and Led Zeppelin amongst others. Crowley really never went away. Each new generation discovers the Master Therion hiding under their beds, offering a bell, a book and a candle for those who dare to seize them.

What of the parallels between Scientology and the Order of the Temple Orientis?

The OTO seeks the stars within and Scientologists doggedly recruit stars of the silver screen. Both cults revere silence, believe in invisible spirits, or aliens, or both, and each has experienced schismatic activity.

The Process was a sex/death cult formed by ex-Scientologists during the swinging decade, with a neat line in marketing and the ability to draw money from the pockets of rich people. Their activities are imaginatively described in a novel named after the cult by Brion Gysin, inventor of both the verbal cut-up and the Dream Machine. The Process faded away to cult heaven in the mid-1970’s.

The schism in the OTO has been more severe. Crowley’s recently deceased biographer Kenneth Grant believed himself to be the spiritual heir to the organisation. His nine part Typhonian Trilogy (three sets of three books) and activities with the Lovecraft influenced Nu-Isis Lodge resulted in his expulsion from the order, taking many Crowleyites with him. Grant’s star continues to rise on the occult firmament and his notion of ‘tangential tantrums’ may shed some light on the activities of Hubbard and Parsons.

His books relate the details of a number of unplanned results from carefully prepared magical operations. It is as if combined ritual activity performed by men and women of focused ‘will’ must inevitably alert the attention of, previously unknown, hands and eyes, who then direct the energies created by the procedure to an area unimaginable to the human mind; a place outside of the circles of time.

Even now, thanks to the pioneering work of those great American scientists, Jack and Ron, Babalon may be just beginning to lift her skirts at the edge of our consciousness.

You may think these strangely connected cults are just the left-over dream larvae of a bunch of ego-driven fabulists, branded by the cult of personality. ‘Saint’ Ron, born to save humanity Vs the devil worshipping Aleister, born to destroy the tyranny of the mundane.

However you look at it both parties still have a solid presence in the ‘real world’, although Scientology training will cost you a pretty penny and may result in you being labelled as a Suppressive if you disagree with Church policy. The Book of The Law, on the other hand, is available at a reasonable price from the OTO and many fine bookshops.

One further irony: according to Russell Miller’s book Bare Faced Messiah, the last years of Hubbard’s life saw him deposed as leader and reduced to a figurehead in a de facto coup, led by young scientologists who had actually been born into the cult. Their argument being that even though Ron was a genius he could never actually be a ‘true’ scientologist as he hadn’t been subject to Church training until after adulthood.

Unlike Crowley, Ron had no answer to premature redundancy and died in a prison of his own making.

Next Story:
The ‘Buffy Effect’ and Violent Media