I like the stars. It’s the illusion of permanence…

I think. I mean, they’re always flaring up and caving in and going out. But from here, I can pretend…I can pretend that things last. I can pretend that lives last longer than moments. Gods come, and gods go. Mortals flicker and flash and fade. Worlds don’t last; and stars and galaxies are transient, fleeting things that twinkle like fireflies and vanish into cold and dust. But I can pretend…”

In Trebuchet 6: Time and Space we reflected on the work of painter Mark Batty, whose celestial focus recognises humans by offering a view of the cosmos that we wouldn’t normally see and yet humbles us by suggesting that our earth-centric view is just one of infinite possibilities. The optimism within the work occurs regardless of the viewer’s choice and following Descartes we exist because we are able to reflect on our position. The view from our position in space is special because there is someone here looking. The Earth is special because of us and thus we are special (flaws and all) because we make things special. Yes, it’s a horribly festive tautology but so is the existence of a supreme being to which many of us acquiesce because it’s what you do, and polite, and because we just want to get back to drinking religiously. I’m not referencing religious drinking as being on your knees in front of a frocked Catholic rather as a Winter sacrament that eases the chill of regret, and causes you to nod sagely as you avoid the barbed political bait laid out by your earnest cousins across the festival spread. In the end, we should accept we all see things as we’re going to see them and commune with the higher infinite before one of us sees stars.

Usually it is not in our stars that we are at fault but in our expression. The theft of Sparta’s Helen hardly gets a mention but her face… blimey. A glancing blow indeed. But back to the stars, as Neil Gaiman (a national treasure who truly has risen above a given name that would cripple a weaker specimen) has pointed out, the illusion of permanence is somehow comforting and allows us contingent strategies that chart our futures as seen from the present. These symbolic dreams of logic and desire we should recognise as being transient, subject to course correct, a tool to get us through, but still a pole star that enables the navigation of the self by the ego through the darkness of chance.

“My current series focuses on star cloud regions cropped from along the Milky Way arm using the ESO’s panorama as a focal map. The works are painted in a realistic style, producing a natural representation of the cosmos, however due to the nature of space, the result can often seem free of reference and subject matter, blurring the line between representation and abstraction. I aim to present the viewer with a universe that is both overwhelming and within our grasp; the digitally created map will allow the viewer to embark upon their own journey through our galaxy” 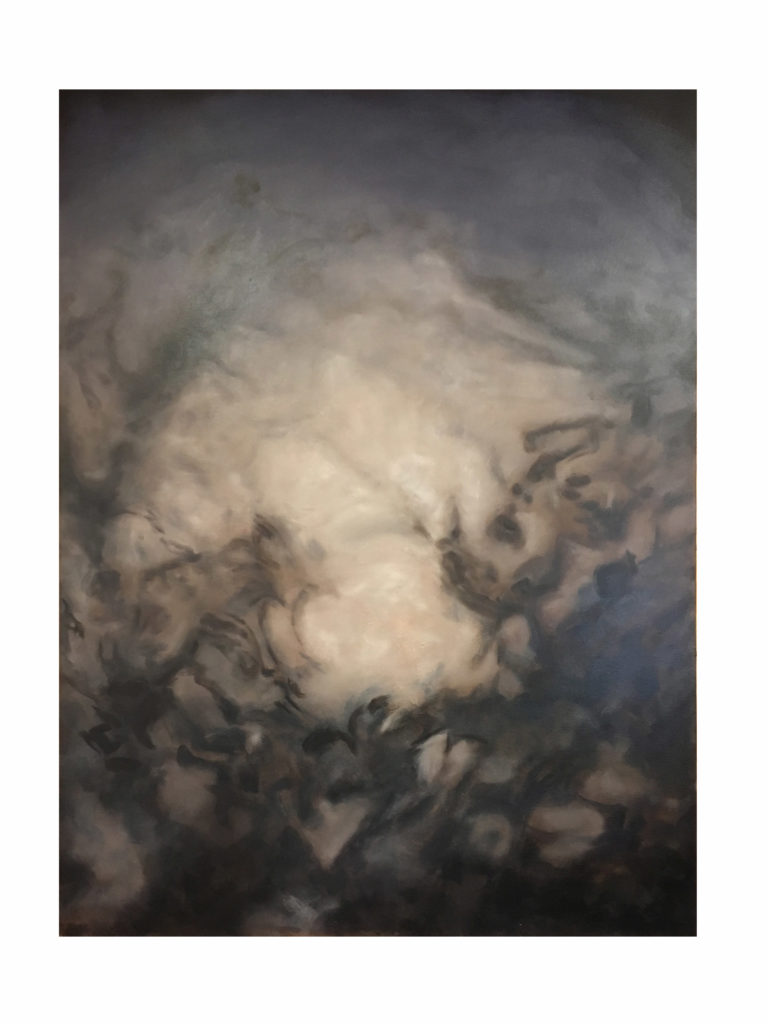 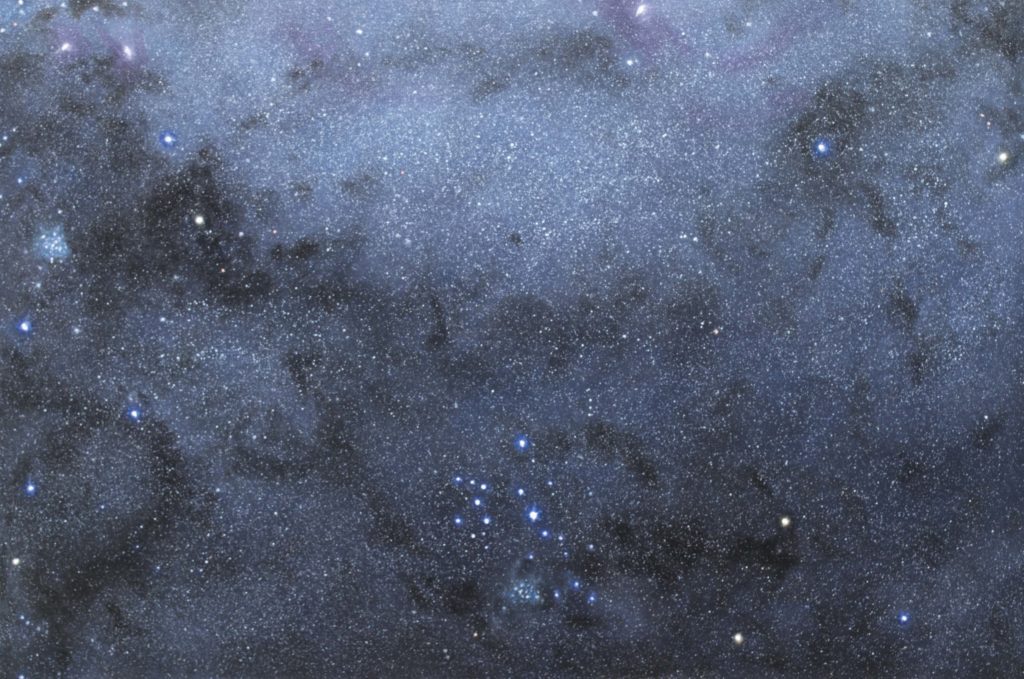 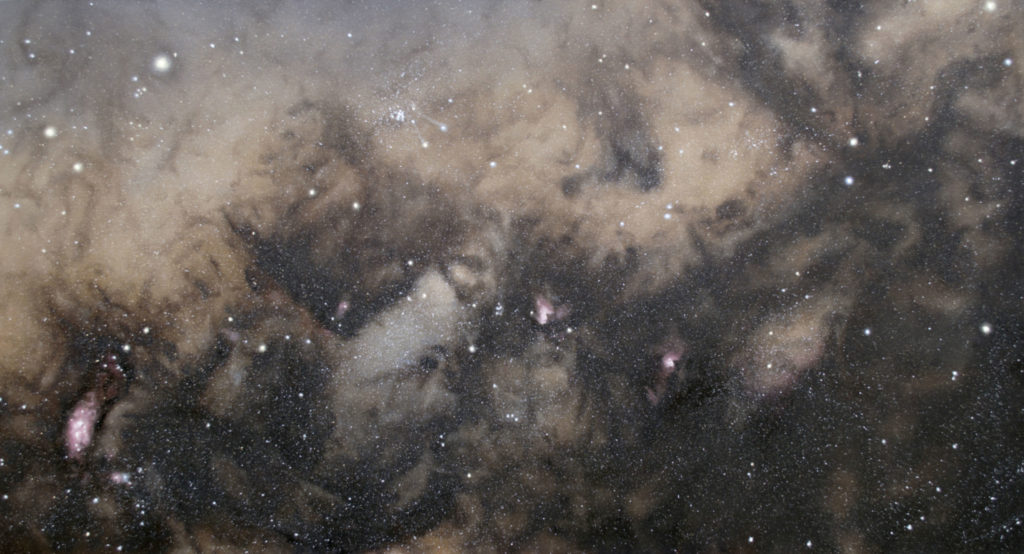 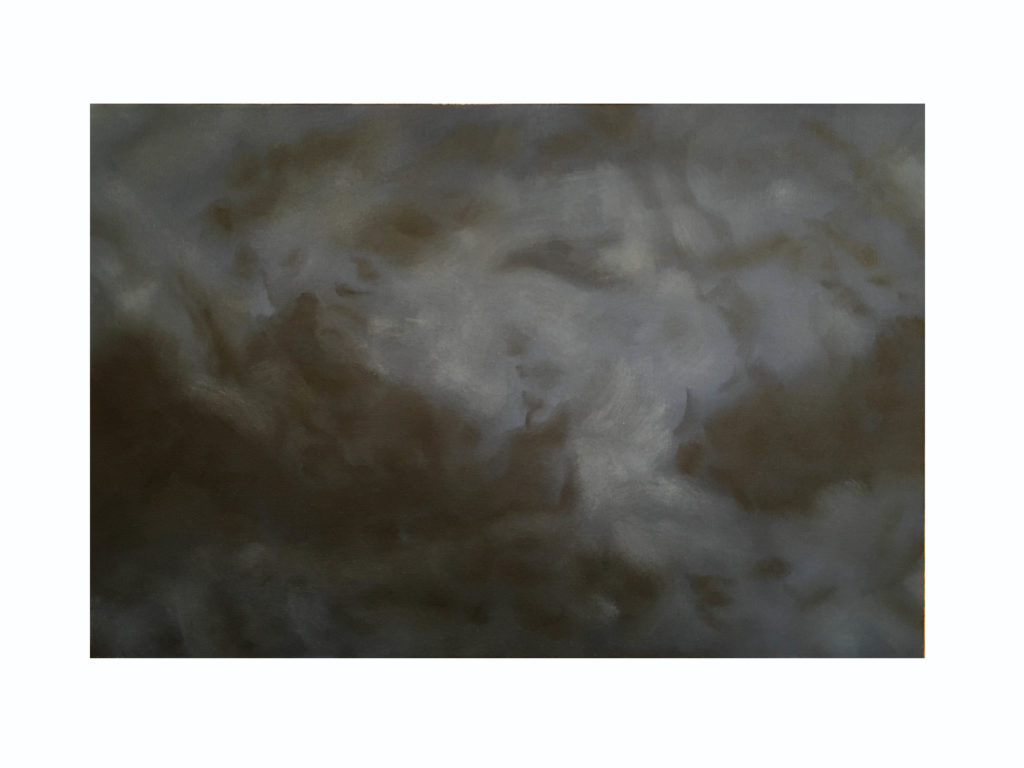 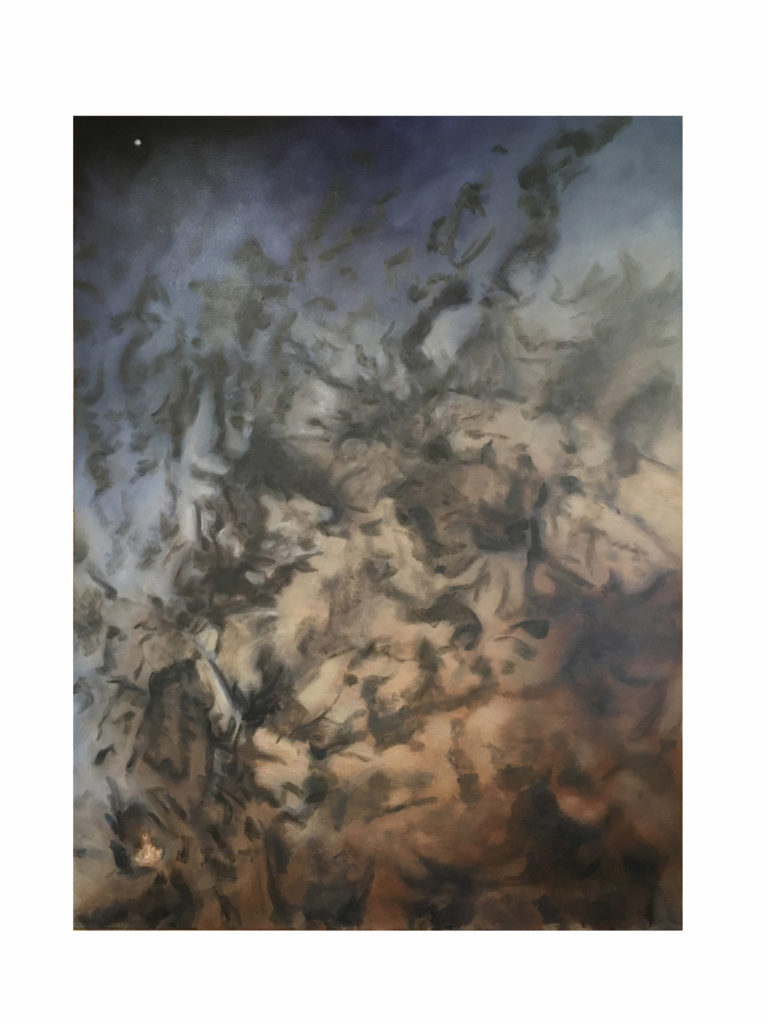 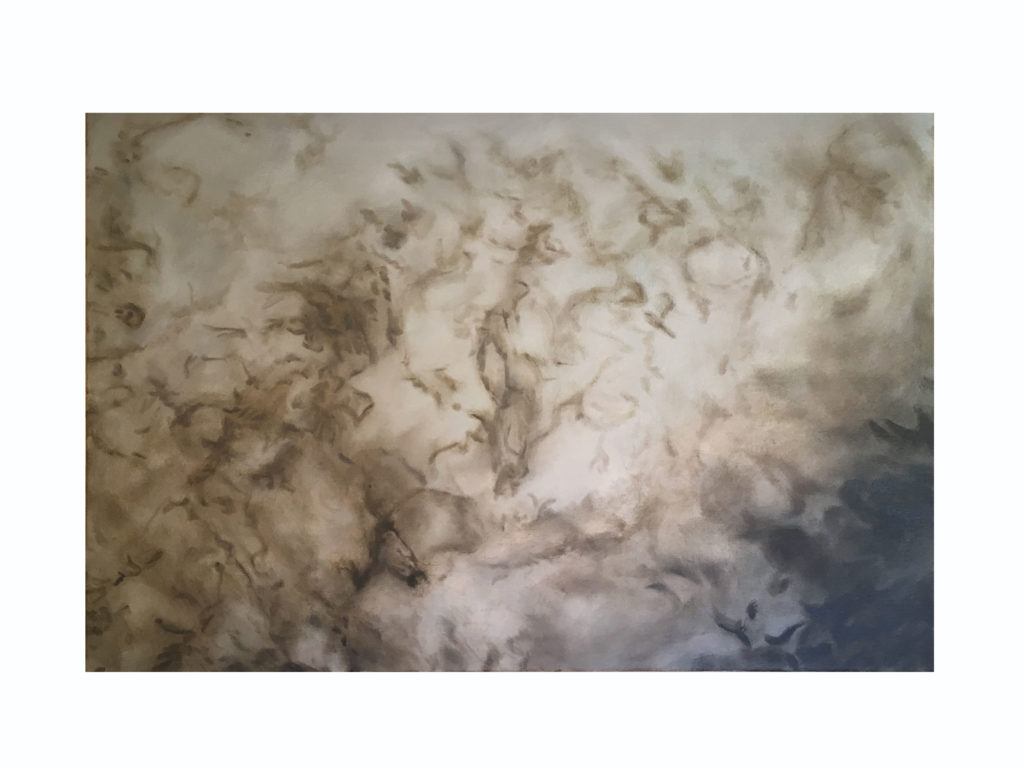 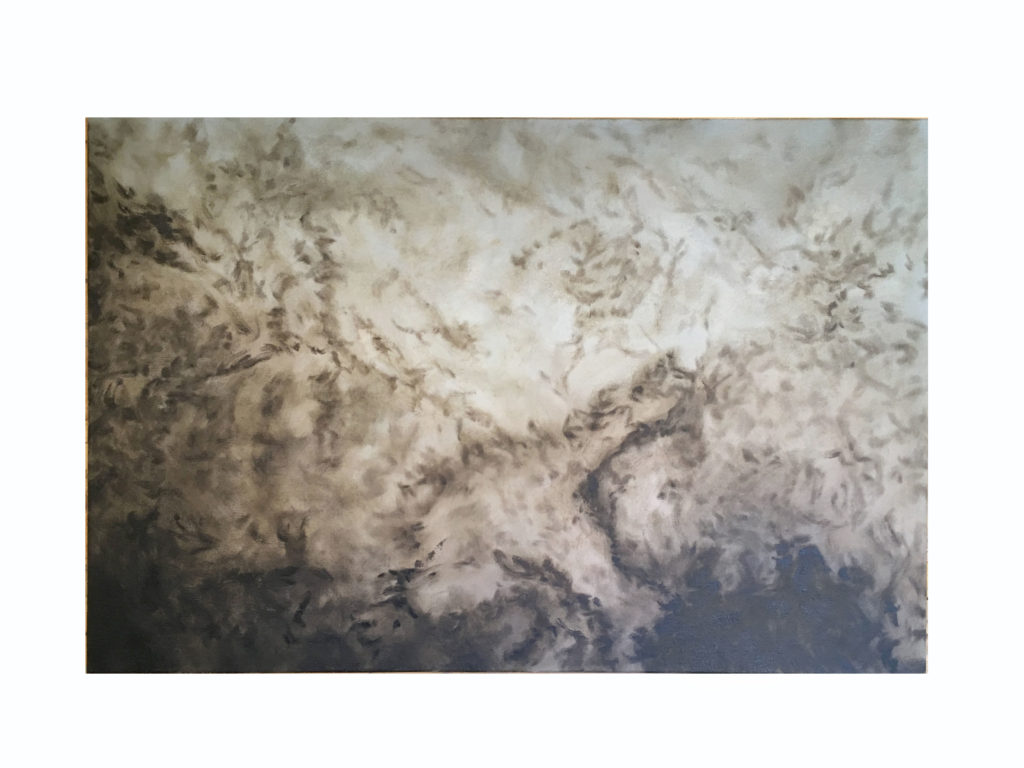 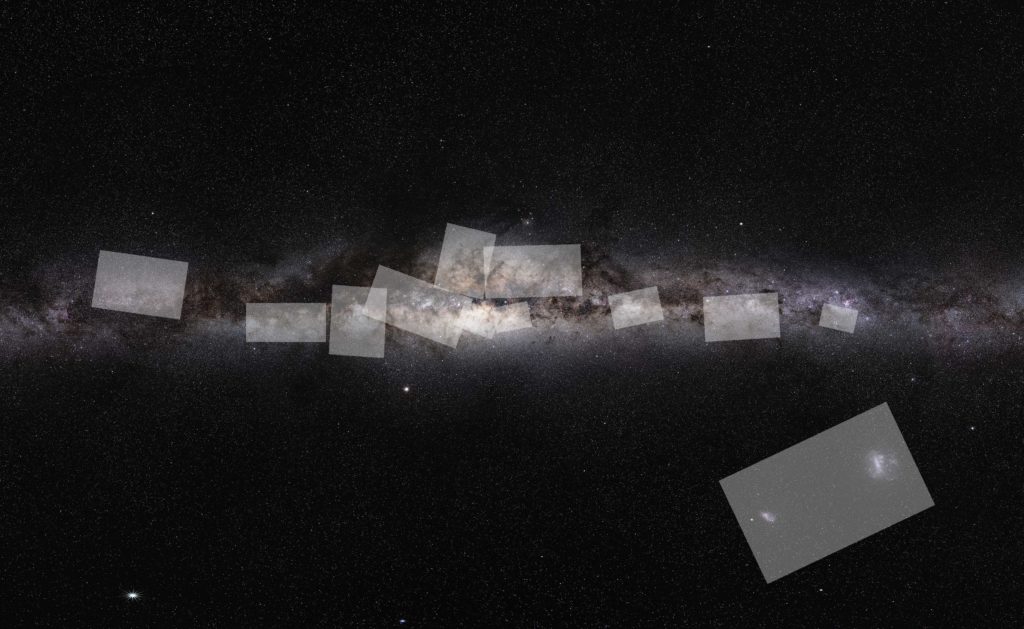 Notes on image above: This magnificent 360-degree panoramic image, covering the entire southern and northern celestial sphere, reveals the cosmic landscape that surrounds our tiny blue planet. This gorgeous starscape serves as the first of three extremely high-resolution images featured in the GigaGalaxy Zoom project, launched by ESO within the framework of the International Year of Astronomy 2009 (IYA2009).

The plane of our Milky Way Galaxy, which we see edge-on from our perspective on Earth, cuts a luminous swath across the image. The projection used in GigaGalaxy Zoom place the viewer in front of our Galaxy with the Galactic Plane running horizontally through the image — almost as if we were looking at the Milky Way from the outside. From this vantage point, the general components of our spiral galaxy come clearly into view, including its disc, marbled with both dark and glowing nebulae, which harbours bright, young stars, as well as the Galaxy’s central bulge and its satellite galaxies. As filming extended over several months, objects from the Solar System came and went through the star fields, with bright planets such as Venus and Jupiter.