And don’t kites just lend themselves to metaphor? They punctuate the sky, return it to a human scale. They hug the wind. Our minds can’t help but follow them up into the empyrean; watching them, we expand.

[dropcap style=”font-size:100px; color:#992211;”]D[/dropcap]uring a spell of sunny weather (remember that?) I turned out a kite, a forgotten gift, from the bottom of a cupboard.

What could be a finer way to spend an afternoon? I took off to Port Meadow, a golden sea of buttercups, and indulged myself.

Like so many kids growing up in the 70s, I once had a Peter Powell dual control stunt kite (Peter Powell, if memory serves, was a Devon man too). I had plenty of fun with it, at least when not crashing it to the ground in a tangle of tears and string and broken spars, but these days power kites, as they have been renamed, have little appeal.

Power kites are all about control, or perhaps, the illusion of control. I sometimes watch people flying them on the meadow but whether the wind is so strong that they’re nearly blown off their feet, or so flukey that the kite crumples and refuses to play, there doesn’t seem to be an awful lot of skill in it.

They always seem to stand in inappropriate places, in the lea of trees or buildings, where the wind shadow is long, yanking the lines this way and that, trying to bend the kite and the wind to their will. Rarely do they succeed. There’s not much listening going on (though granted kite-surfing is another matter).

[quote]Relinquish any idea of control[/quote]
No, for me, it’s the single-line kite that does it. Admittedly, the nylon sled-kite I retrieved from my cupboard doesn’t take a whole lot of skill either – it pretty much flies itself – but you still have to play out the line when the gusts come, and draw it in again when they recede. You have to feel the wind. But there are single-string kites that you can learn to move up and down or left and right. All require skill, yes, but also a kind of zen, a letting go. Relinquish any idea of control and the kite rises. Oh the metaphor! 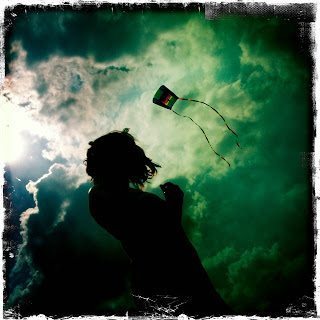 And don’t kites just lend themselves to metaphor? They punctuate the sky, return it to a human scale. They hug the wind. Our minds can’t help but follow them up into the empyrean; watching them, we expand. As with the wind, we animate them, for they move like creatures. They tug and pull against their earthly bonds, yearning for freedom, but only death would follow their release.

Kites delight so no wonder restrictive cultures have, at times, banned them. Imagine what would happen if we all bunked off work for the afternoon and went kite-flying instead?

The next time someone barks at me to ‘go fly a kite’ I shall receive it as a benediction.

Next Story:
Smoking may worsen hangover after heavy drinking

One Reply to “Go Fly a Kite”