Paint, or a rudimentary version of it, was landed upon tens of thousands of years ago as a basic tool for mark-making. What else is there for Gerhard Richter to say? 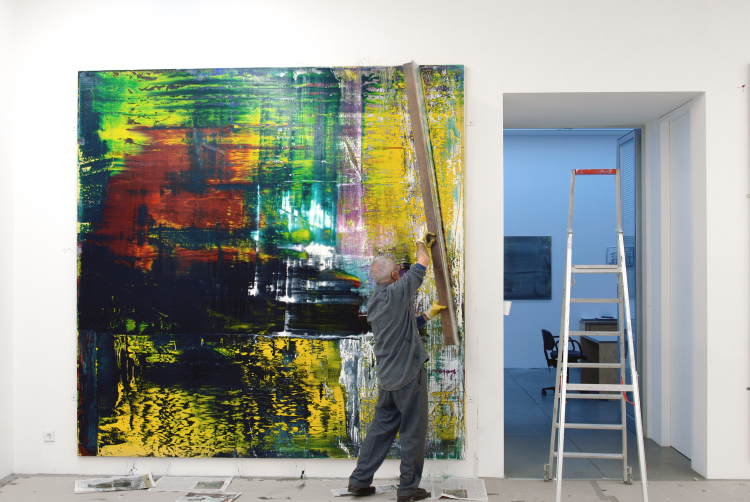 Upon seeing the earliest daguerreotypes around 1840, the French painter Paul Delaroche reportedly announced: “From today, painting is dead.”

Whether or not this melodramatic statement is based on truth, the ‘life or death’ struggle between painting and photography provided a lasting framework for contemporary art discourse. In the event, painting didn’t die; it adapted and flourished. The founding of photography initiated new perspectives on image-making; most significantly, challenging traditional ‘painterly’ notions of composition, singularity, originality and stability.

Paint, or a rudimentary version of it, was landed upon tens of thousands of years ago as a basic tool for mark-making. Colours were initially created by grinding rocks, earth, bone, and minerals, and later by mixing elements through elaborate and often dangerous processes (in ancient Greece and Egypt, for example, a vibrant shade of red was produced from a toxic concoction of mercury and sulphur). Evolving from the narrative works of early cavemen, the potential of painting rapidly expanded into different forms of representation that were neatly categorised into a hierarchy of classical genres — still life, landscape, portraiture and history painting — which today’s painters continue to disrupt and complicate.

With a career spanning six decades, Gerhard Richter is one of the world’s most prolific and best-known contemporary painters, but what’s most intriguing is his ongoing and conflicting relationship with his primary material. Paint, for Richter, is as much a tool for mark-making as it is for obscuration and erasure. “He addresses modern and conceptual objections to painting by absorbing into the medium the very terms of its rejection,” writes Dietmar Elger (2009). The trait is most apparent in the artist’s early monochromatic paintings (see Pedestrians (1963) and Mrs Marlow (1964)), which borrow the casual composition and blurred contours of ‘snapshot’ style photography, whilst at the same time emphasising the precarity of paint as a material that is applied by hand and therefore, is not only reliant on the artist’s gestures and technical ability, but also subject to an element of whim or chance.

This is also where the squeegee comes in. Typically comprising a wooden handle with a length of flexible perspex, and used to etch, scrape or smear existing paint or to apply new wet paint to a still-wet surface, Richter uses his squeegee to undo or disturb his own making. The extent to which he employs it varies, and is often shown through a repetitive series of works. In two series of paintings entitled S. with Child (1995), for example, the image of Sabine (Richter’s then wife) holding his son Moritz is only slightly blurred by the effect, whilst in two more from the same series the figures are fragmented to the point of complete obliteration. Presented together, as they were in the artist’s recent Met Breuer exhibition, the process of ‘unmaking’ is made strikingly visible as the figures are smothered, rather than revealed as in conventional portraiture, by the layered application of paint. As such, these palimpsest surfaces enact and convey to the viewer a very literal as well as psychological experience of loss.

“Through gestures that simultaneously erase and complete the image, the painting attempts a pictorial equilibrium, holding in tension both the formal polarities of abstraction and representation and the oppositional forces of destruction and reconstruction,” writes Sheena Wagstaff (2020) of Richter’s painting September (2005) which abstracts a photograph documenting the precise moment of explosive impact on 9/11. In this work (as with the S. with Child paintings), the grey, squeegee-rendered fog serves to draw our attention to the destruction of the towers’ apparent solidity, and so we become voyeurs straining to see, as if through gauze stretched across a pane of glass.This effect has previously been likened to the literary metaphor of memory’s fog — the gradual fading of images and experiences that we absorb — and whilst this might be a useful entry point, particularly for September and Richter’s autobiographical works, it evades discussion of what’s actually there on the canvas: paint, and how it is layered and applied to create a sense of instability and continual movement. 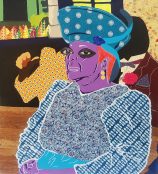