Tastes Like Chicken? Wiggly Meat and the Rise of Edible Insects

The buzz about edible bugs: Can they replace beef?

Seville orange and Campari marmalade is little more than an Instagram-age reboot of faddish 90s fusion cuisine, and the GB Bakeoff hysteria is less a reflection of the nation’s skill with flour and ovens than a Brexity group hug designed to assert the notion that there are still some activities extant in which the globe is mostly coloured pink.

The one exeption (and it is a broadcast of mighty power, integrity, rigour and intellectual heft) is the Sheila Dillon-helmed Radio 4 show The Food Programme. Trebuchet insistently recommends it.

Also, they did an episode on the rising trend of edible insect production some weeks ago, which is the rather laboured link to the news story below.

The idea of eating bugs has created a buzz lately in both foodie and international development circles as a more sustainable alternative to consuming meat and fish. Now a report appearing in ACS’ Journal of Agricultural and Food Chemistry examines how the nutrients — particularly iron — provided by grasshoppers, crickets and other insects really measures up to beef. It finds that insects could indeed fill that dietary need.

Edible bugs might sound unappetizing to many Westerners, but they’ve long been included in traditional diets in other regions of the world, which are now home to more than 2 billion people, according a report by the U.N. Food and Agriculture Organization. The report also notes that about 1,900 insect species have been documented as a food source globally. That they’re a source of protein is well established, but if the world is to turn to bugs to repla 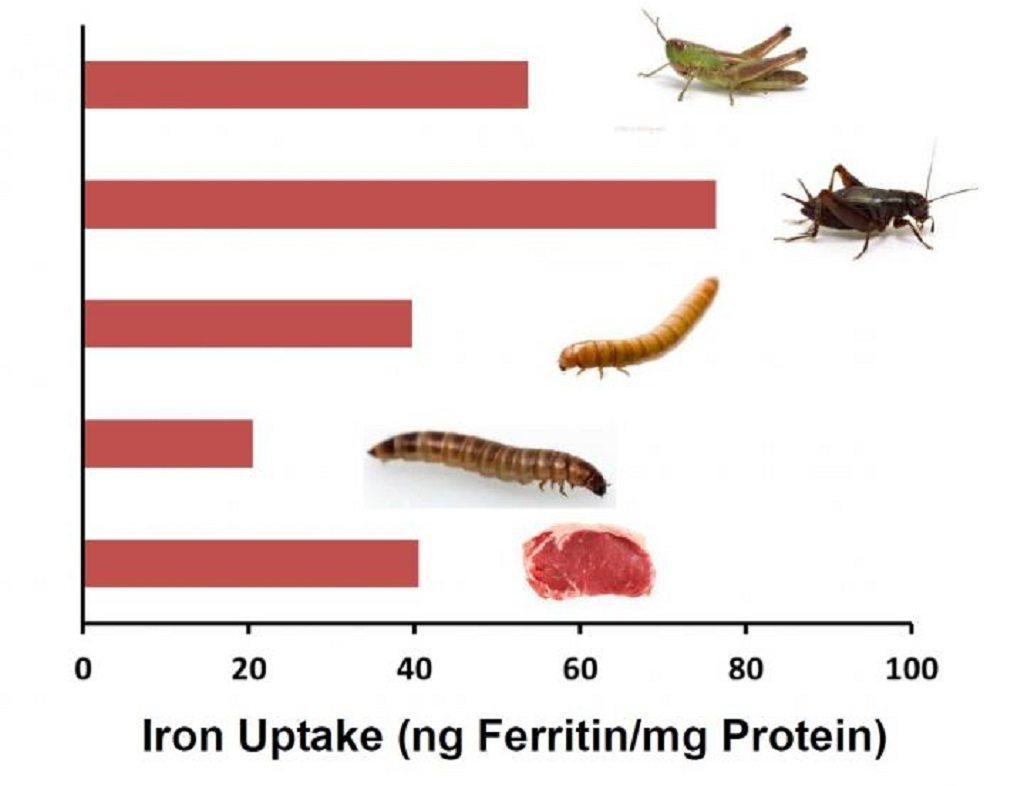 ce meat, the critters will need to offer more than protein. Iron is a particularly important nutrient that is often missing in non-meat diets, causing iron-deficiency anemia, which can lead to lower cognition, immunity, poor pregnancy outcomes and other problems. In light of these concerns, Yemisi Latunde-Dada and colleagues wanted to find out whether commonly eaten insects could contribute to a well-rounded meal.

The researchers analyzed grasshoppers, crickets, mealworms and buffalo worms for their mineral contents and estimated how much of each nutrient would likely get absorbed if eaten, using a lab model of human digestion. The insects had varying levels of iron, calcium, copper, magnesium, manganese and zinc. Crickets, for example, had higher levels of iron than the other insects did. And minerals including calcium, copper and zinc from grasshoppers, crickets and mealworms are more readily available for absorption than the same minerals from beef. The results therefore support the idea that eating bugs could potentially help meet the nutritional needs of the world’s growing population, the researchers say.

Previous Story:
Kargeras Returns From The Land of the Almost Ignored (Root)