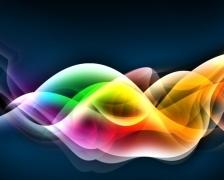 [dropcap style=”font-size:100px; color:#992211;”]A[/dropcap] warmer sea has the same sound profile as in the cretaceous era. Doubt this guy noticed…

Dinosaur-era acoustics: Global warming may give oceans the ‘sound’ of the Cretaceous

Global temperatures directly affect the acidity of the ocean, which in turn changes the acoustical properties of sea water. New research suggests that global warming may give Earth’s oceans the same hi-fi sound qualities they had more than 100 million years ago, during the Age of the Dinosaurs.

The reason for this surprising communication upgrade is that whales vocalize in the low-frequency sound range, typically less than 200 hertz, and the new research predicts that by the year 2100, global warming will acidify saltwater sufficiently to make low-frequency sound near the ocean surface travel significantly farther than it currently does — perhaps twice as far.

Rhode Island acoustician David G. Browning, lead scientist on the research team, will present his findings at the 164th meeting of the Acoustical Society of America (ASA), held Oct. 22 – 26 in Kansas City, Missouri. He explains the sea change this way: “We call it the Cretaceous acoustic effect, because ocean acidification forced by global warming appears to be leading us back to the similar ocean acoustic conditions as those that existed 110 million years ago, during the Age of Dinosaurs.”

Their work builds on the recent investigation by other researchers who analyzed historic levels of boron in seafloor sediments to reconstruct ocean acidity for the past 300 million years. Using boron’s sound absorption traits and impact on low-frequency transmission, Browning and his colleagues were able to predict the soundscape of ancient oceans to conclude that 300 million years ago, during the Paleozoic, the low frequency sound transmission in the ocean was similar to conditions today. They also found that transmission improved as the ocean became more acidic, reaching its best transmission value around 110 million years ago – allowing low frequency sound to travel twice as far.

“This knowledge is important in many ways,” notes Browning. “It impacts the design and performance prediction of sonar systems. It affects estimation of low frequency ambient noise levels in the ocean. And it’s something we have to consider to improve our understanding of the sound environment of marine mammals and the effects of human activity on that environment.”

If further work validates this model, future SCUBA divers might hear in the oceans with the same clarity as the dinosaurs.