Twelfth Night remain one of the formative bands of the early 80s neo-prog scene, and this new edition of what many consider their definitive album represents a good starting point to discover their music. 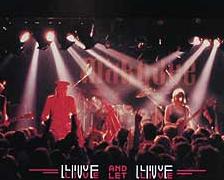 [dropcap style=”font-size:Verdana; 60px; color:#992211;”] B [/dropcap]ack in the early 1980s, The Reading-based band Twelfth Night were one of the leading lights of the so-called “Neo-prog” movement: the second wave of prog-rock bands who combined the complexity and ambition of progressive rock with the DIY ethos of punk.

While other bands such as IQ, Pendragon and especially Marillion went on to see varying degrees of success, Twelfth Night never really managed to achieve the profile their early potential hinted at. After a promising start with several self-released and indie label offerings, their eventual major label début flopped, they were rapidly and unceremoniously dropped, and the band split. Andrew Wild’s excellent book Play On chronicles their rise and fall. Far more recently the band have reformed and played quite a few prog festivals with varying lineups, but that’s another story.

1984’s Live and Let Live was one of their strongest releases. Recorded at the old Marquee Club in London at the two farewell gigs for the band’s original singer Geoff Mann, the original album was a single LP containing the highlights of the set. This new definitive edition expands this to two CDs, capturing the full two-hour show played on those nights.

Putting it together sounds like it was a painstaking labour of love; only the 45 minutes of the original LP survive as 16-track masters, the rest compiled from two-track recordings of the encores, and the audio from a VHS video of the show. Indeed, one track, ‘The Collector’ comes from a show a few days earlier, since this was a far better recording that the ones from the Marquee nights.

While the instrumentation is strongly neo-prog with an obvious debt to 70s Pink Floyd and Genesis, Geoff Mann’s sometimes theatrical vocal delivery gives them something of a post-punk edge in places. Beginning with the attention-grabbing rocker ‘The Ceiling Speaks’, the expanded album mixes the sort of lengthy multi-part epics prog-rock is known for with shorter punchier numbers that hinted at the more streamlined commercial approach they subsequently took with replacement singer Andy Sears.

The style ranges from the delicate shimmering instrumental ‘The End of the Endless Majority’ to the dark and disturbing maelstrom of ‘Creepshow’. There’s even a surviving number from their original incarnation as an all-instrumental band in ‘Afghan Red’. 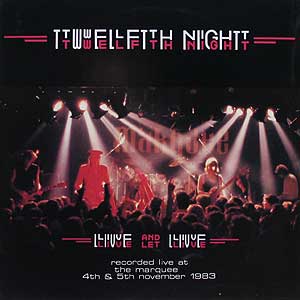 Mann’s lyrics have a strong political-personal flavour; they take you back to the Thatcher’s Britain in which they were written. But while the Cold War anti-nuclear anthem ‘Fact and Fiction’ is a reminder of the past, ‘We Are Sane’ (about how the media shapes people’s perception in the interests of the ruling elites) is even more relevant today.

‘If the thought processes of an individual can be permanently limited to a point of strict conformity to an outside source of thought, that said individual need no longer be regarded as such. The enforcement of order becomes possible for anyone with enough power to control what is projected’

The side-long (for LP days) epic ‘The Collector’ is an explicitly Christian parable that points to Mann’s post-Twelfth Night career as an Anglican priest, and is as much a showcase for Andy Revell’s fluid guitar work as for Mann’s vocals and lyrics. There’s even a bass solo at one point! But the real highlight is another long piece,’Sequences’, where Mann’s lyrics turn what had originally been the climactic set-closer from their instrumental days into the harrowing tale of an idealistic volunteer caught up in the horrors of World War One.

The original LP always was one of the high points of their all-too-brief career, and the previous single-disc CD edition has now been out of print for some time. This expanded edition is very welcome, even if the quality is a little uneven. There is a marked difference in both sound and performance quality between the songs that appeared on the original LP and some of the additional material. There are also moments that show up Mann’s limitations as a vocalist. But the inclusion of some weaker material for completeness’ sake doesn’t detract from the album’s strengths.

Twelfth Night remain one of the formative bands of the early 80s neo-prog scene, and this new edition of what many consider their definitive album represents a good starting point to discover their music.