And, like many gobby kids with a sharp wit and an audience, he gets carried away at times. ‘Picking fatties with big racks/ to lick their piss flaps/ like Johnny Vegas in drag’ flies past, sexist and puerile, but with enough humour to prompt rolled eyes and a sense of complicity. You laugh, as the truism goes, and you’re implicated. 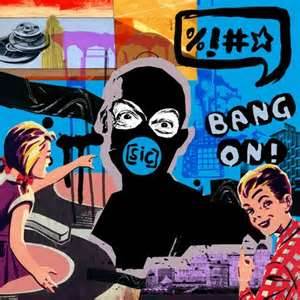 Dexterity of phrase, a wicked way with a pun and a revolting sense of black humour, Bang On‘s [Sic] brings an astute self-knowing to the otherwise bleak plains of hip-hop.

To hell with hip-hop. If there were never another hip-hop album made the cultural tapestry of the human race would suffer nothing whatsoever. Frankly, the mileu is glutted with too many variations on too few themes. Money, drugs, violence, machismo, sexual conquest. The fantasy blogs of pubescent boys provide the same subject material, often with more wit.

Just one more? Oh go on then.

Decoding and deconstructing the layers of self-reference, bravado, and typecasting that saturate the hip-hop persona is always the most crucial part of assessing an act. Most of the time it’s an unconscious process, done naturally in response to nuances and subtleties in the emcee’s patter. Essentially, as with the novelist’s art, everything depends not upon whether the character portrayed is virtuous or not, but whether we can empathise with them.

Dexterity of phrase, a wicked way with a pun and a revolting sense of black humour

For the most part, Bang On!’s Elliot Egerton presents a likeable figure, a cheeky and lancet-sharp intelligence breaking through his rapidfire flow (too rapidfire to catch everything without the lyric sheet on hand). Dexterity of phrase, a wicked way with a pun and a revolting sense of black humour typify the approach.

And, like many gobby kids with a sharp wit and an audience, he gets carried away at times. ‘Picking fatties with big racks/ to lick their piss flaps/ like Johnny Vegas in drag’ flies past, sexist and puerile, but with enough humour to prompt rolled eyes and a sense of complicity. You laugh, as the truism goes, and you’re implicated.

‘I was like the Heysel crowd, banging my head against the wall’ is less easily consigned to the naughty-but-lovable file. Egerton makes it clear elsewhere that he’s from the Everton-supporting end of the city (the reference to midfielder Mikel Arteta is the clue), but sporting rivalries don’t excuse a simile referring to the 39 people crushed to death in the Liverpool-Juventus match at the Heysel stadium in 1985. Nitpicking? Pulling quotes out of context? Perhaps, but with the intention of highlighting one of only a few moments where he loses the listener’s sympathy by letting his mouth run on quicker than his better judgement.

But it happens rarely. More often the album portrays a seductively detailed portrait of a talented, ambitious grafter, who is nonetheless subject to despair, slum aspirations and frustration. Hip-hop personae are often riven with contradiction and what seem like multiple personalities. The dullest of which is the grindingly overused trope of becoming financially successful whilst still retaining the street credibility of the savvy underclass. Yawn. Eggerton weaves the contradictions of his life so neatly into his lyrics that there is no incongruity whatsoever, and the result is a realism that is utterly convincing.

For all that ‘hip-hop producer’ is top of the MTV Cribs aspiration list for the swathes of slavering kids with dollarsigns obscuring a clear vision of their own talents, the simple fact is that, in most cases, the producer’s job now is to do little more than apply a flavoursome underbed to the vocal. A soundbed that manages to be notable enough to slot into this month’s definition of contemporary, without being notable enough to actually draw attention from the lyrics being delivered on top.

Some would say the opposite, and point to the Beverly Hills superproducers whose records shift millions despite the interchangeability of the Canon-fodder (or Minolta, or Nikon) that looks pretty and spits the rhymes out front. Either way, the point is that the approach is modular. The insulting hack job Jamie XX made of remixing (mostly erasing) Gil Scott-Heron‘s already hopelessly-produced I’m New Here is an ideal example of the phenomenon.

the familiar wobbles of dubstep are, whilst aptly bleak and narcotic, entirely disposable

So Bang On!’s underpinning of Egerton’s ferociously rapid flow with the familiar wobbles of dubstep are, whilst aptly bleak and narcotic, entirely disposable. In effect, they’re largely unnecessary. The huge impact of opening track ‘Teeth’ is largely created by the barely-competent overdriven guitar dirge that supports it. The percussion track on ‘MUNNYS’ gets far more interesting when it morphs into a semi-liquid d ‘n’ b affair. It doesn’t matter, it’s Egerton as emcee who is the star.

Certainly, he lays it on thick. The whinging scouser is as much a part of Britain’s imagined cultural heritage as the psychotic Glasweigan or the stolid Brum. Big Dada’s press materials are at pains to announce that this is ‘a very different Liverpool to the chirp-scouse tradition established by The Beatles and paid loving homage to by successive generations of Mersey-based musicians’.

Which would be almost right if it weren’t that it’s completely wrong. The Beatles’ ‘Lady Madonna’ established the very tradition that Bang On contributes to here: ‘who finds the money, when you pay the rent? Did you think that money was heaven sent?’. Dropped into a continuum of gobby Liverpudlian lads carving music out of the dubious muse of dole queues, cigarettes, spliffs, slags, booze, poverty and politics, Eggerton has the presence of mind and self-awareness to even title the final track ‘The Whinge’.

And it’s that self-aware, tongue-in-cheek, deeply-flawed-but-trying aspect of Bang On! that is so seductive, so compelling and, dammit, so dangerous. Even the album title ‘Sic’ demonstrates the lucidity of Eggerton’s grasp of language, of multiple meaning, of interpretation.

Battering out thickly-accented, expletive-strewn homilies on police brutality over dubstep wobbles is nothing new, but twisting the perspective around in ‘Fars Your Whop’ to acknowledge ‘these snot nosed kids trying to tease police/ thinking breaching the peace is a beast’ brings something altogether more interesting to the persona he creates on [Sic].

That unashamed, unapologetic voice is bolstered by an acceptance that it often deserves what it gets: ‘I fiddle the dole but before long they’re gonna clock it’; or that it’s not lack of ambition or opportunity that holds him back, but simple lazy routine:

So in the creation and maintenance of empathy, Egerton is a master. Initially it seems that it’s despite his constant self-contradiction. In fact it’s precisely because of it that we identify with, and end up cheering for, this scattered and confused persona that is so much closer to a realistic portrayal of an individual than a more singular and fixed personality could ever be.

In the brilliantly-titled ‘Your Gay’ (a meta-pun working off the album’s equally clever title) the Sid the Sexist-derived homophobe protagonist gets the full brunt of Egerton’s scorn: ‘I don’t give a shit about nothing I just drink smoke and fight/ And hope that I might take a bird home tonight’, and it’s abundantly clear that there’s a distinction between that and the obligatory hip-hop swagger of ‘Punk-Donk’: ‘

Is it humour, or a careful layering of knowing irony, multiple narrative voices and contradictory micro-realism with no attempt made to hide those moments of frustration when right-thinking takes second place to comfort-hating? Either way, it’s an expression of a very intelligent lucidity that doesn’t get voiced in popular culture very often. And it’s bloody difficult to describe in print.

It’s a challenge to home in on exactly what is the quality that makes Egerton so appealing, despite his subject material being so frequently sordid. The answer is stocism and self-awareness. Where his contemporaries react to the privations of 21st century urban youth alienation with a scattergun apportion of blame, Bang On! wallows indulgently in the admitted knowledge that a good chunk of the impediments to his self-defined success are self-imposed, whether it be through the ambition-sapping effects of recreational drugs(‘biggest bitchin’ bags/ of green/ that you’ve ever seen), alcohol (‘there’s a drink, gimme it then go’) or the simple process of settling for a life free from unrealistic expectations (‘I just wanna smoke a twenties/ eat a bowl of shreddies/ have a wank and go to sleep’).

Themes all well-plumbed by the likes of Spacemen 3 and even the between-songs interludes on Frankie Goes to Hollywood albums, but applied here with an obsidian edge and diamond clarity. A clarity that neatly sidesteps the victimised adolescent cushion that renders irrelevant and laughable a resounding majority of hip-hop.

Pulling quotes out of a huge lyrical mass does no justice to the album, Egerton’s tone and delivery does as much semiotic coding as his lyrics, and works at least as hard. There’s too much album, too much complexity to even come close to expressing it in isolated snippets, but verse two of ‘The Whinge’ is too tempting to leave out:

See I know nobody likes workin’
but most bosses seem quite certain
I’m not the right person
for the post which I applied, in turn implying I’m worse than
the bird serving me cheeseburger that couldn’t seem to prepare mine without gherkins

Released 14th May on http://www.bigdada.com