The Anthropocene Era: Setting it in Stone

Rocks that tell our industrial history

Nevertheless, rocks do come in different ages, and can tell us different things. The gneiss of Northwest Scotland, for example, contains no fossils because when it was formed (and it was formed in what is now Antartica), life hadn’t yet evolved on Earth.

Whereas the sedimentary rock deposits of the Nervion river at Bilbao are much more recent, and show evidence of human post-industrial crud. Charming.

“Because certain geological events record everything, studying them helps to reconstruct the environmental past and to determine how human beings have influenced the environment. They will even be able to offer valuable information to tackle possible effects of climate change,” asserted Nikole Arrieta, author of the study analysing beachrocks. They are rock formations that are produced in intertidal areas, normally in tropical and sub-tropical zones. Despite that, they can also be found on the Biscay coast.

The beachrocks studied are recent formations located on the right bank of the Nerbioi-Ibaizabal estuary where they have been severely affected by human activity. “Their presence in temperate latitudes like ours is rare, there are 8-10 cases all over the world,” added Arrieta. These sedimentary formations are produced by the intergranular precipitation of carbonate cements (CaCO3). “A cement has formed between the various sediments. So the sand, instead of being loose as on normal beaches, forms these rocks,” explained Arrieta.

Yet even though the cements that the beachrocks are made up of are carbonates, the geological formations on our coast also have ferruginous cements. The slag trapped in the cemented blocks has undergone dissolution processes as a result of meteorization or atmospheric events, such as acid rain, and has even re-precipitated in the pores as insoluble iron salts.

The research carried out in the work published focussed on the characterisation of these cements. Firstly, to study the types of cements, innovative spectroscopic techniques were applied and which allowed the various mineral phases to be thoroughly analysed. “On a microscopic scale various layers of cement appear, and each one provides information on the moment when they precipitated, the conditions that existed, etc.”

Secondly, they analysed the materials trapped in these cements where “we found foundry slag from the industrial revolution, even waste bearing the seals of European companies that used to dump their slag when they arrived with their vessels. That is why we can find the so-called technofossils or traces of human activity on the beaches, in this case the industrial waste of international companies which helps to calculate the age of the beachrock”. 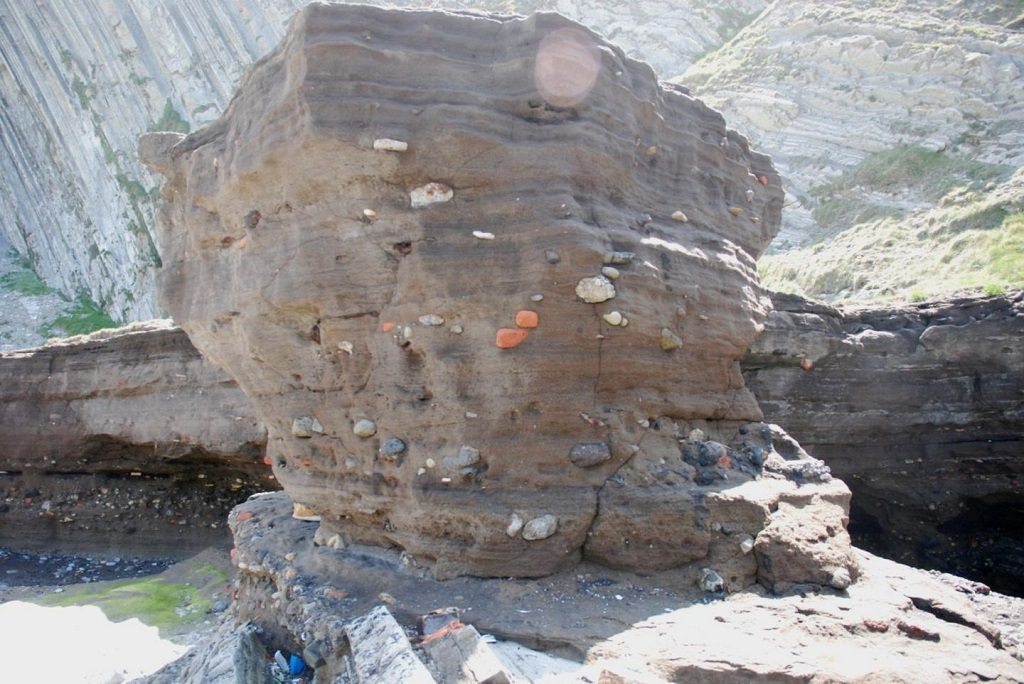 Evidence of the Anthropocene

All this would constitute an example of the geological record of the Anthropocene epoch, currently being discussed among specialists across the world. And the fact is that according to the scientific supporters of this name, the Earth is in a new geological epoch, “the era of the human being”, since human action is leading to major changes that are leaving their mark on the Earth’s geological strata. Its detractors, by contrast, argue that it is a political rather than a scientific question. This geological era would include the most recent period of the Quaternary, and right now is of great interest for specialists all over the world. “The strata of the Tunelboka, a cove located on the right bank of the estuary which is the focus of the research, have been discussed across the world with a view to offering evidence of the Anthropocene,” said Arrieta. And besides the fact that there are very few locations in the world in temperate latitudes that display this event, “there are even fewer that display the characteristics of ours; the quantity of slag they contain is mind-boggling. I have collaborated with various researchers of recognised prestige at universities in the United States and Australia, and they are all fascinated when they see the photos or materials of the location”.

Nikole Arrieta, the author of the study, says “we have to keep alive the research into this geological event that is so special and unique and which we have on our coasts, for the geochemical, environmental and historical interest of these formations, their applications in the fields of engineering and restoration, their importance in defining the recent Anthropocene epoch and, why not, the industrial archaeological interest of the materials that form them”.