[dropcap style=”font-size:100px; color:#992211;”]W[/dropcap]hilst many of us outside of the United States would consider ‘nutters with automatic weaponry’ to be a likely category in the top ten of American fears, in reality, it doesn’t even figure.

A look at the stats for US mortality causes shows that there’s logic to that. A US citizen is markedly more at risk of dying from prescription opiates (often taken for chronic conditions which aren’t adequately covered by the user’s healthcare plan) than by a random bullet. Which might explain why Trumpcare is in second place on the fears list.

Chapman University recently completed its fourth annual Chapman University Survey of American Fears (2017). The survey asked respondents about 80 different fears across a broad range of categories including fears about the government, the environment, terrorism, health, natural disasters, and finances, as well as fears of public speaking, spiders, heights, ghosts and many other personal anxieties.

In addition to the set of fears examined in previous waves, the survey team took a closer look at one particular fear-related phenomena: fear of extremism.

In its fourth year, the annual Chapman University Survey of American Fears included more than 1,207 adult participants from across the nation and all walks of life that is a direct slice of the American population according to census data. The 2017 survey data is organized into four basic categories: personal fears, natural disasters, paranormal fears, and fear of extremism. 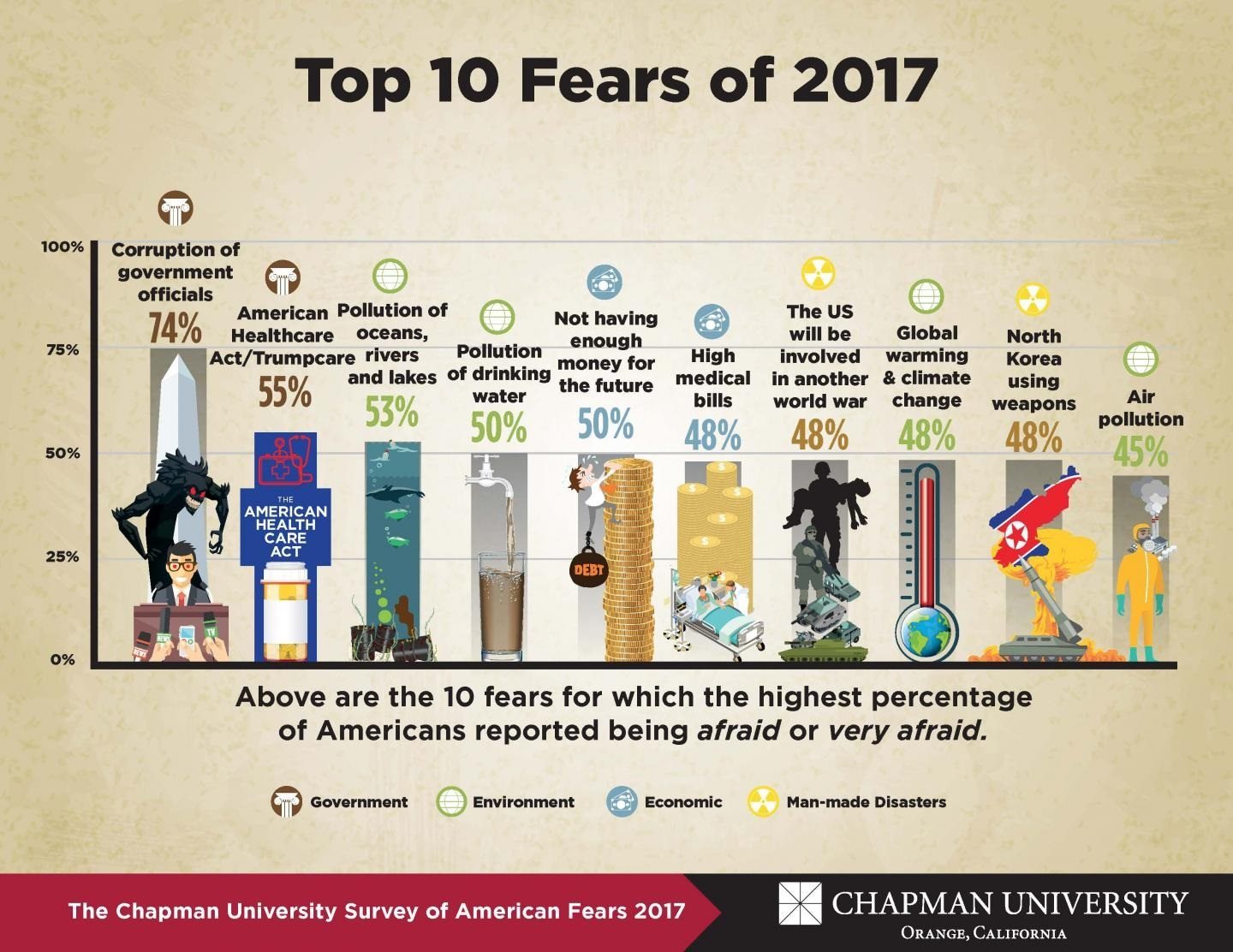 The 2017 survey shows that the top 10 things Americans fear the most are:

“The 2017 survey data shows us that while some of the top fears have remained, there has also been a pronounced shift to environmental fears,” said Christopher Bader, Ph.D., professor of sociology at Chapman University, who led the team effort. “We are beginning to see trends that people tend to fear what they are exposed to in the media. Many of the top 10 fears this year can be directly correlated to the top media stories of the past year.”

The fact that water pollution has become such a prominent fear in 2017 may be traced to the reversal of environmental policies of the Obama Administration.

Fear of Extremism and the Threat to National Security 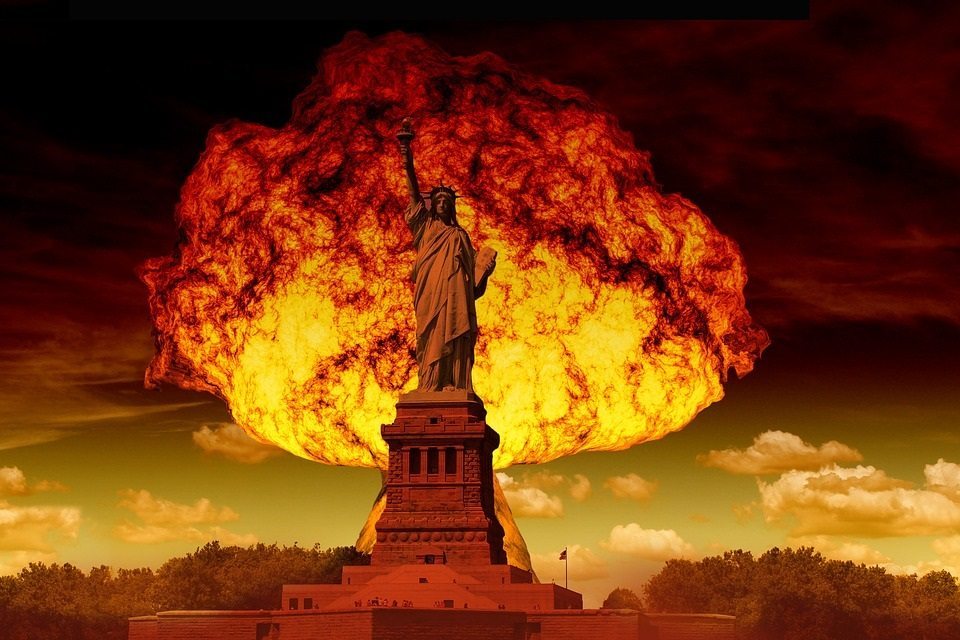 While other types of extremist groups are a concern to large groups of Americans, only those two were identified by a majority of survey respondents. Roughly one-third of Americans identify the following four as threats: Extreme Anti-Immigration groups, the Militia/Patriot Movement, Left-Wing Revolutionaries, and Extreme Anti-Abortion groups. One in five Americans is afraid Extreme Environmentalists are a threat. “Although the trend isn’t perfect, as a general rule, Americans are more afraid of extremist groups that have been discussed in the media,” said Ed Day, Ph.D., chair of Chapman’s sociology department. “Further, differences between various factions across America on which group represents the greatest threat reflects the political divisions we see in America on other issues.”

This fear affects the daily lives of Americans and even leads some to question the value of American freedom?29 percent of Americans report being very afraid or afraid of being a victim of hate crime. One-third agree or strongly agree with the statement, “In order to curb terrorism in this country, it will be necessary to give up some civil liberties.” Even more, 35 percent, disagree or strongly disagree with the statement, “We should preserve our freedoms even if it increases the risk of terrorism.” As has been seen before, elevated fears over national security can lead to lower support for national values.

The survey asked Americans about fears of man-made disasters, such as a nuclear melt-down, and nuclear and terror attacks, as well as natural disasters. The survey then asked about their familiarity with safety and preparedness advice/slogans propagated by ready.gov and emergency.cdc.gov

“The survey also showed that it’s the obsolete, even dangerous, cold war slogan “Duck and Cover” that is familiar to 70 percent of all Americans, said Ann Gordon, Ph.D., director of Chapman University’s Henley Lab. “Americans need to unlearn ‘Duck and Cover’ and replace it with ‘Get inside. Stay Inside. Stay Tuned’.”

The majority of Americans, 82 percent are familiar with the slogan, “If you see something, say something.” However, most Americans are unaware of what constitutes suspicious behavior that should be reported. The fear of being the victim of a mass or random shooting is on the minds of 31 percent, and 35 percent report being familiar with the advice to “Run. Hide. Fight,” which is the recommended preparedness slogan for a mass or random shooting.

“Whether they’re afraid of an attack by North Korea, a pandemic (which 36 percent of Americans fear), or a natural disaster, Americans just aren’t prepared,” says Dr. Gordon. “Sheltering in place requires some preparation, such as food water, and medicine. Only 34 percent of Americans have such preparations, although 45 percent say they are familiar with the advice to “Prepare. Plan. Stay informed.” And in any disaster a battery powered radio is essential to staying informed. This would be a great step towards preparedness for American households.”

The 2017 Chapman University Survey of American Fears includes a battery of items on paranormal beliefs. Currently the most common paranormal belief in the United States is that ancient, advanced civilizations, such as Atlantis once exited with more than half of respondents (55 percent) agreeing or strongly agreeing with this statement. Slightly more than half (52 percent) believe that places can be haunted by spirits. More than a third (35 percent) believe that that aliens visited Earth in our ancient past and more than a fourth believe aliens have come to Earth in modern times (26 percent). Americans are the most skeptical about Bigfoot, with only 16 percent of Americans expressing belief in its existence. “The survey shows that paranormal beliefs are quite common in the United States by examining how many such beliefs a person holds,” said Dr. Bader. “Using the seven paranormal items included on the survey, we find that only a fourth of Americans (25.3 percent) do not hold any of these seven beliefs. However, this means that nearly three-fourths of Americans do believe in something paranormal.”

The survey also looked at the personal characteristics that are significantly associated with higher levels of paranormal belief. Simply put, the person with the highest number of paranormal beliefs in the United States as of 2017 will tend to be a lower income, female living in a rural area in the Western states. She tends to be politically conservative and claims to be highly religious, although she actually attends religious services infrequently. She is either currently single or cohabitating with someone and reports her race as “other.”

Next Story:
How do you know if you’ve never tasted it?