‘There was a strict agenda, but only in terms of designing it to being spatial and outer worldly-sounding.’ Traversable Wormhole’s Adam X talks to Codex Europa 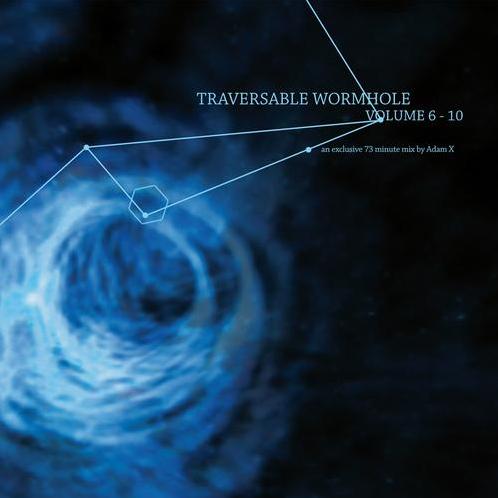 [dropcap style=”font-size:100px; color:#992211;”]A[/dropcap]dam X is a techno veteran who has returned strongly to the limelight with the space-themed Traversable Wormhole vinyl series, which has now been compiled into a second CD on CLR, accompanied by a remix EP of more industrial-oriented mixes on his own Sonic Groove label.

Codex Europa spoke to him to better understand Traversable Wormhole and the man behind it.

Could you tell us about your key influences? You’re much more closely associated with industrial/EBM than many techno producers….

My influences are across the board in music. I grew up with NYC Electro in the early to mid 80’s.  This music was very big in NYC at the time. Music like Afrika Bambatta-Planet Rock, Man Parrish-Boogie Down Bronx, Strafe- Set It Off, Kraftwerk-Numbers. I would say the mood of this music has carried over into my sound over the years.

it to being spatial

Then techno came along. The second wave in 1990 had a vast influence on my music. Especially the early releases on Warp & Network records out of the UK, early Underground Resistance and a whole lot of early Belgian techno records on labels such as R&S , Music Man, Dance Opera.

Later, at the end of 1999 I got very into industrial and EBM music from the 80s and the newer form of Industrial music called Rhythmic Noise from which first appeared in the early 90s. I became obsessed with these genres and collected thousands of records in over a two year period. This music had a vast impact on me in the last dozen years,  acts like The Klinik, Sonar, Clock DVA, Click Click, Esplendor Geometrico, Portion Control, Front 242 and many more gave much inspriation to blend harder industrial elements into techno music.

Something that very few in the techno scene were doing in the first decade of the 00s.

What’s changed since the first TW series? Have there been any technical changes to your set up? Are you following the same agenda or opening up some new themes?

Nothing had changed in the process of making Traversable Wormhole with the addition of the last releases. There was a strict agenda, but only in terms of designing it to being spatial and outer worldly-sounding. Like space itself , there is infinite territory to work with in these terms. No two songs on Traversable Wormhole sound alike, so each has it’s own theme.

Has TW now run its course or do you plan this to be a long-running series?

I still like performing live under this project and have many gigs coming up. So perhaps I will do something new every now and then. We shall see.

Can you sum up the TW approach to techno and how this differs from your other projects?

TW is the deeper, trippier sci-fi themed version of Adam X. Nothing more, nothing less.

TW seems to operate in the same cosmic/deep space techno field as the American producers Vapourspace and Jeff Mills. Is there something about American techno producers and space themes?

I don’t see a regional connection with deep space sounding music, though I will credit Detroit techno and music from Juan Atkins / UR / Dopplereffekt as having an influence on me. The bigger music influence on TW are several 1990 releases on R&S Records from Belgium such as Pulse-Catvoice, Space Opera-2001, Ravesignal.

I bought these records when they came out and they still are some of my favorite spacey techno records ever. All of which have a very unique deep space sound differing much from what was coming out of America at the time.

Do you think that there’s something specifically American about your sound? Can you hear differences to the European producers?

Not really. I rarely hear or read people comparing my music to the sound of other artists. For this reason it would be hard to pinpoint what I am doing to any geographic location. For the most part this is because my influences in electronic music are from many regions around the world.

It seems to me that your version of the “space techno” formula is colder, tenser and perhaps less optimistic. What I take from it is a sense of the indifference of the void to whoever or whatever passes through it. Here I’m thinking particularly of The Wormhole Nexus. Could you comment on this? Is coldness an important element in your work?

It’s funny, but when ever I see the word “Void” mentioned. I think of one of my all time favorite songs  ever. One that I’ve listened to since I was nine years old. It is Black Sabbath’s ‘Into The Void’. This song has some great lyrics about escaping the earth in a rocketship. It’s a very dark, bleak track. It’s a huge influence on the mood of music I have always made.

I cannot put my finger on one thing to why my music is colder and less optimistic. By no means do I set out to do make this music on pretence. I suppose it is instinctual, living in my blood. I’ve been like this before making music. I always gravitated towards colder, tenser music and movies since my childhood.

I am also reading and watching what goes on in the world on a daily basis. The prognosis is grim and grimmer in my opinion. This for sure reflects in my music as well as many personal things that have taken place in my life over the years.

Orphx have remixed one of the TW tracks – there are quite a few similarities between your techniques and backgrounds (both having released on the German industrial/rhythm and noise label, Hands Productions) What’s it like navigating between the techno and industrial scenes when there are elements of both audiences who dislike the other scene?

Hahaha! Great question. There were nights where I’d first go to an industrial event and hang out and then when the party was over head to a techno afterhour. This always left me feeling a bit like a chameleon.  I was a bit uncomfortable when first going out to Industrial/EBM events in NYC. It was a small scene and the audience was definitely not as outgoing to strangers as the people are in the techno scene.

I soon found there were a lot of politics amongst promoters and dj/artists in the scene as well. When I DJ’ed my first party in the industrial scene I felt like an outsider and word got out that I was a very well-known DJ from the techno scene. This did not sit very well with the DJ’s who were playing for years in a mostly residency-based scene.

Many also assimilated techno music with the candy raver cheese EDM scene of the USA.  I did have friends in this scene early on and in due time I was just another regular at events.  I also wound up working  quite quickly with the top labels and artists in the scene which further helped proved my crediblity in the scene as someone who was in it for purely for love of the music.

big in techno, neither

Then on the flip side was the techno scene. Many whom I knew for years on end did not understand why I did not follow everyone else into the minimal techno scene which was the hype for several years.  Many thought I was out of touch with continuing to play hard edged, dark music as this slow boring minimal techno was all the rage at techno events.

I also stuck out like a sore thumb when going to techno events as my dress style was closer to the industrial scene then the people going out to techno parties. I always wore mostly black clothing even prior to my introduction to the  industrial/ EBM scene, but now I had combat boots  and leather in the mix as I was also into the fetish aspect of the Industrial scene.

So I would often get the odd look, or comment, at techno parties from people, not only about my choice in music but also in dress.

In truth, I found there to be a lot of ignorance coming from both scenes and it still is that way now. Though Industrialized sounds have become big in techno, neither scene is really embracing the music of the other. It is unfortunate because so much of the music is relevant in both scenes. I’m sure the industrialists and technoists would love the music from the respective scenes. I am still one of the few people whom have co-organized events for both scenes in the same venue.

What’s your view of the industrial turn techno has taken in recent years, especially the tendency for some younger producers to incorporate industrial atmospheres and textures into their tracks? Does it feel like a kind of vindication?

It definitely feels great to know that after all the years of combining and pushing industrial and techno into one sound that finally we have a nice sized fanbase for this music and a lot of likeminded producers to boot. It’s a a far throw from where I was several years back when I felt like a lone man standing.

I still vividily remember the lack of bookings for myself in the techno scene at times in the mid 2000s because I would not compromise my sound.  I refused to play minimal techno which was huge at techno events. This genre of techno bored me to death. So I stuck to doing my own thing unsure if it would ever take off but committed to keep on doing it with no compromise.

So yes, I feel greatly rewarded that I stuck to my beliefs and now can be considered one of the very few originators in the cross pollenation of these genres.

What’s your view of the state of the techno nation generally? How do you see things developing?

Things are going well, but at times I am worried about the amount of new releases coming out. The market is very oversaturated with new music at the moment. There is a lot of  great stuff coming out. However on the flipside there are a lot artists hitting big with functional techno releases which works well on the dancefloor but lacks in the artistic creativity/originality department.

This breeds more copycats  looking for fame to make more functional music and not creative music.  So recently I have found myself sifting through a lot of subpar music in order to find the hi-quality releases.

As for the event/party side of things. The scene is growing nicely around the globe for industrialized techno music. More and more events are pushing harder-edged sounds around the world. So this has created a lot of nice travel moments for me in recent years.

What releases/artists are you currently most inspired by?

I am inspired by my friends who release music with me on Sonic Groove.   Orphx, Ancient Methods, Northern Structures, Diagenetic Origin, Obtane,  Dino Sabatini, Realmz, Monolith, Timothy Alexander, Henning Baer, Dasha Rush. I love what they do and all are good friends. There are some non label artists/friends to such as Perc, Milton Bradley, Sonar, Function, Developer, Monolake, TR-101 whose music I really enjoy. ­