Becoming of the Avant-Garde

Modernism and the avant-garde is the theme of the second part of Natalie Andrews exploration of the epoch and its influence on our time.

[dropcap style=”font-size:100px;color:#992211;”]I[/dropcap]n the second part of her exploration of modernism Natalie Andrews considers the forming of the avant-garde, the links between different modernisms and the development of postmodern doubt.

‘Modernism has a reputation for being a forbidding phenomenon: its visual arts disconcertingly non-representational, its literary efforts devoid of the consolations of plot and character – even its films, it’s argued, fall well short of that true desideratum: entertainment,’ Will Self, 2012 ‘Constellation of Genius, 1922: Modernism Year One by Kevin Jackson – review’ Guardian.com

As Modernism develops into the early 20th century its antagonistic character becomes more pronounced giving rise to the Avant-garde’s reputation for being difficult to appreciate or understand, this can be seen through the development of Cubism for example.

It’s easy to imagine seeing Cubism for the first time that an uninitiated spectator might see no common ground between that and impressionism which is superficially more representational and easier to connect too. Of course Impressionism on deeper scrutiny is exploring time and light in a way which will influence Cezanne and through his practice we see where Picasso and Braque are coming from in their early abstraction.

The method employed here (La Cathédrale de Rouen) of observation and repetition is similar to the ethos of experimentation and evidence gathering in the sciences, this approach is systematic and illustrates the searching or exploratory tendency in modernism.

The image below by Cezanne is clearly a bridge between impressionism and cubism, that these connexions are not always immediately clear is evidence that the logic of modernism has difficulty in penetrating the mainstream.

As Self draws attention to in his quote above Modernism is not overly concerned with being entertaining so this experimental investigation which is key to practices which we call modernist has an air of seriousness which is not always in keeping with immediate understanding but instead is cultivating a kind of education of the eyes it requires more time and investment from the audience. We can also say from looking at Picasso’s image, ‘les demoiselles d’ Avignon’ that this difficulty is not necessarily leading us to pleasant ideas but to difficult ones which are challenging in themselves. 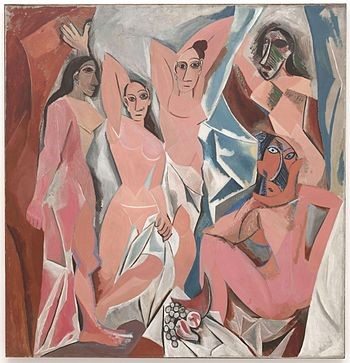 The Modernist art movements of the 20th century which are called Avant-garde are highly varied, take into consideration Cubism, Expressionism and Surrealism, visually the work looks different the abstraction of each movement is inspired by and informed by different theories and artists so in what sense are they all modernist?

In Cubism, following Impressionism and Cezanne the subject matter is depicted in the round, various angles and planes are shown simultaneously while the finer details are subordinated to the bulk or overall volume this represents a shift to the subject and perception, this will eventually lead to synthetic Cubism and Picasso’s later style where reality is something the artist uses, pushes around to make images which are important in their own right.

In Expressionism which is in its self a broad term, following Symbolism and taking Van-Gough as a starting point Kirchner (for example) is interested in communicating a state of mind which places emotion as the key component, the style emphasizes this through bold colour and exaggerated forms.

In Surrealism the transformative elements of art (catharsis and empathy) are combined with the insights of Freud to explore instinctive behaviour, unconscious impulses and dreams placing the minds automatic functioning as the key structuring element in the way images are composed,

‘Pure psychic automatism, by which it is intended to express, verbally, in writing, or by other means, the real process of thought. Thought’s dictation, in the absence of all control exercised by the reason and outside all aesthetic or moral preoccupations,’ Andre Breton, What is Surrealism? 1934,

This quotation from Breton (founder of Surrealism) is further evidence of the dense and difficult way in which modernist movements understood their own activity. The key fundamentals which link these movements is this sense of seriousness and a clear utopian vision of the improving and cultivating potential of art, for the cubists this was through a better understanding of the limits and potential of visual perception for the expressionists this cultivation came from finding direct ways to communicate emotional states and for surrealism it came from a better understanding of how ones own mind functioned.

The essence of Modernism lies, as I see it,

in the use of characteristic methods of a

entrench it more firmly in its

To summarise then modernist art movements could be very different from one another but never the less they shared a faith in progress, in the cultivation of the individual through artistic appreciation and in the notion of an underlying universal truth albeit in different guises.

Abstract Expressionism which came later shared these ideals combining the emphasis on emotion with an abstract style which tapped into universal ideas and gave importance to process, the images are not conveying any narrative but are experienced, certain fundamental feelings such as fear, happiness, sadness or a sense of time can be combined with an object which is emphasising its own process of creation, ‘painting about painting’ for example, the idea of a purification of artistic process is a result of this scientific style of investigation combined with an idea of progress towards some truth or authentic object,

‘The essence of Modernism lies, as I see it, in the use of characteristic methods of a discipline to criticize the discipline itself, not in order to subvert it but in order to entrench it more firmly in its area of competence. Kant used logic to establish the limits of logic, and while he withdrew much from its old jurisdiction, logic was left all the more secure in what there remained to it,’ Greenburg, Modern Painting, 1960

By the standards of Greenburg and what modernism had evolved into by the late 1950s Surrealism and Expressionism could be considered decadent since both movements drew heavily on tradition and form and both employed painterly illusions. 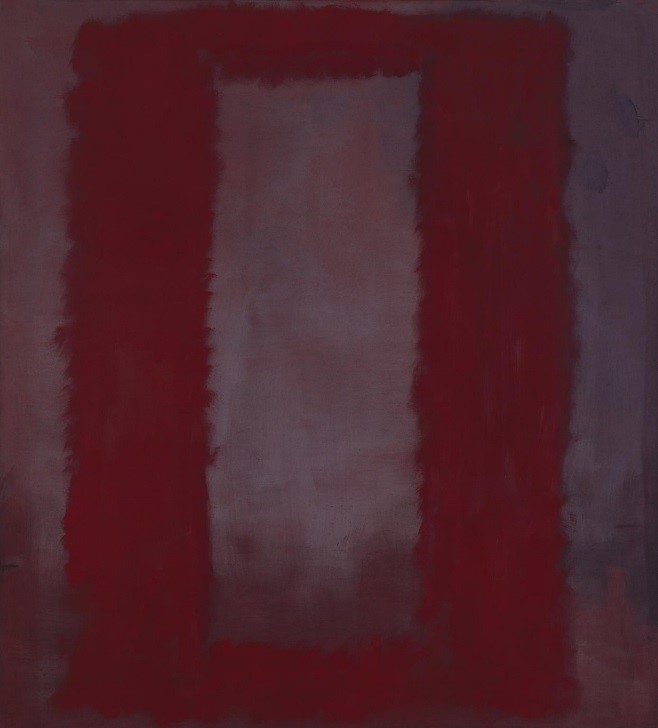 By the time modernism was coming to this pinnacle the broader public was cultivating a taste for consumer products and comfortable truths, the onslaught of the economic problems which effected Europe and America after the first world war were confounded by another war which dented the idea of shared universal ideals. The attitude in 60s can be summed up by the prominent postmodernist Paula Scher talking later,

‘When I think about what modernism felt like in the seventies, it deserved a smack,’ Paula Scher, Video: Postmodernism at the V&A

Scher’s words evidence that it was not only the public who were longing for something less worthy, creatives too were finding the monastic values of modernism restrictive and wanted new ways to make credible art this attitude coincided with increased consumerism and revolutions in media communications,

‘Charles Jencks wrote this extraordinarily resonant sentence in ‘Post Modernism’ in which he said that modernism died in 1972 when Pruitt-Igoe was blown up,’ Deyan Sudjic, Video: Postmodernism at the V&A

The destruction of this building is a good illustration of a lack of faith in the ‘international style’ modernisms architectural ideal, this also indicated a lack of faith in modernist ideas and a shift in what people wanted and what governments and creatives were prepared to give them.

‘Times Square was where we were in charge – the whole revitalisation of Times Square is a very interesting, complicated story, but it does show the difference between the modernist point of view of how to redevelop or to develop a city and what we were able to do,’ Robert A M Stern, Video: Postmodernism at the V&A 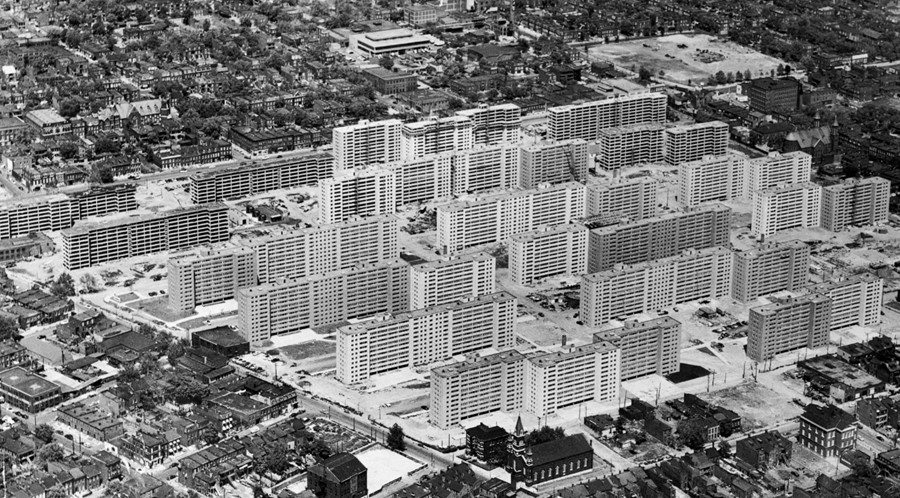 The removal of these modernist ideals however puts into doubt Baudelaire’s faith in the adventure and exploration of the city towards a positive self-cultivation, the flaneur has autonomy and is spontaneous, free, we can imagine the bewilderment and shock of Caillebotte’s couple if they were dropped into Stern’s Time Square, we have
normalized the manipulative and intrusive advertising and are even drawn to it like moths to a flame.

While Jencks does provide a good marker of the problems that modernism experiences in the 60s and 70s with his example of Pruitt-Igoe its an over statement to claim that modernism is dead. Modernism’s ideals and attitudes are still evident today what is true is that after the 1960’s Modernism was no longer the dominant cultural force and had given way to post-modernism.

The Collected Essays and Criticism, Volume 4: Modernism with a Vengeance, 1957-1969, Greenburg, University of Chicago Press, 1995.

Previous Story:
Diary of a Pop Punk kid – the team behind Pop Punk Pile Up 2018

Next Story:
The More Uncommon Slurs and Smears of Napalm Death