Upstart young festival Pop Punk Pile Up take us through what their debut year has in store for the UK’s Alternative scene.

[dropcap style=”font-size:100px; color:#992211;”]A[/dropcap]nother year, another new festival concept. Does the young upstart Pop Punk Pile Up have the chops to stick it to the big guns?

Riff media head honcho Adam Ruane has his say on what his team’s brainchild is all about.

Was Pop Punk Pile Up a spur of the moment epiphany for you, or had you been mulling it over for a while before you decided to go for it?
It was a bit of both really, we’ve run events on a small scale for around ten years and always dreamed of running a major event. We put some feelers out and before we knew it we had enough major bands for two festivals asking to play our events.

Did the scope of the undertaking scare the shit out of you (even slightly)?
Absolutely! It still does, every day I look at the line ups and can’t believe we have achieved what we have in less than a year. The scale of the bands we have and the future plans are immense.

What has the reception been like?
The reception has been a bit mixed; we booked The King Blues which caused some controversy. We did anticipate the festival to be received quite well but it’s proven difficult to launch. Haven’t given up, though!

Have you encountered any resistance from within the scene, or within the industry? Obviously other agendas can get in the way sometimes!
Generally speaking we’ve had so much support and encouragement from people in the industry. Everyone seems excited about it and are fully encouraging us to run the festivals. 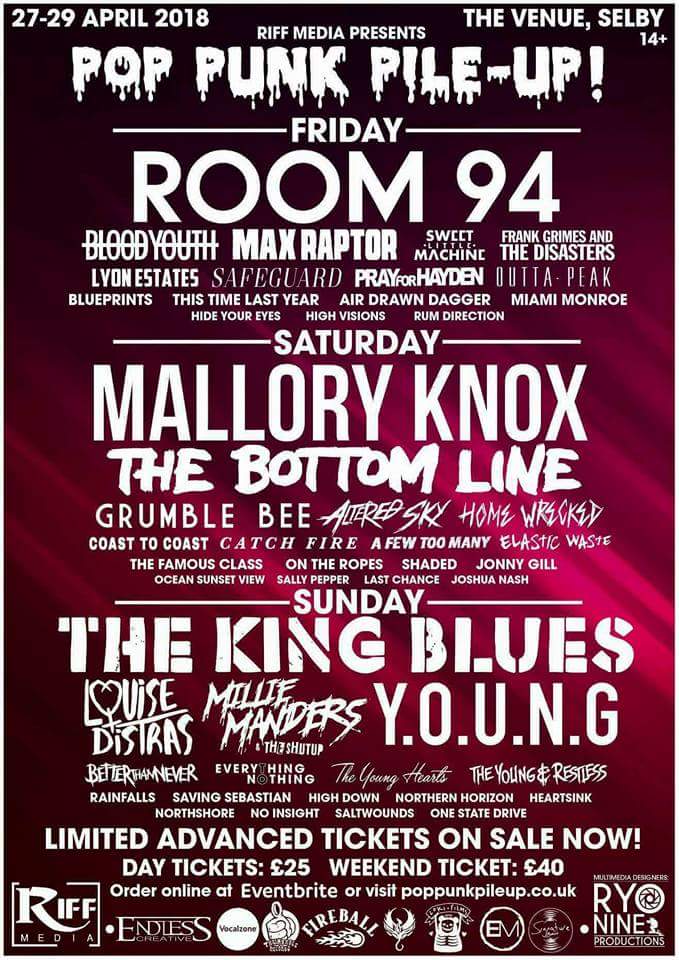 If this one pans out as planned, could you imagine yourself upscaling and taking the lines of Slam Dunk head-on in a few years? And if so, will underground bands still have a place on your line-ups?
Our future plans definitely see us wanting to scale up to Slam Dunk Festival’s size. I wouldn’t say we want to tackle them though as I love that festival! Hopefully, we can co-exist and help develop the music scene here.
Small bands have given us everything over the last 10 years. These festivals will always support smaller bands, and I don’t mean just giving five locals a chance either. We will always give as many as we can a slot.

Have you hand-picked all of the bands for this line-up, or have there been external forces steering the process too?
I think around 99% of the bands I’ve picked myself. I’ve had some offered to me and some have joined as part of touring with other bands on the festival, but for the most part I’ve picked out the bands I felt would deliver our strongest possible debut year.

Who are you most looking forward to seeing yourself?
Wow, so many bands! If I had to pick three bands per day I’d go with Blood Youth, Sweet Little Machine and Pray For Hayden on the Friday. It’s Mark’s last gig with P4H and we have been working together for ten years so that will be a great way to send him off.
Mallory Knox and The Bottom Line are a given for Saturday, I think this day is the biggest day on the weekend with so many amazing bands to catch but I am so excited for Coast to Coast, I personally think they are one of the best Pop Punk bands our scene has to offer at the moment and I can’t wait to see their live set.
Sunday will be the most awe inspiring day for me as I get to promote one of my all-time favourite bands in The King Blues. I know there’s controversy, but personally I think their live show is incredible and it’ll be an insane way to close the festival. Millie Manders and the Shutup will also be unbelievable and I’m really keen to see what Y.O.U.N.G can do live!

If you could pick out one of the unknown gems on the bill as a potential game-changer for Pop Punk/Alternative music, who would it be?
There are so many! But I honestly think Frank Grimes and the Disasters have something special. They’re amazing live, their recorded product is flawless… they’ve got what it takes to break through.

Was there a ‘pie in the sky’ massive band or even just someone who would have been great you wish you could have booked?
At the start of booking we asked Mallory Knox but were told they couldn’t do it, so we moved on from them. But in the back of my mind I always wanted them for the fest. Then, when we got the message saying they were keen my heart burst out of my chest and I immediately agreed. But as far as bands who couldn’t play I’d say Don Broco… although if the venue was bigger they would have done it! Damn!

Do you have any regrets about how any of your preparations have gone so far? How did you fix it if so?
Yeah, I never anticipated time would run away from us but we’re now three weeks away with a lot left to do. I wish that I’d had the team I have now from the start, that’s for sure. They’ve done so much to help the festival. We are all working so hard to make sure we are a success and can develop into the next big festival on the UK circuit. I’m working hard to secure investments and sponsors to help us grow so hopefully we can sell out this year and move into our new home easily for next year.

Just how big is the Pop Punk Pile-Up team? You’re obviously not a massive corporate, you must be putting the graft in!
The team is tiny! There’s me, who essentially does the booking, promoting and day to day running and managing. Then we have Jay, who is the stage manager and runs all the contracts, stage times, organising the bands, load ins and everything else – he’s been a total rock pushing the festival forward, it would have folded long ago without him. Dan from Thumbhole Records is in charge of a lot of our in-house PR and partnership enquiries. Billy runs our social media promoting. Then we have Josh who does all our design work, merchandise work and everything graphics related, with a little help from Dan. We also have a handful of team members to help with promoting on socials, and Steph from Domino PR who has got our name everywhere. In total I think there are thirteen of us – we’re often spread thin, but hopefully it’ll all be worth it.

Anything else we need to know?
We’ve worked night and day for months to launch the festival, it would mean the world to fill the venues up for both festivals this year and we can’t wait to share our future plans! If anyone is unsure on the events just message us, we reply almost immediately!

Tickets for Pop Punk Pile-Up can be purchased online from http://www.poppunkpileup.co.uk/

Next Story:
Becoming of the Avant-Garde