Writing with only your eyes 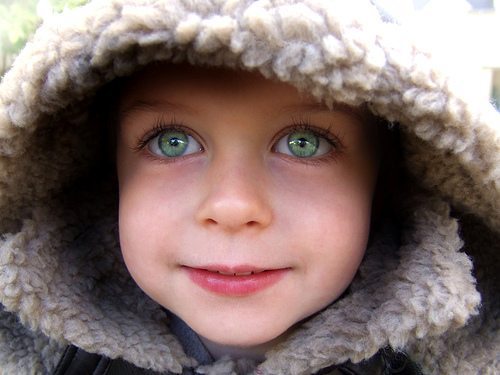 “One can also imagine that, on the long term, eye movements can routinely be used in man-machine interactions”, and doubtless, Jean Lorenceau’s research into ways to improve the lives of the physically disabled will soon be co-opted by the next-generation of HUD-enabled mobile communications companies. But between the the advent of eyeball-controlled augmented reality headsets and now, let’s wish Monsieur Lorenceau the best of luck with getting his technology where it’s needed, and a resounding ‘Bravo’ to the man.

A new technology described in the paper published online on July 26 in Current Biology, a Cell Press publication, might allow people who have almost completely lost the ability to move their arms or legs to communicate freely, by using their eyes to write in cursive. The eye-writing technology tricks the neuromuscular machinery into doing something that is usually impossible: to voluntarily produce smooth eye movements in arbitrary directions.

The advance could be of great benefit for people deprived of limb movements, such as those with Lou Gehrig’s disease (also known as ALS), the researchers say. It might also help to improve eye movement control in people with certain conditions such as dyslexia or ADHD and/or for experts, such as athletes or surgeons, whose activities strongly rely on eye movements.

in fact our eyes never cease to move

In everyday life, smooth pursuit eye movement is used to track moving targets, Lorenceau explains. While people do have the ability to move their eyes in exquisitely sophisticated ways—and in fact our eyes never cease to move—it is normally impossible to control those movements smoothly in any direction. 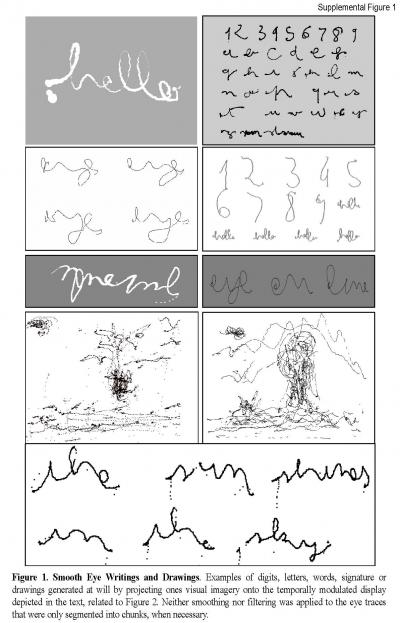 These are examples of digits, letters, words, signature or drawings generated at will by projecting ones visual imagery onto the temporally modulated display depicted in the text. Neither smoothing nor filtering was applied to the eye traces that were only segmented into chunks, when necessary.
Credit: Lorenceau et al., Current Biology

The technology relies on changes in contrast to trick the eyes into the perception of motion. When viewing that changing visual display, people can learn to control their eye movements smoothly and at will, the new study shows. It doesn’t take very much practice either.

“One can also imagine that, on the long term, eye movements can routinely be used in man-machine interactions,” Lorenceau says.

Lorenceau is now working on a better version of his eye writer, and tests with ALS patients should start next year.

Next Story:
After the Fireworks: 4th July, Higgs Boson, and notions of independence