It’s 2004, we sit crowded in a small office at a doomed Electronic festival, a nationwide power cut has Berlusconi’s Italy contemplating its future in pre-industrial darkness, the drug addled crowd, irresponsible and anonymous in the night, are tingling with nervous frustration and are contemplating acts of whimsical destruction. A bottle of cheap rum is clumsily passed around in the darkness and smashes on the floor, the doyen of American electronic music Richard Devine is discussing remixing the daft 80s classic ‘Broken Wings’ with Venetian Snares aka Aaron Funk who is distractedly grinding broken glass with his heel. This is a moment I’d like to savour but one of the artists in my ‘care’ has just slashed his chest and head with broken pieces of a toilet bowl that he’s just thrown at a security guard. Also the persistent rumour that a local Italian gang has taken exception to me for some act of disrespect is playing on my mind. I should do something, but what? Maintain order? How and in the end why?

Aaron Funk passes me another bottle of rum ‘this is great!’

Intensely prolific Aaron as Venetian Snares has managed to release an average of two diverse sounding albums per year for the last four years as well as varied and numerous singles and Ep’s. This slew of releases appear barely able to meet the demand of his rapidly expanding Indie fanbase of heavy beat heads.  In concert his ferocious presence comes to the fore, split second mixes collage his better known epics within unknown whimsical forays which merge into mesmerising sonic voyages of demonic dancehall, paper cut melodies, rapid silences, and violent arrhythmia. Crowds usually whip themselves into violent ecstasy, jumping and gesturing like b-boys on a heavy speed and acid combination. Rome is no exception.

Seemingly at home amongst the darkness of a festival on the verge of collapse Funk’s performance drew heavily from ‘The Chocolate Wheelchair’ (2003) his latest release on Mike Paradinas’ Planet Mu records.  Described by Aaron in previous interviews as a ‘party’ album The Chocolate Wheelchair shows strong compositional skills as well as a talent for rebellious breakbeat anthems and was considered by the iconic Warp records, amongst other electronic luminaries, as his best work, perhaps even ‘landmark’.

In tracks like ‘Abomination Street’, the Coronation Street (a popular UK soap) theme is rearranged with the punk classic ‘O Bondage Up Yours’ by the X-ray Specs structurally held together by an intense cut-up of breakbeat drums.  The striking feature of this and many other tracks on the album is that within the miasmic use of different funk, rock, kitsch, and dance samples a discerning and infectious rhythm remains to shock the listener forward. The staccato drum n’ metal anthem ‘Too Young’ streams a number of four-four beats through each other in an interlocking weave that samples a 80’s hair band to paleolithically stomp its way into the cosmically complicated ‘Langside’ and beyond into the vein popping jungle funk of ‘Einstein-Rosen bridge’.  Moving away from his darker more distorted beginnings Aaron’s production on ‘The Chocolate Wheelchair’  is surgical, deep, and overwhelmingly directed. 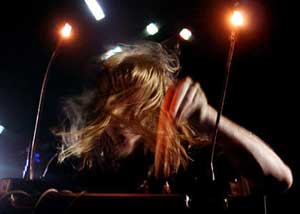 Created from inside a cold brick building deep inside Canada’s interior, Aaron’s music contains the kind of energy that speaks volumes of long dark days of cabin fever, numerous cigarettes, vodka from the bottle, years old chicken soup not to mention a ravenous appetite for electronic music’s more rock sensibilities.   That he grew up in Winnipeg, Manitoba and has remained there brings into relief his regular raucous transgressions into North America and Europe.  Boarding long plane rides, big and small, to venues of varying sizes he generally leaves his albums of cold musical atmospheres in people’s bedrooms preferring to cart his crowd pleasing yet ear bleeding anthems around in a stained rucksack.

In interviews Aaron often avoids or subverts questions of meaning, emotion and personal relevance, but we’re in Rome and neither of us is going anywhere.

‘I swear people ask me the same shit all the time.  I feel like I shouldn’t be helping these people who really are failures as journalists… like “your music can be very dark and scary, why is that?” The music’s fun! And not just the chocolate wheelchair others too’

Can you project where you want your music to go?

‘(laughs) that’s something I always get asked’

and your standard answer is?

‘Don’t know how to answer that. Probably “who cares”, Although I think as far as electronic music goes these days, people do have more insight on the whole process, and that’s from actually trying to do music themselves.’

‘Basically, I’m just doing the same thing I always have.  I truly appreciate the fact folks are buying my records but at the same time it does seem funny that as a lot of my music becomes stranger and stranger it is better received.  I have no real concept of what people expect from me, I think people are going to hate my new records because they usually represent such a different side of myself than the side I showed on the last record, but in the end they don’t.’

What makes The Chocolate Wheelchair such an integral work in the Venetian Snares’ catalogue is the extent to which it provides an observation satellite to preceding works.  Rumbling electronic chords splattered with drive-by breaks, overturned melodies, and hitch-hiking mc’s are all part of the Venetian Snares ride as much as deeper voyages into places that aren’t so easily characterised. What The Chocolate Wheelchair does leave unvisited are the more atmospheric and darkly whimsical continents of his back catalogue, ominous states of which are thoroughly explored on ‘Winter in the Belly of the Snake’ (Planet Mu 2003), ‘Printf…’ (Isolaterecords 2002) and parts of ‘Find Candace’ (Hymen 2003).  This is appropriate because like the works of many musical atmosphericists they are to be taken as part of a whole and not really to be sampled individually.

‘Sometimes things just need to be completely synthetic.  It’s the only way to express that which does not exist on any tangible level.’

While placing Venetian Snares’ music amongst defining electronic artists such as Drexciya, Aphex Twin, or Squarepusher is warranted, happily comparisons fail to encapsulate the unique qualities that his music present.  Let’s say that the charisma behind the sampler is different. The few thousand subtleties that torch a musical second in electronic music have to be particularly individualised, a guitar players pressure on the instrument will individualise it them way that is much more difficult with sequencer.  The accomplishment of electronic music and production is in maintaining the individuality of the musical meme.

If classic rock’s ego lies in some expressive sexuality, then electronic music’s conceit is in its own cleverness.  Punning titles, conceptual parody, obscurist tendencies, cheeky geeky sexuality, cartoons, and the creation of an intellectually aloof personae are all typical modus operandi of the genre (Venetian Snares song titles include: ‘More Drugs Less Love’, ‘Intense Demonic attacks’, ‘Einstein-Rosen Bridge’, ‘Twisting Ligneous’, ‘Breakfast Time for Baboons’, etc) . This is not to claim that Aaron embodies all or any other these things but it’s the felt underlay of the industry to at least be interesting, so there you are.

The evocative contradictions of Funk’s music are highly entertaining, as well as very human, and perhaps not so much complex as specific.  Instead of simply sex, death, happiness, and angst read ‘looking down a stairwell at an ascending lover as a more emotional sexual position than sex itself’, ‘death by hanging after watching a program on hypnotising chickens’, ‘finding happiness in the articulated rhythm of a garbage truck compacting trash, punctuated suddenly by the brittle joyous ejaculations of breaking glass’, ‘Is the holiday/work cycle a rut?’.  However the ‘intelligence’ per se, of electronic music is largely overplayed and many pundits generally shy away from the fact that as a whole it’s the most evocative genre of music working with a pulse.

Aaron claims that his interest in inanimate objects approaches the alchemical but its not simple symbolism that moves him, but the manner it which different symbols relate to each other.  That is, not simply transmutation but understanding through the processes of symbolic ordering, not to mention the power of forms in repetition.  In his recent work we can see similar musical lessons learnt from his early experiments with found sounds. 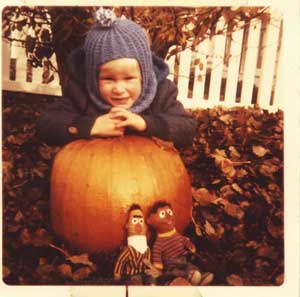 ‘When I was a kid I’d use a bunch of ghetto blasters playing all at once to play different sounds I’d recorded with some other shitty ghetto blasters. Most of my sources I’d get riding around on my bicycle and just listening for interesting sounds. I’d use garbage bins and streetlights and anything else I could find that was hollow or metallic to bang out rhythms on. Then I’d set up all the ghettos and record them all playing into that same ghetto blaster. Then I’d play a bunch of those tapes all at the same time and record that and so on. Then I would do cut-ups or pause-ups of those tapes to create a more startling rhythmic effect. A strange ritual in retrospect.  A turning point was when I somehow came across this looping delay pedal that held a 2 second sample. This pedal coupled with the ghetto blaster experiments really changed my life.’

A feature which regularly appears in Venetian Snares print is ‘questioning his sanity’ either through the guilty whimsy of childhood (repetitively counting his fingers to music) versus more introspective musing on the fringe benefits of abnormality.  But these are really simple conceptual traps and snares of an artist that doesn’t particularly want to be represented, and this also may be to extent why he has stayed in a relatively small Canadian town. In his own words ‘I’m just a guy making music, if you want a superstar or something look elsewhere’. When asked whether he has travelled much other than on tour he laughingly replied;

‘Where am I going to go? The grand canyon?’
Indeed, it’s late and Rome remains in lurid darkness, the weirdness has abated, people have been patched up and transport is organised for those artists willing to go back into central Rome for connecting flights elsewhere.  The rain pours down on post-rock acts Mice Parade and MuM as they strum guitars on rooftops and sing softly between boozy belches.  Richard Devine drifts off into the crowd and Aaron gets a lift into town.  Leaving amongst the medieval looking punters wandering around with candles covering in rags we promise to swap copies of rare David Lynch films and keep in touch, but its hard to imagine any continuity from this situation to a conversation elsewhere in normality.

Originally published ages ago in 2004.
Original photographs either incriminating, crap or lost.
All photos taken from Venetian Snares’ Myspace.
Art Devine Thunders was barely present at the Press and Artist Desk, Bitz festival in Rome 2003.