Troller seem undecided which direction to go in – sepulchral or affirmative and this seems to be the sound of a group still in transit. 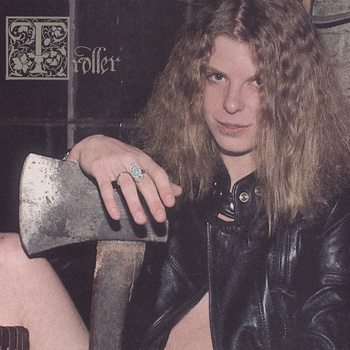 The Texan group’s work seems animated by the same necrophiliac tendresse for the 1980s that’s apparent in other American neo(n)-retro groups like Tropic of Cancer (some of the beats and atmospheres used are very similar) or Cosmetics (there are also some similarities with Chromatics and ADULT.).

It soon becomes clear that as well as comparisons with their contemporaries there are numerous parallels with the work of 1980s groups. However, can we really call still call it necrophiliac when the 1980s is so much the sound of now? When there are clubs dedicated to the 1980s run by people barely born when the iconic dark 1980s sounds were being forged? Isn’t the sound of the 1980s now hyper-contemporary (especially given that the polarised social and political conditions of the time are increasingly similar to what we experience now).

to confuse[/quote]
Troller then are trying to break into an active but crowded market. At first glance, the presumably ironic artwork suggests they’re aiming for a darker U.S.P. than some of their contemporaries. The presence of the axe and the lurid 1970s heavy metal aesthetic seems like a deliberate bid to confuse.

There is darkness here but it’s not as squalid or extreme as the artwork implies and it’s sometimes offset by an almost excessive sweetness.

We start with ‘Milk’ – a doomy, druggy dirge, like Malaria on a downer, overflowing with joie de mort. Ugly bass, tortured drones and a distressed vocal carry off the so-gloomy-it’s-uplifting effect achieved three decades ago by Cabaret Voltaire, Xmal Deutschland and others. The album is made more awkward and much more interesting by the way the songs are interspersed with untitled instrumentals and it’s interesting to listen to these tracks separately and in sequence. ‘A2’ intensifies the depressive mood with its crypto-industrial allowing analogue murk and bleak radiophonic winds.

The backing to the overly romantic ‘Tiger’ has a trace of Faith-era Cure, but blended with histrionic high-pitched vocals that are almost over the top. The mood again shifts abruptly with ‘A4’, an intriguing and atmospheric kosmische sequence of arpeggiated analogue bleeps which is positive without being cloying.

The 1980s parallel that comes through on ‘Best’ is This Mortal Coil. It’s more restrained and marked by interesting drum patterns that introduce some tension and contrast. This is followed by another vocal track, ‘Thirst’ which has the atmosphere of an early Sisters of Mercy track. ‘B2’ is a real highlight  – a superb flow of abstract and spacey electronics swathed in reverb that works very well in the dark.

Next is ‘Winter’, which opens in convincingly downbeat fashion but the main theme introduces an optimistic,  complacent note that doesn’t quite ring true. The final instrumental, ‘B4’, successfully returns to the dirge-like atmospheres of the early tracks and sounds like it could have come from some obscure Belgian cassette release from the 1980s (which is surely the intention).

Appropriately for its title, the vocal on the closing ‘Peace Dream’ has the feel of Garlands-era Cocteau Twins, both in terms of the lost tone of the vocals and the swirling Gothic atmospherics. This works well because it doesn’t (quite) over-indulge in vocal or lyrical kitsch and uses interesting textures.

All in all, its a curious release split between vocal and instrumental poles (which might more logically have been split into two separate EPs). The instrumentals seem to show more promise and even bear traces of the sins of originality and seriousness so detested by hipsters – so perhaps further movement in this direction wouldn’t be the wisest career move.

Equally, the tone of the first and last vocal pieces is much more serious and intriguing than the others. Troller seem undecided which direction to go in – sepulchral or affirmative and this seems to be the sound of a group still in transit. What happens next is hard to say, but worth keeping an eye on.