Tower of Strength: The Mission live at Shepherd’s Bush

More so since witnessing support act Peter Murphy, who was a rare treat and firm favourite with a crowd formerly known as Goths.

More than a few 80s hat and eyeliner bands don’t like the term ‘Goth’. In their kohl-rimmed eyes they’re just playing Rock and Roll (see Sisters of Mercy’s Andrew Eldritch). However, where there is a definable aesthetic an identifying term will be used. Take a cool subculture with good music and a following will develop. As the years wear on, provided the scene never gets too popular, you can be sure that regardless of age, careers, kids and all that ‘life’ crap, the fans will remain faithful.

So it was that, clutching shirts, posters and other merch the crowd showered applause and appreciation on Ex-Bauhaus Peter Murphy, who hit the stage strong and freaky. While his new material isn’t similar enough to the Bauhaus corpus for a lot of the fans, it is formidable in its own right. Accompanied by two guitarist/singers the iconic Murphy sang through a set of macabre folk numbers. Original, powerful and organic, this new project has an engaging folk sound that reminds you of murder ballads, shipwrecks, women of questionable bulges and the detritus that gathers on your cape after a midnight scamper.

Murphy has a reputation for being a something of a diva but on the strength of this performance you’re inclined to give him a pass. Gyrating, grinding, swinging and pirouetting, the man captivates attention. Emphasising the music through movement, it’s a performance that feels effortless and entertaining. The set made full use of both guitarists, who by using counterpointing pace and judicious use of effects created a wide wave of seismic mood, buoying the strange Murphy to great heights and allowing him to crash his seiche over onto the trapped audience.

With the changeover, the 40-something crowd surged to the bars, 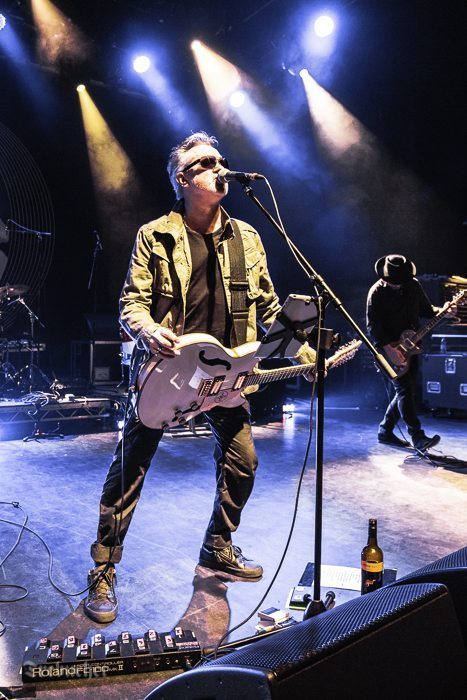 rekindling old friendships, and making the drunken most of the inter-Mission (hur hur hur). From every direction you could hear discussions ranging from the last gig attended, favourite albums and the latest album. Regarding Another Fall From Grace, opinions ranged from the cautiously optimistic ‘There are some good moments on there, I need to give it more time’ to the standard rejoinder to any new music from a band with history: ‘Shite’.

A huge cheer went up. Striding onstage the band hit a jangling chord and the show began. Wayne Hussey, despite battling a cold, gave his voice full throttle, soaring through lyrics as, clad in flowing black, backing singer Evie added some extra lift to the top end. With Simon Hinkler adding his sumptuous guitar leads and Craig Adams’ dark groove, each song was given a ballsy rock rendition that throbbed through the cramped crowd.

Hussey has reported that after several years he’s rekindled his love for the 12 string guitar, and at the urging of fan Billy Corgan, revisited the playing style from the his early albums with The Mission and Sisters of Mercy. The 12-string guitar creates a choruslike shimmer when plucked and a reverberating crash when used to pump the rhythm. Hussey’s guitar playing has never received much recognition but he’s very effective and uses the 12 string to create a wide dynamic regardless of setting. Sporting his own white signature 12-string (a good looking instrument based on the Gibson White Falcon) Hussey’s playing brought the fire and thunder to tracks like Wasteland and Tower of Strength. It’s such a part of their sound it’s hard to image The Mission without it.

Anthems Tower of Strength, Butterfly On a Wheel, and Wasteland brought huge cheers and deafening singing from the audience, but it was the electro-krautrock workout late in the set that pushed the evening beyond a collection of hoary favourites to a standout event. A magic night with lots of different moments and moods, the November gig is highly recommended to all who missed this one (diehards will already have their tickets).

Next Story:
Global Sustainability : Futile Surface-Scratching or Hope for the Future?