Two current exhibitions on opposite sides of the globe present work from two contemporary women artists; each, in her own way, a concrete artist. At RaumX, in north London, Katrina Blanin shows paintings and monoprints. 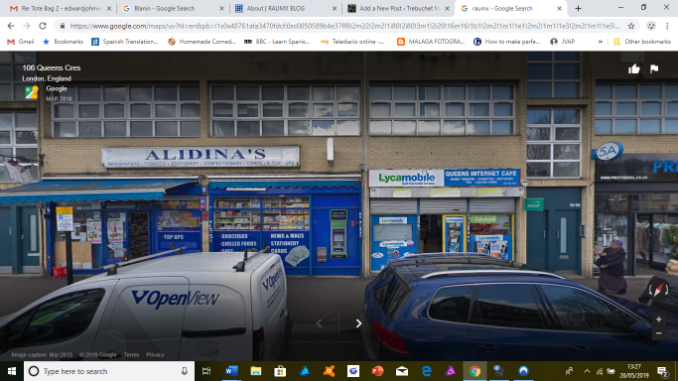 RaumX on the first floor above a strip of shops in Kentish Town, north London

[dropcap style=”font-size:100px; color:#992211;”]T[/dropcap]wo current exhibitions on opposite sides of the globe present work from two contemporary women artists; each, in her own way, a concrete artist.

At RaumX, in north London, Katrina Blanin shows paintings and monoprints. The studio/gallery is an artist led independent project space for art and architecture set up and run by Martina Geccelli. It also holds talks and seminars on contemporary art and architecture. Meanwhile, down under, in Paddington in Sydney, Australia, Jane Bustin shows assemblages at the Fox/Jensen Gallery.

Concrete Art is a broad category of work, characterised by its exclusion of representational content. We neither look through its surfaces to see a world represented beyond, nor do we look at its surfaces to recognise familiar objects scenes or events. Rather, we look at its constructed objects in order to see them for what they are, as objects in themselves, physical presences demanding our attention.

Nevertheless, these works are visual works and they come from a tradition of ‘picture-making’ that was representational and it remains moot as to whether concrete art is coextensive within that tradition or is its antithesis.

“The process of experimenting with simple systems, as well as palindromic and isochromatic structures, aims to produce paintings with a logical clarity; both spatial and material in character. The re-examination of historical colour theories and early Renaissance painting conventions, specifically concerning form, is transferred to an investigation which asks questions of twentieth century constructivist and concrete art, in order to generate new possibilities.” 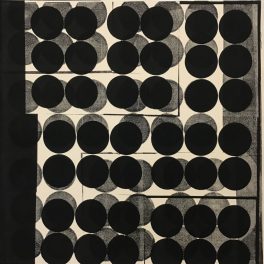 In any case, we should not look for figurative content within a work of concrete art. In Katriana Blanin’s work, the stuff of the print is its ivory paper and the black etching ink that forms its marked surface. The paper isn’t white. It is that lovely ivory, smooth surfaced Fabiano 300 grm deckled edge paper that she squares off for the prints. Whilst all rectangles permit 180° rotation – the ‘’palendromic” reversal, it is the square alone that provides opportunity for 90° rotation.; and this she exploits in these monotypes.

The moves are quite simple, rotating stencilled shapes and allowing for the process to dictate the exact surface detail as it transpires. Speckles of white show through – not as a failure to complete the coverage of the print layer but – as forensic register of one layer (amongst others) in the activity documented. The etching ink she uses is densely black when so double layered. This has the effect of aquatint and the juxtaposition of the single layer revealed at an edge of the double layer calls attention to the nature of the density and translucency of the ink.

In some of the paintings she layers a paint that she has made herself – a combination of gouache (a flat designer paint using gum arabic as a medium with acrylic paint using acrylic polymer as a medium. (Both paints are water based. The combination allows acrylic to have the flattened density of the gouache with the versatility and strength of acrylic colour.)

What shines through the work is a focus on both material and process; together with a renunciation of figuration as a feature of painting that demands invisibility of the medium. It is a refusal to grant painting the invisibility needed to fabricate a ‘window onto the world’.

Jane Bustin’s exhibition at Fox/Jensen Gallery in Sydney recalls the Imagists of a century past. Curiously, the movement was brief and yet remains an influence on contemporary writers. That movement was inspired by the French vers libre and the prose poetry of Baudelaire and Rimbaud. Of course, the idea of an image as poetic brought visual experience centre stage. Not, ‘What do we see when we negotiate the world using our eyes?’ But rather, ‘What do we see when we look?’ Here is a ‘proem’ by French writer Francis Ponge,

Halfway between crib and cage the French language puts crate, a simple slatted box for transporting those fruits that fall ill at the least lack of air.

Built in such a way that it can be broken down effortlessly after use, it is never used twice. It is really more perishable than the deliquescing foodstuffs that it carries.

On the corners of streets that lead to the markets, it gleams like white wood without wood’s vanity. Still very new, and slightly surprised to find itself in this awkward position, having been thrown into the gutter without hope of retrieval, it remains a most likable object on whose fate we will not dwell for long.”  (Ponge, 1942)

The existentialists were keen on Ponge, even as they shied away from poetry; thinking of it as degenerate form of literature, its concern with words in themselves and not with their external significance.

“In many passages in Camus, poetry has a positive connotation. This connotation, however, refers to a specific quality of language, viz., the use of vivid images that manage to convey some truth about the human condition, rather than to the merits of poetry as a specific literary form… Camus saw in the work of Francis Ponge an eminent illustration of the task of literature in the absurd situation of Post-war France (Camus 1943). Sartre also dedicated a long and largely positive review to the work of Francis Ponge, seeing in it a kind of profane phenomenology (Sartre 1947). ”  (Deranty 2019)

The notion of a ‘profane phenomenology’ describes well the encounter with Bustin’s pieces. They are surfaces – appearances. But the surface is everything. The appearance of the material stops right there, on the surface. Paradoxicaly, it is this surface quality that gives them so much presence. They shine, glow, reflect, hold onto attention; colour lies smooth, mute and dead. Small areas are planes of silk burnt at the edge; and yet clean and purposeful. In all: beautiful. 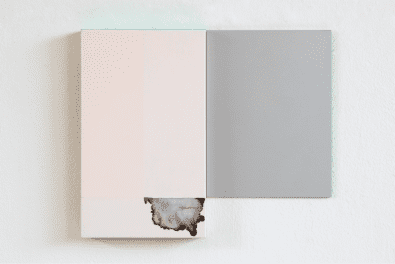 Her objects are no more than that: objects. They sit there, recalcitrant, stubborn and, somehow, human, fragile, honest and delicate. 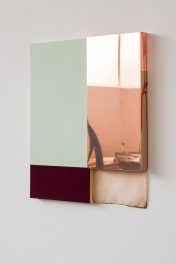 I am reminded, too, of the work of Wittgenstein on colour. Here, the philosopher brings his insights to bear upon the puzzling phenomenon of looking at colour:

(For it is certainly not an accompanying mental phenomenon – this is how we imagine ‘thoughts’ – but the use, which distinguishes the logical proposition from the empirical one.)

Both these women artists extend the tradition of constructivism and constructive art. Both were taught by the British Systems artist, Jeffrey Steele; and each, in her own way, promotes a beauty that calls upon us to think further about the nature of art and our relationship to it.

‘The Case’, (Translated from the French by Joshua Corey and Jean-Luc Garneau.) Source: Poetry (July/August 2016)

Next Story:
The London Original Print Fair at the Royal Academy