The London Original Print Fair at the Royal Academy

Andrew Edmunds deals in antique political prints. In this show at the Royal Academy, the works he shows stand up well to contemporary art and its political ambitions.

The annual print fair at the Academy is a relaxing yet rewarding stroll through various passages of (mainly) modern and contemporary art. One of the few exceptions is Andrew Edmunds’ stand 4. Edmunds handles Hogarth, Gilray and Rowlandson, amongst other satirists, political commentators and printmakers. Enlivened by the company of newer works, Edmunds’ satirists look remarkably contemporary. The political cartoon is alive and well and Sky News ‘All Out Politics,’ takes a daily look at a broadsheet cartoon as it proceeds to review the current state of our nation and the world in which it sits. However, The Times’ Peter Brookes, The Guardian’s Steve Bell, and the Independent’s Dave Brown are not accorded the status of fine artists.

Everyday Genius (In a Nutshell)

Previously, when considering the nature of genius in the fine arts, we sought to grasp the nature of an aesthetic idea, as that was introduced by the enlightenment German philosopher, Immanuel Kant. Kant thought that genius manages to show what cannot be described under rational concepts. It is the job of the fine artist to capture through aesthetic ideas that which cannot ordinarily be caught by our ordinary conceptual apparatus. What the artist must do, is to show us things we might not otherwise be able to imagine.

Think of jokes. If you explain a joke, it evaporates; or, perhaps better, our amusement disappears in the explanation, which falls short of our original enjoyment. Somehow, the joke makes its point by getting us to laugh immediately. This is what Kant means when he talks of the aesthetic idea quickening the mind. In literary circles, writers are advised, early on, ‘show, don’t tell’.

Apart from jokes, the phenomenon appears in quotidian circumstances. As when, for instance, an image is fashioned to persuade us of some point of view. The image need not be visual. It might be a literary image used for the sake of political argument; as when, for instance, in his speech to the Conservative conference in October 2012, Chancellor George Osborne crafted an image of two cultures. He is speaking of welfare reform and the development of the new Universal Credit,

“Where is the fairness, we ask, for the shift-worker, leaving home in the dark hours of the early morning, who looks up at the closed blinds of their next door neighbour sleeping off a life on benefits?

When we say we’re all in this together, we speak for that worker.

We speak for all those who want to work hard and get on.

This is the mission of the modern Conservative Party.

We represent not the factional interest of organised labour; nor do we indulge in the lazy politics of envy.

We leave it to other parties to mark people by their background, to divide, to try to re-order and pre-distribute society by the rules of their favourite sociology textbook.”

The image conjured up is of two adjoining houses, perhaps semi-detached. The country, we assume, is divided evenly between the two houses. In one, a shift-worker gets up and goes off cheerily, without complaint, to work. Whilst in the other, a house whose windows are shrouded by blinds, as yet undrawn, revellers on benefits “sleep off” the hedonism of last night’s indulgence; the indulgence paid for, we are to assume, by the taxes of the man who has selflessly gone off to work his shift.

The Job of the Image

This caricature divides the country into two, without remainder – as represented by the two homes next door to each other. Half the country works hard and provides the image of wholesome decency. The other half is peopled by shiftless scroungers, idling their lives away in drunken drugged up dens of debauchery.

It makes life on benefits sound delightfully attractive. It’s just that no evidence for such a life exists. Those on disability benefits are, by-and-large, unfortunate. Most struggle to make ends meet. Few are the cynical exploitative masterminds who have conned us out of our tax payments. One wonders how much benefit fraud exists compared to the income lost to government through legal dodges that benefit the super-rich and the large corporations. But boy George’s speech to the home crowd will have gone down well; and, let it be said, his speech is well written, calls upon a well-crafted image, in that it sways those who might have wavered and consolidates belief in those already onside.

Nothing about the image contains truth; nor is it meant to. It is shown not told. Thus, it is a matter for interpretation. George Osborne did not tell us that the nation is divided into two halves, one of which works hard, the other which dawdles along. For that is patently untrue. Rather, the image gives us that. (When we talk of something given in an image, it’s like the background stuff that you ‘know’ in a dream: that which is given in the dream sequence.) So, it seeps into consciousness unheeded and unasserted; but taking up residence, nonetheless. Such is the job of an image. Such is its place in argument.

Back to the Arts

Let’s look at Hogarth’s Beer Street and Gin Lane. In 1688 William of Orange was made king and with his accession came war with France. In order to fund his campaign the king put taxes on brandy and beer but lowered it on gin. 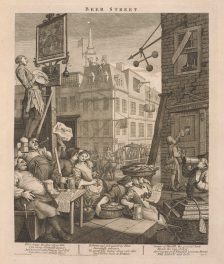 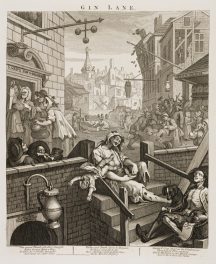 “Gin was now made by a myriad of amateur distillers rather than by the old guild. It was the first time in history that large quantities of spirits had been cheaply available. After 1694 a glass of gin cost less than beer. Gin consumption rocketed from half a million gallons in 1688 to 19 million in 1742.

The result was the carnage that Hogarth recorded (…) Perhaps the saddest story associated with the gin craze was of Judith Dufour who took her 2-year-old son from the workhouse where he had been staying as she had been incapable of looking after him. Once out, Judith murdered the child for the clothes he had been given, sold them for 1s  4d and spent it immediately on gin.” (Jeffreys 2016)

The argument could not be made more clearly. Beer goes with industry and plenty; gin with indolence and penury.

At stand 8 is Pratt Contemporary Art. Amongst those exhibited, Marcus Rees Roberts shows his new set of monotypes, “The Passion and Its Objects (after Durer)”. It is interesting to see the work of Rees Roberts in the same exhibition as Hogarth, Rowlandson and other such artists. Whilst studying at the Slade, he collected works of these satirists from small print shops in the Portobello Road and from Andrew Edmund’s gallery in Soho. Writing on his early work, the art historian, Ben Thomas tells us,

In these new prints, Rees Roberts revisits Christ’s Passion, which he has worked on before in a number of series entitled Stabat Mater. Those series enabled him to come at the subject matter obliquely, from the mother’s point of view, so that we consider the passion through her grief. In “The Passion and Its Objects (after Durer),” he uses hand tools and kitchen objects to bring home the quotidian aspects of the life of Christ. It was a gimlet that first bored a hole to house the nail that would suspend the convict to the wooden cross; a hammer and nail that finally secured that suspension. It was a pair of nail pincers that prised out the nail from the hand of the dead Christ at the Deposition. A water pitcher sustained the workers as they crucified him and when they subsequently took him down from the cross.

Martin Heidegger talks of the ‘ready-to-hand’ nature of objects, so that we think of tools as extensions of our proprioception. It is a way of grasping the world – to see it as intelligibly ours to grasp and to form. A screwdriver works by fitting it into the slot of the screw head. It also works when we need to open a tin of paint. We organised the closure of paint tins around the feature of the screwdriver that best fits it to the task at hand. What could better bring us to our sense of home than kitchenware and hand-tools – the things we use to measure and shape and engage with a world; to ‘dwell’ in the world, as Heidegger puts it. And Christ’s dwelling was to be an image of our own habitation of the world. 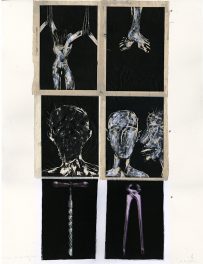 Marcus Rees Roberts, “The Passion and its Objects (After Dürer) no. 7,” monoprint, 2018

There is humour in these works too. The very comic look of a face drawn across the page, against the shimmering photographic image of the tools. The photographic images look as if the colour separation hasn’t properly worked and the image is a ghostly flickered layering, reminding us precisely that it is an image. The piece of silver in the mouth of poor Judas – a man destined to be a figure of villainy for the rest of history – as if he had a choice; and the broken body of Christ being taken down from the cross, looking like a lucha libre wrestler being stretchered out of the ring in some back street in Mexico. The humour stretches to our inhabiting the world in this way – that it is all fabulously hopeless and unshaven and smelly and bitter and funny.

Thomas, B (2015) ‘The Early Prints of Marcus Rees Roberts, in Art in Print, 2015. at: https://artinprint.org/article/the-early-prints-of-marcus-rees-roberts/

Next Story:
Galerie da-End: What Ticks