In 1968 Jay Lynch worked on Bazooka Joe for the Topps Company by day and drew Underground Comix by night. 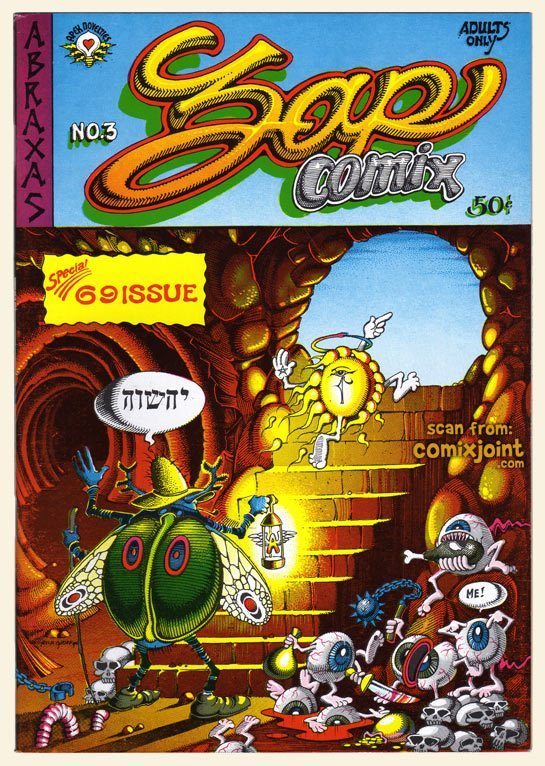 They were comix characters. The X marked them as uncensored by the Comics Code Authority, a board set up after a Senate investigation into the horror comics craze of the nineteen fifties which imposed tight restrictions on mainstream publications. Underground comix sidestepped these arbitrary rules by self-publishing and distributing their product through Head Stores which sold paraphernalia for drug users.

It was Crumb who broke the mold. The first two issues of his Zap Comix made a profit and, in association with Print Mint, expanded to become an anthology title featuring guest artists such as Rick Griffin, Victor Moscosa and Spain; bold and innovative talents who thrived in the ‘anything goes’ atmosphere following the summer of love. These diverse dropouts produced jarring and eyeball burning images which delighted their stoned readers. 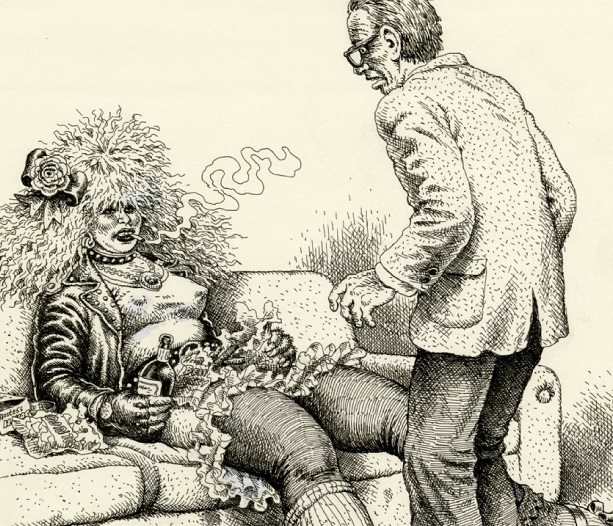 Crumb was the celebrated artist and the most daring young man on the underground trapeze – until S Clay Wilson arrived in San Francisco fully formed and ready to shock.

‘S Clay’s stuff makes my work look insipid’ was Crumb’s take on the new maestro from below.

In a way it did. Crumb got away with murder because, even when portraying the adventures of an incestuous family, his cheerful old-time graphic style managed to gift any scene with gratuitous warmth. Crumb’s fuckers were always pleasantly seedy whereas Wilson’s characters ooze an obscene malice and are hard to look at for more than a few seconds.

Captain ‘Bite my crank’ Pissgums, covered in blood and shooting out buckets of jiz from his ginormous penis, led a breathtakingly ugly crew of homosexual pirates who sailed vile waters in pursuit of treasure, casual brutality and instant gratification. On their first outing they encountered the good ship Quivering Thigh ‘manned’ by a rival crew of foul mouthed Dyke Pirates. What followed was an abrasive riot of hilarity and bone crushing perversion which blasted away all previous notions of what an over-the counter publication might contain.

Opulence and obsession rarely travel in the same compartment, but without obsession the hands of the artist are just empty vessels. Many of Crumb’s stylistic gestures and less controversial images were lifted or stolen by mainstream media. Nobody from the corporate world wanted to be associated with the sight of S Clay Wilson’s Chequered Demon forcing his lust power into the mouth of a withered corpse.

Such garish images projected the Underground Death Ray directly onto the printed page, heedless to civilized cries of restraint. Its sordid radiance beamed out from the Golden State where the poet Jim Morrison liked to expose his suntanned parts in public, racial conflict was at boiling point in the Watts district of L.A., Charles Manson was busy planning a successful singing career and Frank Zappa was making a decent living by flinging orchestrated vitriol at his paying customers. 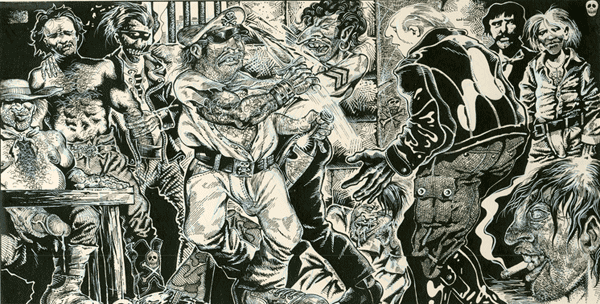 Crumb is now a respected cultural figure and the poster boy for the underground comix scene. Deservedly so, his output has been consistently misanthropic, provocative and always pertinent for over forty years. Charmingly, he still wears his unexpected fame and fortune like a shabby suit, but you will pay a small fortune to buy his original artwork. Contrast his position with the artists of the ground breaking Tijuana Bibles who prostituted their talent for a few grimy bucks and died in obscurity.

S Clay Wilson was no ‘bread head’. He was only in it for the pleasure and it was his pleasure to express the unacceptable. SCW became a perfect outlet for the California Death Ray as it probed deep into the repressed desire zone just beneath the Age of Aquarius.

It was a time when California flower children blew soap bubbles, burned incense to forbidden gods and danced naked in the open air for camera crews. Many of them had the clap and some of them would overdose on psychedelic drugs, never to recover. It turned out that Captain Trips was just Satan’s bum boy, spreading a ‘wouldn’t it be nice’ virus which still lingers on today in new age notions and potions.

Clear sighted cynics such as the aforementioned Zappa, Burroughs and Southern eventually profited from the downfall of this phony liberation movement and many of the other comix artists moved into the lucrative worlds of art and commercial design. Wilson just faded away on the yellowed pages of time, remembered only as a footnote in the history of graphic perversion.

Following a series of accidents and afflictions in a dramatic two year period S Clay Wilson is now incapable of artistic expression or coherent speech. You might infer from this that the CDR is a cold machine without pity or remorse for those who serve it, yet Charles Manson, whose singing career somehow got sidetracked, currently receives better medical care than Wilson.

It seems that the devil is selective in his blessings