Stormageddon. Can the UK Learn from Sandy?

There are some parcels of land that Mother Nature owns, and when she comes to visit, she visits 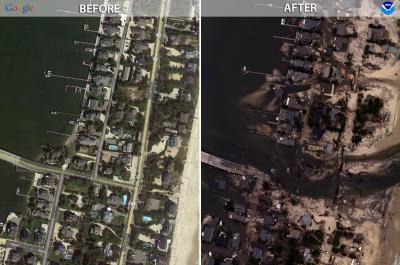 Spare a thought for the meteorologists who face everything now, from derision at their hysteria to anger at their inaccuracies. It all depends on whether you’re looking at a few overturned bins, or were on that bus that got blown off the road.

Just days before Hurricane Sandy hit the New York and New Jersey coastline on 29 October 2012, scientists from the City University of New York’s (CUNY) College of Staten Island had produced the most detailed model to date of the region’s potential for damage from big storms. So naturally, the morning after the floods receded from Staten Island, CUNY geology professor Alan I. Benimoff was out mapping the high-water marks in the flooded neighborhoods. There he discovered that his team’s pre-Sandy model had been right on the money.

Sandy caused 40 deaths and massive damage in New York City — yet future storms could be worse, according to Benimoff and his colleagues. At the 2013 Geological Society of America (GSA) meeting in Denver, they will describe how the combination of rising sea level and more frequent, more severe hurricanes could bring Atlantic water much higher.

Their new flood model predicts that Staten Island and Long Island would again flood in low-lying areas, such as South Beach, with their working-class neighborhoods and beachfront boardwalks, and could even surpass Sandy levels. In Manhattan, the storm surge could extend past the low areas that flooded in Sandy, which included Battery Park subway tunnels, the Financial District, and a 14th Street electrical substation.

of land that Mother Nature

owns, and when she comes

Since Sandy, Benimoff and Fritz, who is interim president of College of Staten Island, have been active in the community discussions about how — or whether — to rebuild on the most vulnerable parts of the barrier islands. They have developed five recommendations for area policy makers, emergency agencies and residents.

In public discussions, Benimoff does not mince words. As a scientist, he says, he has an obligation to communicate data clearly to non-scientists.

“To paraphrase our governor: There are some parcels of land that Mother Nature owns, and when she comes to visit, she visits,” Benimoff says. “The reality is that these particular barrier islands are uniquely vulnerable to storm surges. They have a lot of coastal and wetland that never should have been built on.

“What’s more, they have a geometry of coastline where Coney Island and Sandy Hook make a right angle with Staten Island right at the apex, and the seafloor comes up very gradually. Water piles up in that corner and has nowhere to go but inland. That means any storm that comes perpendicular to the coastline of New Jersey is going to put us in harm’s way.”

Protect the existing natural barriers — the beaches and dunes;
Build them higher;
Rezone in the flood zone to prevent home construction. Buy these properties and turn them into parks, which will sponge up the inevitable floodwaters and partially protect the islands’ higher lands. (There is precedent for this — after 157 people died in 1946 and 1960 tsunamis in Hilo, Hawaii, the most damaged neighborhoods were turned into parks.)
Be very careful about engineering solutions such as sea barriers because they will not only be expensive but also protect one stretch of beach at the expense of its neighbor. “Jetties, sandbars, seawalls — these are merely Band-Aids,” Benimoff says. “You’ve got to face the music here.”
Teach coastal residents how to survive a hurricane: Stay informed by watching weather forecasts. Evacuate early. Don’t seek refuge in basements, which could flood. Know your area’s high ground and, if faced with rapidly rising waters, go there.