Using entire galaxies as gigantic gravitational lenses, UA astronomers have obtained new measurements of some of the oldest galaxies in the universe and… Star Factories ! 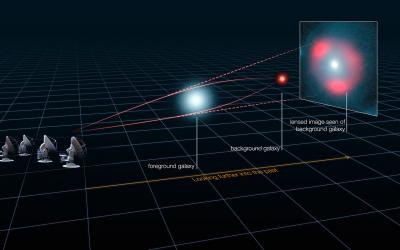 [dropcap style=”font-size:100px; color:#992211;”]W[/dropcap]ho says you can teach an old dog new tricks. There is still so much to learn about the universe : Star factories! Who wouldn’t want to second look?

Ah science, so amazing, so random.

Using entire galaxies as gigantic gravitational lenses, UA astronomers have obtained new measurements of some of the oldest galaxies in the universe and… Star Factories!

Some of the brightest galaxies in the universe – infant galaxies that churned out tens of thousands of stars each year at the dawn of the universe – evolved much sooner and in greater numbers than previously thought, according to new measurements obtained by University of Arizona astronomers. 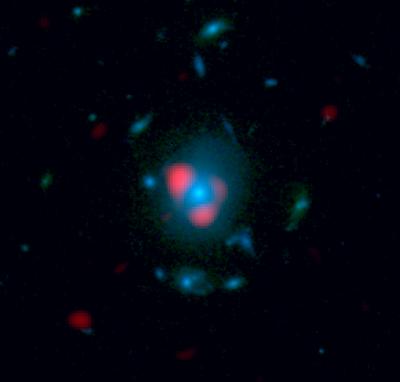 The results are published in a set of papers to appear in the journal Nature on March 14 and in the Astrophysical Journal. The research is the most recent example of the discoveries coming from the new international ALMA observatory, which celebrates its inauguration today.

ALMA, which stands for Atacama Large Millimeter/submillimeter Array, is an array of 66 radio telescopes located in the dry and cloudless Atacama Desert in Chile.

The most intense bursts of star birth are thought to have occurred in the early universe, in massive, bright galaxies. These starburst galaxies used to convert vast reservoirs of cosmic gas and dust into new stars at a furious pace – many hundreds of times faster than in stately spiral galaxies like our own Milky Way.

By looking far into space, at galaxies so distant that their light has taken many billions of years to reach us, astronomers can observe this busy period in the universe’s youth.

“Even though these galaxies are among the brightest objects in the universe, they are very hard to see with telescopes that detect visible light, such as the Hubble Space Telescope,” said Dan Marrone, an assistant professor at the UA’s Steward Observatory and a leading author on the publications.

The reason, Marrone explained, is that these young galaxies are enshrouded in thick clouds of dust. “Instead, we use ALMA to look for them in light coming from the dust itself. To ALMA, these are some of the brightest objects in the sky outside our own galaxy.”

The international team of researchers first discovered these distant and enigmatic starburst galaxies with the National Science Foundation’s 10-meter South Pole Telescope and then used ALMA to zoom in on them to explore the stellar baby boom in the young universe.

They were surprised to find that many of these distant dusty star-forming galaxies are even farther away than expected. This means that, on average, their bursts of star birth took place 12 billion years ago, when the universe was just under 2 billion years old – a full billion years earlier than previously thought.

[quote]we use ALMA to look

for them in light coming

from the dust itself.

To ALMA, these are some

of the brightest objects

in the sky outside

Two of these galaxies are the most distant of their kind ever seen – so distant that their light began its journey when the universe was only 1 billion years old. One of them appears to host the most intense burst of star formation that has ever been seen. Water molecules are also detected in that same galaxy, marking the most distant observations of water in the cosmos published to date.

The team used the unrivalled sensitivity of ALMA to capture light from 26 of these galaxies at wavelengths of around three millimeters. Molecules of carbon monoxide, a poisonous gas that is also the second most abundant molecule in the universe, are created in the star-forming gas in these galaxies and emit light at certain specific wavelengths.

These wavelengths are stretched by the expansion of the universe over the billions of years that it takes the light to reach us. By measuring the stretched wavelengths, astronomers can calculate how long the light’s journey has taken, and place each galaxy at the right point in cosmic history.

“The sensitivity of ALMA allowed us to do in a few minutes per galaxy what used to require hours or even multiple nights,” said Joaquin Vieira, postdoctoral scholar at the California Institute of Technology and lead author on the Nature paper.

The astronomers were using only a partial array of 16 of ALMA’s 66 giant antennas, as the observatory was still under construction at an altitude of 5,000 meters on the remote Chajnantor Plateau in the Chilean Andes. When complete, ALMA will be even more sensitive, and will be able to detect even fainter galaxies.

For now, the team targeted the brighter ones. It took advantage of a helping hand from nature, too: using gravitational lensing, an effect predicted by Einstein’s general theory of relativity, where light from a distant galaxy is distorted by the gravitational influence of a nearer foreground galaxy, which acts like a lens and makes the distant source appear brighter.

“Gravitational lensing causes the light from the distant galaxies to trace out a large, magnified circle around the lensing galaxy,” explained UA astronomy graduate student and coauthor Justin Spilker, who has been analyzing the ALMA data and helped create the images revealing the galaxies’ structure.

“This makes them much easier to see, and we use our understanding of gravity to take out the effect of the lensing and recreate the structure of the distant galaxy. The mass of these distant galaxies provides us with natural telescopes to view objects even further away.”

Analysis of the distortion reveals that some of the distant star-forming galaxies are as bright as 40 trillion (40 million million) suns, and that gravitational lensing has magnified this by up to 22 times.

Marrone, who is the principal investigator of the gravitational lensing portion of the project, explained that because only those super-distant galaxies can be discovered that happen to lie in perfect alignment with another galaxy that can act as a lens and the Earth, it is likely that they are much more abundant than previously thought.

“It has been thrilling to be among the first to use ALMA to study the very early universe,” added Spilker. “We are now trying to use the molecules we see to explain how and why these galaxies were so active, so soon after the Big Bang.”

Image 1:  This image combines data from ALMA and the Hubble Space Telescope. Shown in red is the distant, background galaxy, being distorted by the gravitational lens effect produced by the galaxy in the foreground, depicted as the blue dot seen by Hubble. The background galaxy appears warped into a so-called Einstein ring: a circle of light around the foreground galaxy. Credit: Dan Marrone