Spuds in Space: How to (Really) Grow Potatoes on Mars

[dropcap style=”font-size:100px; color:#992211;”]I[/dropcap]n The Martian, Matt Damon is forced to use his own body wastes as growing medium for his spudly sustenance.

However, given that his character is incompetent enough to get stranded on the red planet after succumbing to the effects of a Martian duststorm (the full effects of a hurricane in the thin Martian atmosphere might rival a wheezy consumptive armed with a hairdryer), there are probably easier ways to achieve a space-grow.

Lima, Peru, December 2015: A team of world-class scientists will grow potatoes under Martian conditions in a bid to save millions of lives.

The experiment, led by the International Potato Center (CIP) and NASA, is a major step towards building a controlled dome on Mars capable of farming the invaluable crop in order to demonstrate that potatoes can be grown in the most inhospitable environments.

The goal is to raise awareness of the incredible resilience of potatoes, and fund further research and farming in devastated areas across the globe where malnutrition and poverty are rife and climbing.

“How better to learn about climate change than by growing crops on a planet that died two billion years ago?” said Joel Ranck, CIP Head of Communications. “We need people to understand that if we can grow potatoes in extreme conditions like those on Mars, we can save lives on Earth.”

Currently, famine affects 842 million people around the world. Global warming creates poor soil conditions and increases the prevalence of pests and disease which have the combined effect of limiting harvests globally but particularly in vulnerable areas where poverty, malnutrition and food insecurity already exist.

For years, Peru-based global research and development organization, CIP, has been testing the robustness of potatoes in the most unlikely places. Beyond the ability to thrive in such challenging conditions, they are also highly nutritious. An excellent source of vitamin C, iron, and zinc, they contain critical micronutrients missing in vulnerable communities globally. CIP’s scientists use research and development innovations to fight malnutrition, lift people out of poverty and increase food security around the world.

Understanding atmospheric changes on the surface of Mars will help build more dynamic and accurate simulation centers on Earth, providing further research for both CIP and NASA, who are looking to pioneer space farming for future manned missions to other planets and moons in our solar system. 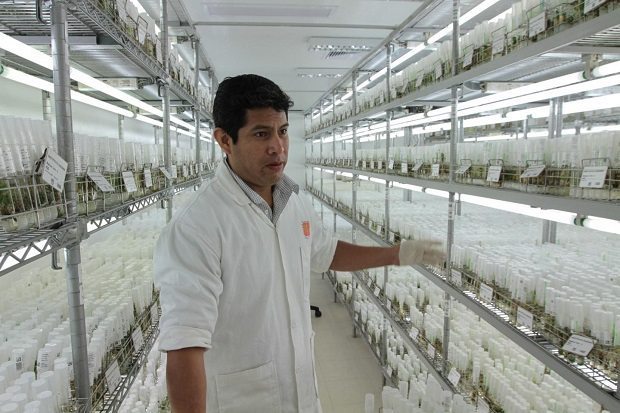 “I am excited to put potatoes on Mars and even more so that we can use a simulated Martian terrain so close to the area where potatoes originated.” said Julio E. Valdivia-Silva, SETI Researcher Associate of NASA, who is leading the project’s science team.

The project is led by Will Rust, Creative Director of Memac Ogilvy Dubai. He conceived the idea while working closely with CIP to spread the word of how the potato could be the answer to global hunger. Will connected the CIP and NASA teams to initiate this project to support life on Mars and to bring direct benefit to smallholder farmers on Earth who deserve more food secure futures as well.

By using soils almost identical to those found on Mars, sourced from the Pampas de La Joya Desert in Peru, the teams will replicate Martian atmospheric conditions in a laboratory and grow potatoes. The increased levels of carbon dioxide will benefit the crop, whose yield is two to four times that of a regular grain crop under normal Earth conditions. The Martian atmosphere is near 95 per cent carbon dioxide.

“The extraordinary efforts of the team have set the bar for extraterrestrial farming. The idea of growing food for human colonies in space could be a reality very soon.” said Chris McKay, planetary scientist of the NASA Ames research centre.

Melissa Guzman, Astrobiologist at NASA Ames, stated, “The image of students building plant growth payloads and communicating virtually from labs in California, Lima, and Dubai is exciting for the future of planetary exploration and astrobiology.

Next Story:
Is There Just Too Much of Everything?