Sonia Boyce and a Meta Criticism of the Critics

The Manchester Art museum and the disappearing/reappearing Nymphs, do we benefit from seeing them? or are we perpetuating tired tropes?

[dropcap style=”font-size:100px;color:#992211;”]S[/dropcap]onia Boyce has ruffled a lot of feathers recently and yet she has featured very sparingly or not at all in the write ups of her curatorial intervention at the Manchester Art Gallery. This omission, I suspect, is because her persona, rather humble professorial type, spoils the totalitarian censorship, or PC thug, or mad feminist angle that the established art critics have taken.

Using inflammatory language and hyperbole is seemingly preferable to our critics than looking at the nuances, or indeed offering balance.  Humour too has been absent in the angry responses. Analysis though would have been best and its also what we should expect from them, rather than goading remarks to stoke up contempt.

Boyce had the image ‘Hylas and the Nymphs’ a work of 1896 by the Pre-Raphaelite John William Waterhouse removed to question ‘outdated and damaging stories’ about woman. It all seems very tame stuff, absolutely in line with the #MeToo vibe that’s also a media favourite. Then to my surprise and I suspect to Boyce’s, the whole world and his aunt decided to get really very upset about it!

When the Guerrilla Girls posed the question, ‘Do woman have to be naked to get into the Met. Museum? They might never have imagined that getting clothed women in was just as hard as getting naked ones out!

I have found myself rather warming to Sonia Boyce’s intervention although the resulting commotion it provoked may be because communication of why this was happening was a little sketchy. Many thought the piece was censored for good but more likely it’s because its a brilliant reason to have a go at the ‘new puritanism,’ aren’t we all feeling a little bruised metaphorically speaking at the persistence of the media coverage of sex scandals? Enough to over react to a fairly routine bit of curation. We’ve been had by the galleries PR department, and the estate of Waterhouse should surely write a thank you note to Boyce!

Tick Tock The Tin Men (and woman) of Contemporary Copy

Like clockwork respected critic Edward Lucie-Smith declared ‘welcome to the new puritanism’ in a LinkedIn post promoting a piece in art news. Other experts waded in like Jonathon Jones (TICK) of the Guardian bemoaning the slippery slope of censorship,

“To remove this work art from view is not an interesting critique but a crass gesture that will end up on the wrong side of history,”

Rachel Johnson (TOCK) writing in the MOS was appalled,

“We are already in a living nightmare of political and historical correctness, but to retrofit ‘artistic correctness’ on top is a step too far back to the neo-Victorian age,”

So Jones on the left I think? is feeling his civil liberty is threatened and Johnson on the right, or is it the middle (wait which way is the wind blowing…) is living in a ‘nightmare’ typified by the removal of this work, (dear me let’s hope we never have another Blitz she’ll be dead before the bombs hit the ground!) 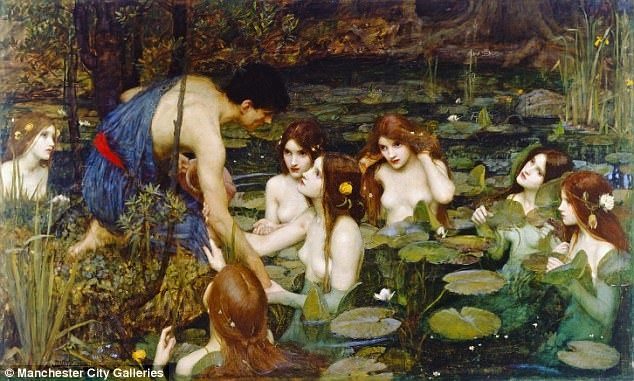 In all my time as a teacher of art history I have never heard ‘Hylas and the Nymphs’ mentioned once as an example of anything except a secondary work, and now like good little libertarians the custodians of the public taste will all defend our right to look at over varnished naked ladies in a tired old format (that’s not to say the Pre-Raphaelites were bad, they produced many passionate works, this is not one of them though)

What sensitive little canneries these critics are, the first molecules of stifling air and they are all choking and we all have to hear about it! Their actions are mechanical, and they seem incapable of analysis reacting away like jerking knees aiming their boot at the arse end of some imagined dungareed PC thug.

WHAT IS THE POINT OF A CRITIC, if all they do is write slightly better ‘reactions’ then the people who read them, encouraging all the arm chair pundits who haven’t entered a gallery in years to get red faced about this non-colossal event!

The painting is back now and it emerged that the whole thing was a bit of rouse anyway, or is that what the PC puritans want us think as the slink away defeated to fight again? Perhaps next time they will rob us of Geordie Shaw and we can watch as Jones and Johnson ‘tick tock’ into action evoking Nazism and totalitarian references to give gravitas to their copy. What a shower of, well, nonsense.

Art does effect society (I hope)

The removal though may have sparked some useful debate and while my own first instinct was to sigh with the banality of it all I did find myself thinking what does ‘Hylas and the Nymphs’ actually say? I remember watching a clip of Quentin Tarrentino getting very annoyed that Krishnan Guru-Murthy (a British news presenter) asked him about violence in film, Tarrentino’s response was defensive and unconvincing and seemed to cheapen the importance of film altogether and while Boyce’s intervention has all the hallmarks of dreary PC point scoring the over reaction is perhaps far more telling, and worthy of criticism.

Tarrentino was happy to junk the effects of film on society if it absolved him of any blame at all regarding the state of the nation! If film has no influence over people then what is the point of it then? Surely the great director holds his medium in higher regard? If not then Its entertainment a distraction at best and all pretences to higher cathartic experience should be dropped.

The Force of Images

Images, art, wallpaper all do lend force to some value don’t they? They perpetuate types and ideas, so violent films, sexualised paintings all play their part in moulding the crevasse that we find ourselves poured into at birth. Its perhaps then a little mean to simply condemn Boyce instead let’s ask what does this painting lend force to and how does that speak to us now?

The strange truth is that almost every other advert or reality show on television perpetuates oversexualised, passive and/or superficial stereotypes of men and woman. These programs though are sadly out of Boyce’s reach, so we are stuck with that hopeless drivel spurting from the television into our front rooms.

The painting depicts the temptation of the Argonaut Hylas by beautiful nymphs just before his drowning. Its not a progressive image even by the standards of the time. The same year saw work by Picasso, Pissarro and Gauguin all trying in their own way to push the boundaries of art practice while Waterhouse was trading in the stilted style the Impressionists would later react against.

Ways of Seeing (is worth remembering)

John Berger for example taught that the almighty full stop to this kind of work was Manet’s The Luncheon on the Grass (Le déjeuner sur l’herbe) painted in 1863, 33 years before Waterhouse’s image.

Manet, ‘The Luncheon on the Grass’1863 (Le déjeuner sur l’herbe)

For Berger the Manet’s painting so blatantly revealed the dynamic which was at work in much western painting in which woman were a commodity, the glance outward from the naked woman embarrassed the contemporary audiences and was Manet’s way of insulting the kind of people who inhabited the salon. The lady in Manet’s work is far more dangerous than the Nymphs could ever be since the implications of her stare are with us in reality, rather than in a fantasy escapist world luring a mythical man to his doom.

The question for us is to decide how much we have to take responsibility for what we show and in what context. Does it matter? If it doesn’t than publicly funded art institutions don’t deserve their status or funding. I don’t think that works should be hidden away, but the rather ordinary sexuality expressed in the painting is just not that interesting you could look at the chocolate box picture with your grandparents without blushing. The same is not true of Manet’s works. Boyce’s blank space after all evoked more interest than ‘Hylas and the Nymphs’! The second thing is to consider the useless covering of the intervention which just gave our pundits a chance to puff themselves up like angry little Robins.

You can see more of Boyce’s work here.

Next Story:
New Reasons to be Depressed Confirmed! :(