‘Site Unseen’ is a group show inaugurating the new exhibition premises of Dellasposa in Lancaster Gate.

A New Space for Contemporary Art

It presently showcases the work of eight emerging contemporary fine artists. The gallery comprises a number of discrete spaces over two floors and the layout generously accommodates paintings, sculptures, and prints – one area being given over to modern masters, with two lithographs by Picasso, an etching by Giacometti, and a lithograph by Matisse.

Interestingly, this isolated space anchors the mixed show that flows around it; each of the contemporary artists having a connection with the modernism of a century past.

Darren Coffield’s contribution is developed from his interest in Gestalt psychology and its concerns with face recognition and the more centrally artistic concern with pictorial space.

Working on jigsaw puzzle boards, die-cut boards upon which Coffield attached prints, or used collages of torn images, or painted directly onto the boards, so that the resulting image was an assembly of constitutive pieces, allowed him to re-arrange the assembly. You take a bit out of this picture plane and replace it with the same shape from another jig-saw.

Imagine three or more pictures, each on the same cut-out format. You can then redistribute the pieces of one into that of another. And so a fragmented world appears – a series of dislocations present themselves.

Coffield regards this as entertaining different picture plains, different picture spaces, in one and the same work; so that the spectator jumps between spaces. We think of our loved ones when we are standing in the rain waiting for the night bus. The actual space we are in gets penetrated by thoughts that belong in another space: elsewhere. The human ability to penetrate perception with imagination is at the heart of most art including painting, music, architecture and poetry. Wew think of one thing and overlay it with thoughts of another. In the visual arts we use our perception of one thing to imagine the look of another. And the worlds we imagine  accommodate us.

It is a predominant feature of modernism, that it requires attention from the spectator; and much psychology, and the philosophy of psychology, concerns itself with the kind of attention and the kind of construction that enters into quite normal perception; so that we now understand that perception is not merely the passive reception of data input.

Groups of participants in one experiment were asked to watch and listen to a film presentation which overlaid two different scenic and audio narratives – a conflation of two films. The participants were to attend to one or other of the filmic aspects. The great majority of were able to attend to the narrative they had been assigned. They could answer questions about their narrative without having any idea about the alternative narrative with which it had been mixed.

The result of this experiment provides evidence that perception is at least in part made up of a contribution – a sorting out and holding together – of the narrative by the spectator; and a filtering out of perception, those aspects irrelevant to the task assigned.

In face recognition, we seek out human faces from an assorted landscape of colours and textures. Further psychology experiments provide evidence of part-whole face recognition processing. In what is now known as the Thatcher effect, we more easily recognise features the right way up than we do when the face is inverted. Here is a light-hearted look at the Thatcher illusion or the Thatcher Effect, as it was named by Peter Thompson, Professor of Psychology at the University of York in 1980. The phenomenon lies at the centre of the study of face perception.

In their research article, ‘The role of holistic processing in face perception: Evidence from the face inversion effect’, published in Vision Research, Jessica Taubert, Deborah Althorp, David Aagten-Murphy, and David Alais consider the relationship between part and whole in first and second order processing of face recognition. (Taubert, Althorp, Aagten-Murphy and Alais 2011). Here is their published abstract,

A large body of research supports the hypothesis that the human visual system does not process a face as a collection of separable facial features but as an integrated perceptual whole. One common assumption is that we quickly build holistic representations to extract useful second-order information provided by the variation between the faces of different individuals. An alternative account suggests holistic processing is a fast, early grouping process that first serves to distinguish faces from other competing objects. From this perspective, holistic processing is a quick initial response to the first-order information present in every face. To test this hypothesis we developed a novel paradigm for measuring the face inversion effect, a standard marker of holistic face processing, that measures the minimum exposure time required to discriminate between two stimuli. These new data demonstrate that holistic processing operates on whole upright faces, regardless of whether subjects are required to extract first- or second-level information. In light of this, we argue that holistic processing is a general mechanism that may occur at an earlier stage of face perception than individual discrimination to support the rapid detection of face stimuli in everyday visual scenes.

Gail Olding’s, ‘The First The Last The Beginning and The End’ is a narrative sculpture that continues her work as a feminist sculptor. The vessels arranged along a shelf look like funerary urns. Seven in all, the centre piece, a black macabre presence between three white vessels either side, is perched upon by a black life-like crow. The two end pieces are settled upon by two budgerigars. That bird-instills tension. It also brings a note of menace – the crow looking like some evil masculinity – as if death itself is a patriarchal weight upon femininity.

Gail Olding, ‘The First, The Last, The Beginning and The End’, mixed media, 2017

In her second piece, a matt black, phallic, unspent artillery shell, of around a meter in height, is crowned with thorns. Patriarchy’s ugly (war) head resisting Christ’s sacrifice which, we were told, ‘[took] away the sins of the world’?

The smokey image, of the gathering storm, of the wastes of war, of whatever darkness you care to be haunted by, takes up the modernist attention to process. That is to say that the process of making the work becomes, in large part, the content of the work. We become interested in how such an image could have come to be. Jackson Pollock was an exemplary process painter. In this country David Tremlett uses the sweat from his hands as a medium gluing the pure pigment to the walls of his installations; whilst Noel Forster made rules that would make his ambidextrous paintings into ‘schemes’ of paintings or his unravelling of a silk roll with a continuous painted line along its length became a process of exhibition. 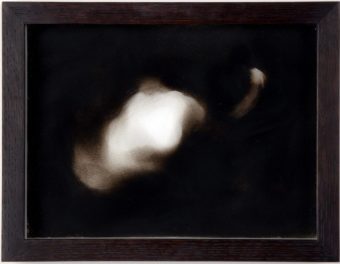 Haddon’s smoke drawings are beautifully crafted pieces. His sculptures invoke clouds or plumes and offer the experience of seeing something quite indefineable. (We talk of a plume of smoke but we hardly know wqhere it begins or where we might locate its edge.)

The smoke drawings are made from the soot of  paraffin-wax candles. So, the paper upon which they are captured is positioned and moved so as to collect the soot carried in vapourised paraffin, which then, cooled, is bonded to the surface by the congealing of the spirit medium.

The surfaces are intense velvet blacks, more even and deep than the aquatints they evoke. These are more sensual in the pleasures they afford, but that is a strand of modernism exploited by Anish Kapoor, as well as Tremlett and others. 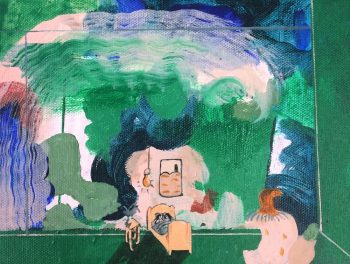 Lonsdale’s paintings are strange spaces in which dream-like situations unfold on the painted stage. There are influences from Fancis Bacon and perhaps other artists have been background or subliminally important. We think of Marc Chagall and of Alan Davie. The pictures are delightful intrigues that anyone with a heat might want to climb inside. Suddenly in the midst of a densely coloured interior, a naked light-bulb is drawn in paint, so that the we flicker between types of picture and find ourselves disorientated in the imaginative process.

Dellasposa Gallery has  collected together young artists who represent a new phase of modernism, and demonstrate the rich variety of work that continues in the many paths modernism opened up. The work of the eight exhibiting artists is of consistently good quality and it will be interesting to see how the gallery and these artists progress.