Images of every kind bombard us daily with information, persuasion and delight. The ‘image stream’ as John Stezaker, the collage artist has called it, is intoxicating in its delivery of pictures and other visual sensory input.

Identifying an image of the second suspect

On October 9th, Sky News reported that the rather spooky ‘Bellingcat’ investigative agency had revealed the identity of the second Russian spy allegedly involved with the attempted murder of the Skripals. He was named as Alexander Yevgenyevich Mishkin, a high ranking member of the GRU, the Russian intelligence service, and a doctor.

Sky News dutifully provided a three-image strip of Mishkin, taken from identity cards, including one from the false passport under which he entered the UK, issued under the name of Alexander Petrov.

The two presenters then stood in front of (and to the side of) the images to discuss the nature of the UK government’s likely response; and the chances (extremely slim) of the two spies being extradited to Britain to stand trial.

What was fascinating about this section of the morning news was the complexity of the pictures; and especially as to how it relates to certain entrenched views of the image.

In the case of the three identity card photographs, we are meant to identify the same man across three different images of his face, at least two of which claim to identify separately Mishkin and Petrov. The evidence, we are to assume, is that the same face has been falsely identified in the case of Petrov. Petrov is Mishkin.

We see that the two photographs are of the same man. How so? There are currently two methods of identification. There is algorithmic measurement by artificial intelligence; and then there is the more straightforward human capacity for face-recognition.

Wittgenstein on the Image and Recognising

Looking at the pictures presented by Sky, I am reminded of Wittgenstein’s comments.

“I meet someone whom I haven’t seen for years; I see him clearly, but fail to know him. Suddenly I know him, I see the old face in the altered one. I believe that I should do a different portrait of him now if I could paint.

Now, when I know my acquaintance in a crowd, perhaps after looking in his direction for quite a while, – is this a special sort of seeing? Is it a case of both seeing and thinking? or an amalgam of the two, as I should almost like to say?

When the two presenters stand in front of the three identity photographs, another aspect of the image comes to the fore. For some time (and indeed the discredited view persists in some quarters) seeing the image is like seeing the person. So that, an illusionistic view of the image is upheld. When we look at a picture we undergo an illusion as of ‘seeing the content’ of the image.

The television news, however, relies upon our being able to recognise Mishkin, even when he has the identity of Petrov. That is, we are supposed to be able to see the content of the photograph ‘in-the-photograph’ as that appears on our television screens. So, the illusionist view would have to claim that we see three faces, each of the same man, all huge by comparison to the two presenters. Add to this that only the central photograph in the three identity pictures is in colour. So now we have three faces of giants, two of whom, whilst looking like the third, are in black and white.

Wittgenstein writes of our interpretive seeing of a black and white photograph,

679. This need not have been so. We could easily imagine people who did not have this relation to our pictures. (W ho, for example, would be repelled by our photographs because a face without colour is sinister and ugly.) [PI, II, xi, p. 205e] (Wittgenstein 1982)

The treatment is slightly different in Philosophical Investigations, where it is written,

[W]e regard the photograph, the picture on the wall, as the object itself (the man, landscape, and so on) depicted there.

This need not have been so. We could easily imagine people who did not have this relation to such pictures. Who, for example, would be repelled by photographs, because a face without colour and even perhaps a face reduced in scale struck them as inhuman. (Wittgenstein 1963, 205e)

Sky News presenters in front of three photographs of Mishkin

So in this last image we see two enlarged in scale faces in black and white and one in colour framed by two ‘normal sized’ people. The enlarged photographs of Mishkin cannot be given an illusionistic interpretation. Wittgenstein is right to say that we treat photographs as if they were the things they depict. (The black and white photograph of my wife smiles down upon me when she is working abroad.) But this stops well short of the naïve illusionistic view: that pictures present their content as phenomenologically encountered in the seeing. 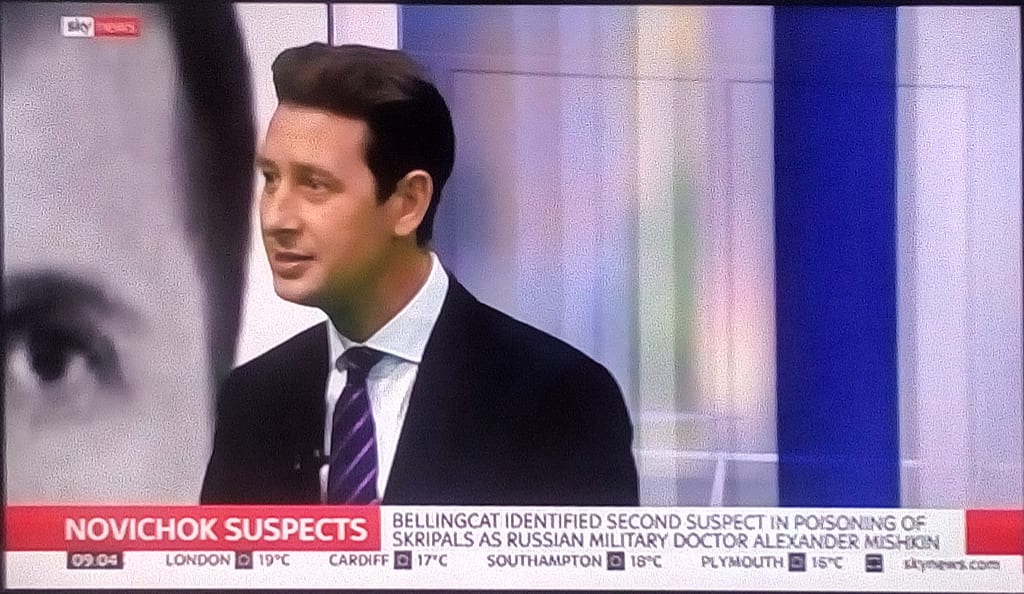 Sinister indeed, to have an enormous monotone Mishkin staring at you, over your right shoulder.