[dropcap style=”font-size:100px; color:#992211;”]R[/dropcap]
eports from UK scientists warn that our favourite creaky old denizen of the deeps is outgunned, in danger of extinction, and in need of a complete re-evaluation and rescue operation.

Scientists from the University of Exeter are warning of the risks that seismic surveys may pose to sea turtles. Widely used in marine oil and gas exploration, seismic surveys use airguns to produce sound waves that penetrate the sea floor to map oil and gas reserves.

The review, published in the journal Biological Conservation, found that compared to marine mammals and fish, turtles are largely ignored in terms of research attention and are often omitted from policy guidelines designed to mitigate the environmental risks of seismic surveys.

Possible ramifications for turtles include behavioural changes and exclusion from critical habitats as well as potential auditory damage, as turtle hearing ranges overlap with airgun frequencies. In addition, turtles are known to become entangled in gear towed behind the survey vessel, which can lead to drowning.

Lead author Sarah Nelms from the Centre for Ecology and Conservation at the University of Exeter’s Penryn Campus in Cornwall said: “By talking to oil and gas companies, seismic operators and on-board Marine Mammal Observers, as well as academics and conservationists, we had a great opportunity to gather a broad spectrum of opinions, not just one side of the story. This allowed us to access information that was not available in the published literature.”

The researchers also examined policy guidelines for the mitigation of risk to marine life in seismic surveys and assessed peer-reviewed literature on the topic. 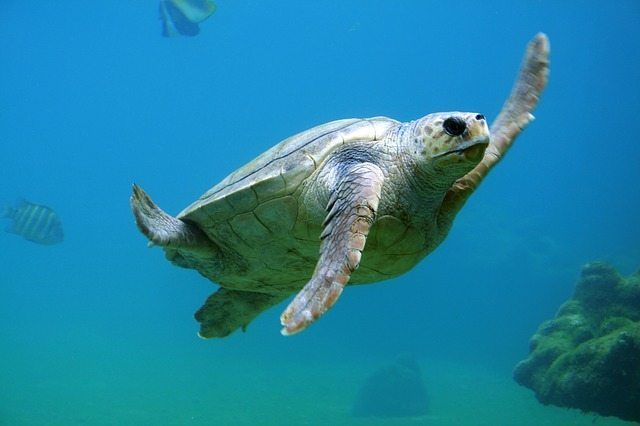 “Our study reveals the potential for seismic surveys to cause behavioural changes and physical harm to turtles and we are calling for more research to urgently fill the crucial knowledge gaps that were highlighted during our review,” said Ms Nelms.

During a survey, specialised ships simultaneously fire multiple airguns while towing multiple hydrophone streamers, which can cover an area up to 700m wide and 12km long, to capture the returning sound waves. Researchers involved in the study received reports of turtles becoming entangled in the trailing tail buoys and developed a turtle guard which has been voluntarily installed by some operators. Further research could help make such preventative measures mandatory in the future.

Senior author Professor Brendan Godley, also from the University of Exeter’s Centre for Ecology and Conservation, said: “Seismic surveys are occurring in the waters of at least 50 countries in which marine turtles are present and they are becoming increasingly widespread. Given the conservation status of turtles, we feel that it is important and timely to assess the level of threat posed by this global activity and highlight knowledge gaps to direct future research efforts.”

“There is a great deal that could be done proactively to help improve the status quo. We are standing by to work with seismic companies and others in the oil and gas sector to this end.”

The researchers hope that their findings will assist with the development of policies to minimise the impact of seismic surveys on marine turtle populations, for example ensuring that they are not carried out during sensitive times or in critical areas, such as during breeding seasons or in foraging grounds.

Previous Story:
Are You Feeling Intimate At The Back? John Grant, Hammersmith Apollo

Next Story:
The stuff of life (The Eagles of Death Metal)