Psilocybin relieves anxiety and depression in patients with advanced cancer

[dropcap style=”font-size:100px; color:#992211;”]I[/dropcap]t is gratifying, in a way, to see ill-researched legislation finally relaxed so that clinical testing can be done on naturally-occuring medicines.

With caveats, of course. Psilocybin as an anti-depressant? Well, durr. Sometimes a few thousand years of common useage does have an established logic to it, regardless of whether the governments or pharmaceutical industries of the last few decades are willing to endorse it or not. We’ve been using this stuff for millenia, we know what it’s good for.

The downsides: if synthetic cannabis is any harbinger of form, the pharmaceutical companies will now embark on a race to isolate and patent the active ingredients of our humble magic mushroom, and chemically synthesise a lesser form of dosage which ignores the ‘entourage effect’ of the natural version’s other components. It’s what they did with THC, despite the weary protest of cannabis users worldwide pointing out that it’s also the CBD, CBN, THCV and natural terpenes of weed which provide the effect.

Arrogant and blinkered, the pharmaceutical industry? Surely not.

As for the BigPharma intellectual copyright landgrab on the faithful ‘shroom? Well, they probably spend more time on golfcourses than they typical shroomer anyway. May as well pick a few whilst they’re there.

When combined with psychological counseling, a single dose of a mind-altering compound contained in psychedelic mushrooms significantly lessens mental anguish in distressed cancer patients for months at a time, according to results of a clinical trial led by researchers at NYU Langone Medical Center.

Published in the Journal of Psychopharmacology online Dec.1, the study showed that one-time treatment with the hallucinogenic drug psilocybin — whose use required federal waivers because it is a banned substance — quickly brought relief from distress that then lasted for more than six months in 80 percent of the 29 study subjects monitored, based on clinical evaluation scores for anxiety and depression.

The NYU Langone-led study was published side by side with a similar study from Johns Hopkins. Study results were also endorsed in 11 accompanying editorials from leading experts in psychiatry, addiction, and palliative care.

“Our results represent the strongest evidence to date of a clinical benefit from psilocybin therapy, with the potential to transform care for patients with cancer-related psychological distress,” says study lead investigator Stephen Ross, MD, director of substance abuse services in the Department of Psychiatry at NYU Langone.

“If larger clinical trials prove successful, then we could ultimately have available a safe, effective, and inexpensive medication — dispensed under strict control — to alleviate the distress that increases suicide rates among cancer patients,” says Ross, also an associate professor of psychiatry at NYU School of Medicine.

Study co-investigator Jeffrey Guss, MD, a clinical assistant professor of psychiatry at NYU Langone, notes that psilocybin has been studied for decades and has an established safety profile. Study participants, he says, experienced no serious negative effects, such as hospitalization or more serious mental health conditions.

Although the neurological benefits of psilocybin are not completely understood, it has been proven to activate parts of the brain also impacted by the signaling chemical serotonin, which is known to control mood and anxiety. Serotonin imbalances have also been linked to depression.

For the study, half of the participants were randomly assigned to receive a 0.3 milligrams per kilogram dose of psilocybin while the rest received a vitamin placebo (250 milligrams of niacin) known to produce a “rush” that mimics a hallucinogenic drug experience. 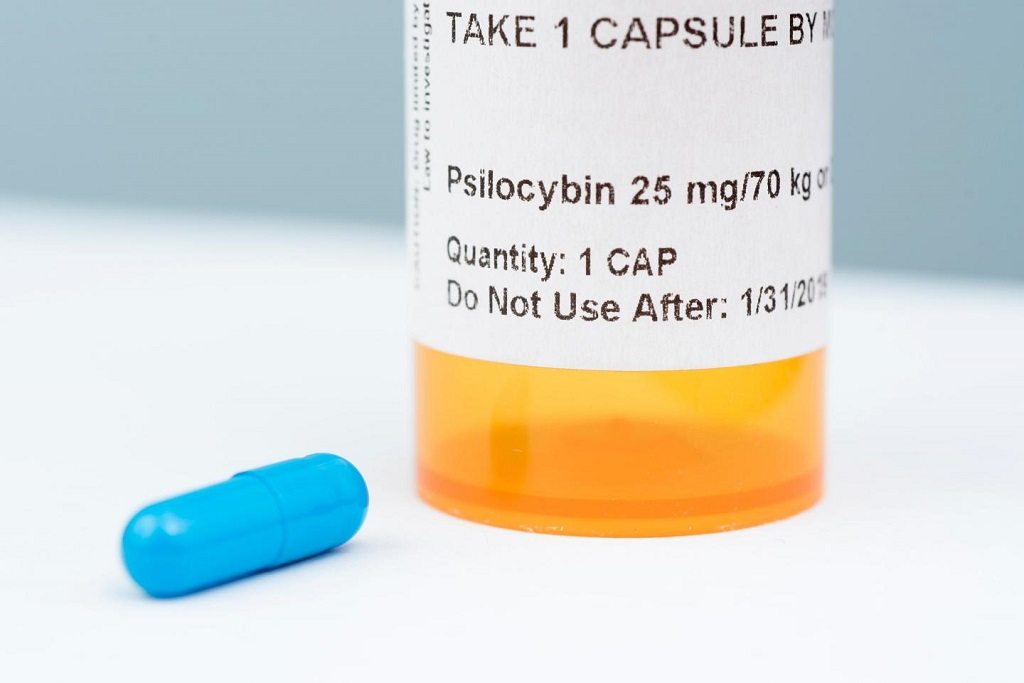 Approximately half way through the study’s monitoring period (after seven weeks), all participants switched treatments. Those who initially received psilocybin took a single dose of placebo, and those who first took niacin, then received psilocybin. Neither patients nor researchers knew who had first received psilocybin or placebo. Guss says, “The randomization, placebo control, and double-blind procedures maximized the validity of the study results.”

One of the key findings was that improvements in clinical evaluation scores for anxiety and depression lasted for the remainder of the study’s extended monitoring period — specifically, eight months for those who took psilocybin first.

All patients in the study — mostly women age 22 to 75 who are or were patients at the Perlmutter Cancer Center of NYU Langone — had either advanced breast, gastrointestinal, or blood cancers and had been diagnosed as suffering from serious psychological distress related to their disease. All patients, who volunteered to be part of the study, were provided with tailored counseling from a psychiatrist, psychologist, nurse or social worker, and were monitored for side effects and improvements in their mental state.

“Our study showed that psilocybin facilitated experiences that drove reductions in psychological distress,” says Bossis. “And if it’s true for cancer care, then it could apply to other stressful medical conditions.”

Bossis cautions that patients should not consume psilocybin on their own or without supervision by a physician and a trained counselor. He also says “Psilocybin therapy may not work for everyone, and some groups, such as people with schizophrenia, as well as adolescents, should not be treated with it.”

Next Story:
What Does Anger Sound Like to Children?